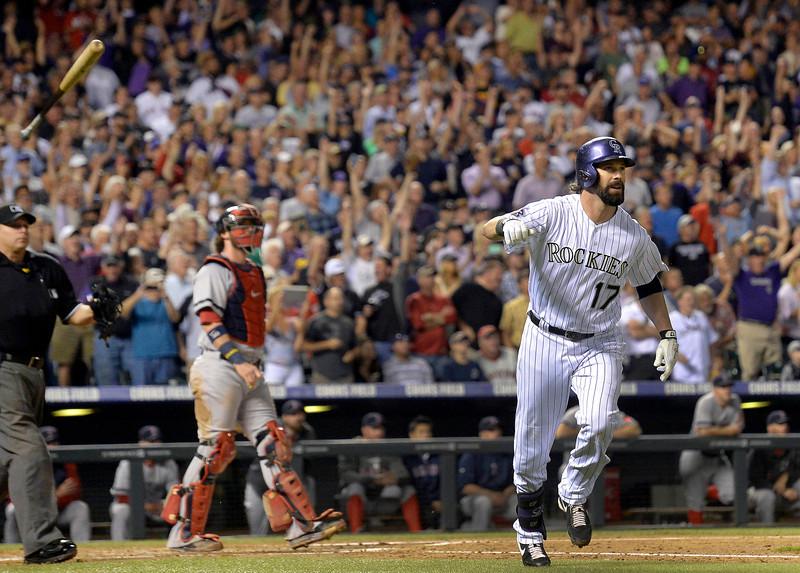 The following is the second of a five-part series celebrating the top 25 memories, players, milestones and headlines of the first quarter-century of the ballpark in LoDo:

No. 20, Catcher Brett Mayne notches a “W,” Aug. 22, 2000: It’s unusual for a position player to pitch in a major league game. It’s even rarer when a catcher pitches. It’s historic when the catcher gets the win.

But that’s what happened when Mayne delivered in the 12th inning against the Atlanta Braves. Mayne, unable to catch because of strained ligaments in his left catching hand, became the first position player in 32 years to record a big-league pitching victory. Mayne stranded two runners by retiring Chipper Jones on a check-swing grounder for the final out.

“I didn’t like the way things were looking right there,” Mayne deadpanned. “But then my movement took over.”

Rocky Colavito had been the last position player to win a game from the mound, pitching 2 ⅔ shutout innings as the Yankees defeated Detroit on Aug. 25, 1968.

“I was born that year,” Mayne said.

No. 19, Nine-run ninth sinks the Cardinals, July 6, 2010: The improbable is always possible at Coors Field. And so on a rainy night in LoDo, the Rockies erased a six-run deficit in the ninth to upend the St. Louis Cardinals on Seth Smith’s two-out, three-run, walk-off homer.

“It’s the best comeback I have ever been associated with,” Rockies manager Jim Tracy said.

“Hideo Nomo has done what they said could not be done … Not in the Mile High City. Not at Coors Field in Denver. He has not only shut out the Rockies, he has pitched a no-hitter. And thank goodness they saw it in Japan.”

How improbable was it that Nomo should no-hit the Rockies at Coors Field? Teams combined to post a 7.06 ERA at Coors in 1996, which was not only the highest in the majors that season, but it remains the highest ERA for any individual ballpark in a single season in major league history.

The game was supposed to start at 7:05 p.m. but Denver was slammed with thunderstorms. After a two-hour rain delay, umpire crew chief Bill Hohn decided that conditions were good enough to play ball. The official attendance was 50,066, but only about 30,000 fans endured the rain delay and a 46-degree temperature to watch the only no-no in Coors Field history.

The heavy air seemed to deaden hard-hit balls and after the game, Dodgers catcher Mike Piazza said: “It was a little muggy and the ball didn’t carry as well as it usually does here.”

Broncos Draft Board: “All-around” receiver Jerry Jeudy would be able to contribute immediately

EDITOR’S NOTE: One of a series of profiles on draft prospects who would fit the Broncos’ needs. Catches on consecutive plays of his final college game exhibit why Alabama receiver Jerry Jeudy shouldn’t get past the Broncos in next month’s NFL draft. The Crimson Tide led Michigan 21-16 early in the fourth quarter. Third-and-11 from […]

Pac-12 in the age of COVID-19: Coaches, athletes use social media to spread the word about stopping the spread

Prohibited from taking the field, court, pool, course, track and trails — and any other competitive surface — Pac-12 coaches and athletes have been active on social media during the COVID-19 shutdown. And they have been active with a purpose, producing dozens of Public Service Announcements aimed at encouraging fellow students and the general public […]

Raiders’ Marcus Mariota: ‘This is Derek’s team. I understand that’

If you thought Marcus Mariota was going to throw down the gauntlet, then you know nothing about Marcus Mariota. Mariota is not a guy who makes waves, as evidenced by the way he graciously supported Ryan Tannehill with the Tennesee Titans after being deposed as the starting quarterback. So it came as no surprise Tuesday […]