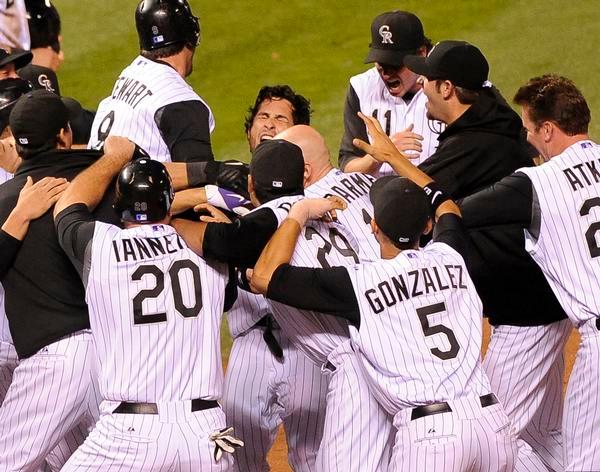 The following is the third of a five-part series celebrating the top 25 memories, players, milestones and headlines of the first quarter-century of Coors Field.

Mike Lansing’s cycle at Coors wasn’t the most dramatic in history, but it was the fastest. The Rockies infielder completed his laps by the fourth inning. He ripped a triple in the first inning, launched a two-run homer in the second, hit a two-run double in the third and singled in the fourth. For the record, the Rockies bludgeoned the Diamondbacks 19-2 and Lansing drove in five runs in front of a Father’s Day crowd of 48,117.

“We really couldn’t do anything wrong,” Rockies manager Buddy Bell told The Denver Post. “The beatings in ‘Gladiator’ weren’t this gory.”

No. 14, Blackmon goes from bubble to stardom, April 4, 2014: It’s hard to fathom now, but outfielder Charlie Blackmon was on the roster bubble in the spring of 2014. That changed dramatically in the Rockies’ 12-2 home-opening win over the Diamondbacks when Blackmon became:

• The first big-league player to go 6-for-6 with a homer and three doubles on opening day.

• The first player since the Pirates’ Dick Groat in his MVP season of 1960 to have three doubles among six hits in a game.

• The first leadoff hitter with six hits in a game since Ian Kinsler did it for the Rangers on April 15, 2009, and the 19th leadoff hitter in history with that many hits in one game.

“Sure, I have had six hits before. I remember one game in whiffle ball in 1989,” Blackmon quipped.

Blackmon went on to hit .288 with 19 home runs and become an all-star for the first time.

No. 13, the “Gray Wolf” howls, Sept. 17, 2016: By the end of the Rockies’ 8-0 victory over the helpless Padres, Jon Gray had pitched one of the most dominant games in team history and rewritten the franchise record book. He struck out a club-record 16 batters, the most in Coors Field history. Whom did he bypass? None other than Hall of Fame left-hander Randy Johnson, the former Arizona pitcher who whiffed 14 Rockies at Coors Field on May 13, 2001.

“Jon was unbelievable,” said third baseman Nolan Arenado. “That’s probably the best pitching performance I’ve ever played behind. I didn’t even have to make any plays, because he struck out everyone. But his intensity out there tonight was amazing.”

Gray entered the ninth inning with 14 strikeouts, tied with the late Darryl Kile for the Rockies’ franchise record. Victim No. 15 was pinch-hitter Adam Rosales, who watched as a 97.7 mph fastball whizzed by. Victim No. 16 was Ryan Schimpf, who whiffed on a 91.2 mph slider to complete Gray’s shutout. It was Schimpf’s fourth strikeout of the game.

Jameis Winston to the Broncos? Here’s what one oddsmaker says.

Joe Robbins, Getty ImagesJameis Winston (3) of the Tampa Bay Buccaneers throws a pass against the New Orleans Saints in the fourth quarter of a game at Raymond James Stadium on Dec. 31, 2017 in Tampa, Fla. The Buccaneers won 31-24. While the NFL’s quarterback carousel continues to turn with Tom Brady heading to Tampa […]

Sharks’ Logan Couture talks Jumbo, his book club and shelter in place: “We’re all in it together”

Like other residents of the region, Sharks captain Logan Couture has spent most of the last two weeks inside at home under a statewide shelter in place mandate put in place to help slow the spread of COVID-19. In the times Couture has gone out, to pick up food at a local restaurant or get […]

Broncos Draft Board: Temple center Matt Hennessy will lean on experience if asked to start right away in NFL

As he cycled through three head coaches, offensive line coaches and strength coaches apiece during his four years at Temple, center Matt Hennessy figured the constant change would benefit him. “Being able to adapt to the different systems has been my biggest strength,” he said. “As soon as I’m introduced to something (in the NFL) […]