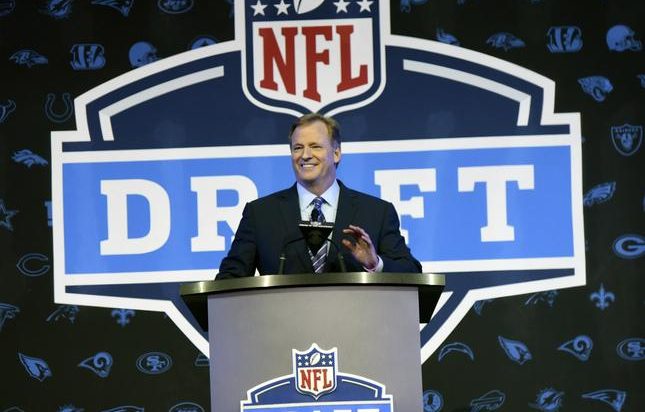 The coronavirus couldn’t stop NFL free agency and it won’t prevent the NFL Draft from being held as planned, commissioner Roger Goodell confirmed to teams in a memo Thursday.

Goodell said the NFL Management Council Executive Committee met earlier Thursday and the group was “unanimous and unequivocal that the draft should go forward as scheduled,” from April 23-25, he said in the memo procured by ESPN’s Adam Schefter.

Commissioner Goodell sent out a memo to NFL teams tonight that the draft will go on April 23-25. pic.twitter.com/tYlHo3fKqC

The NFL joins the WNBA in speeding ahead with its original draft plans. The WNBA announced Thursday its draft will happen as expected on April 17, where ex-Miramonte High star Sabrina Ionescu is expected to be selected first.

The status of other major sports drafts isn’t as clear. The NBA Draft, scheduled for June 25, will be held much later this summer at the earliest. The NHL announced Wednesday its draft, originally set for June 26-27 in Montreal, has been postponed indefinitely.

In his note Thursday, the NFL commissioner also noted the annual draft show could provide a much-needed sense of normalcy in the wake of the effects of the COVID-19 pandemic.

“I also believe that the draft can serve a very positive purpose for our clubs, our fans, and the country at large, and many of you have agreed,” Goodell wrote in his memo.

That doesn’t mean there won’t be a drastically different look at the draft — beginning with the lack of booing from draftniks when Goodell steps to the podium to announce picks. The league already announced the Raiders wouldn’t be hosting the event in Las Vegas and will instead be held in a studio.

Social distancing will be taken to the extreme as there will be no players or team reps joining Goodell in what will be a virtual draft of sorts. This despite some vocal opposition from the general managers subcommittee about proceeding with the draft. Because in-face interviews and workouts with draft prospects aren’t possible in times of a social-distance edict, GMs had to no avail suggested the league postpone the event.

Still, the Raiders may be one of the teams least harmed by having less access to players leading up to the draft. Even as a draft analyst, Raiders general manager Mike Mayock has always relied heavily on game film, trusting his eyes rather than perhaps getting tricked by measurables or a good pre-draft interview.

Earlier this week teams were instructed by Goodell to close their facilities until at least April 8, nonetheless he warned them each Thursday to start preparing alternate draft site plans.

“All clubs should now be doing the necessary planning to conduct draft operations in a location outside of your facility, with a limited number of people present, and with sufficient technology resources to allow you to communicate internally, with other clubs, and with draft headquarters,” Goodell said in his note.

Broncos Draft Board: Temple center Matt Hennessy will lean on experience if asked to start right away in NFL

As he cycled through three head coaches, offensive line coaches and strength coaches apiece during his four years at Temple, center Matt Hennessy figured the constant change would benefit him. “Being able to adapt to the different systems has been my biggest strength,” he said. “As soon as I’m introduced to something (in the NFL) […]

At least three times a day, Nuggets assistant coach Jordi Fernandez transports to Spain, where his parents, uncles, aunt, cousins, sister, grandma and friends all grapple with their new reality. The FaceTime calls provide a small reprieve for Fernandez, 37, who’s watched from afar as the coronavirus pandemic yanks at the threads of his country. […]