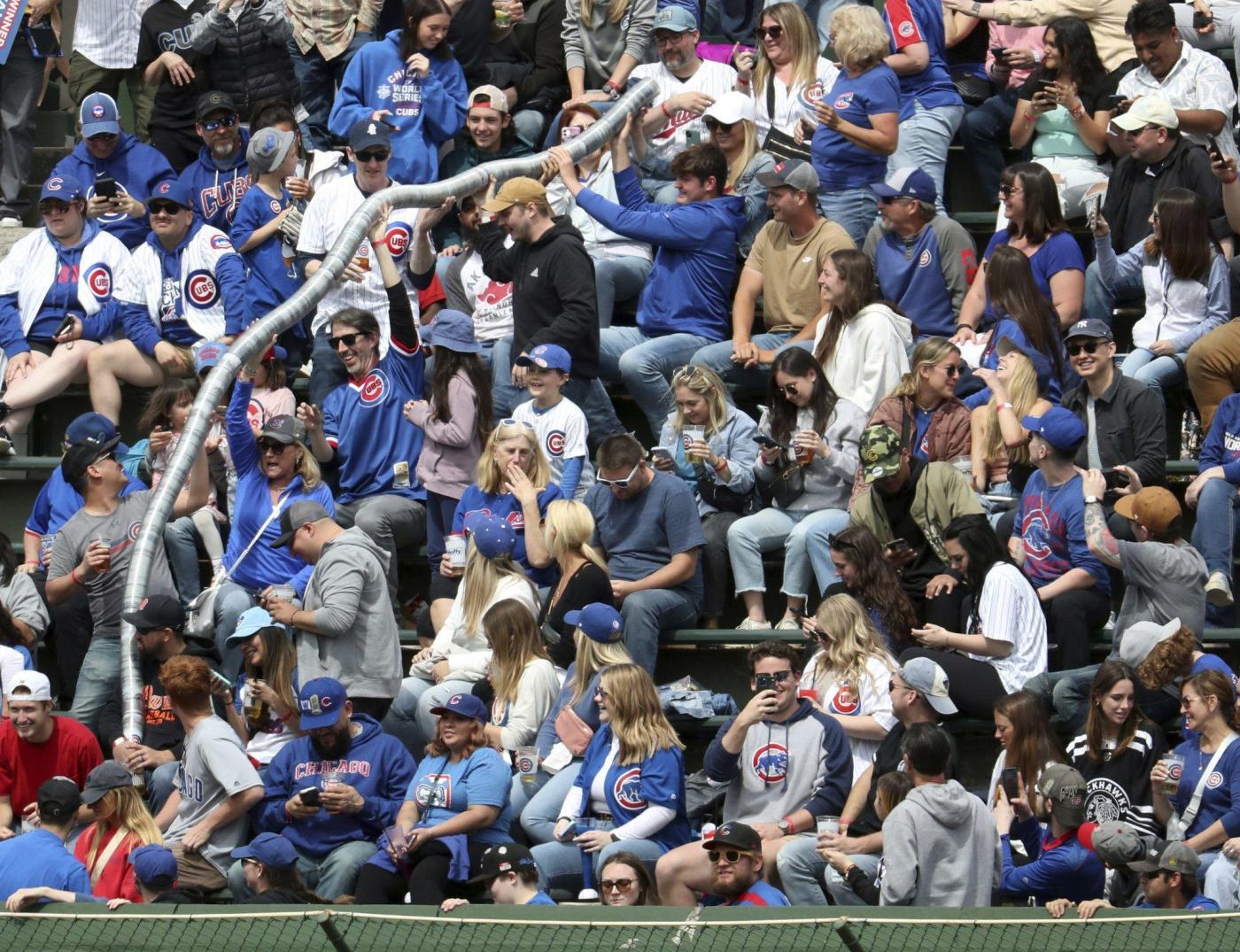 It was a beautiful afternoon for baseball Saturday, so I ventured out to the Wrigley Field bleachers to see how Chicago Cubs fans were coping with the rebuild that can’t be called a rebuild.

The bleachers were packed for the game against the Atlanta Braves as fans stood behind the last rows in left and right field and congregated behind the concessions to socialize without the obligation of watching the actual game.

In other words, business as usual at the corner of Waveland and Sheffield avenues.

Cubs owners throughout the years have counted on fans being oblivious to the failures of the team on the field, knowing that no matter how bad it gets there always will be young fans looking for a party atmosphere at Wrigley.

The bleachers have been a prime spot for tanning, beer drinking and people watching forever, which is why tickets are so expensive for seats so far away from the action. Even former Cubs President Theo Epstein made a trip out to the left-field section Friday afternoon to soak in the sun and have a few cold ones with friends.

After selling the White Sox in 1981 to a group led by Jerry Reinsdorf, Hall of Fame owner Bill Veeck spent his summer days sitting in the front row of upper center field at Wrigley, which he called the “best seats in the house.” In an interview from his perch in 1983, Veeck told me: “It’s one of those rare places where people of my generation can get along with young people.”

Back in the days when bleacher tickets went on sale only on the day of the game, regulars would line up early along Sheffield to ensure their favored spots. But the former owner, Tribune Co., did away with that long-standing policy in 1985 in a money grab that changed the bleacher vibe.

Veeck, who helped plant the ivy on the outfield walls in 1937, began his celebrated boycott of the bleachers because of that policy change.

Every generation of Bleacher Bums decries the younger generation encroaching their territory at least since I was a 20-something sitting in right field in the 1980s before heading to work on the Chicago Tribune city desk. Years later, after becoming the Cubs beat writer, I spoke with longtime Cubs fan and rock star Billy Corgan about the trendiness of celebrities attending games.

“The emphasis has to be on the people who support the team — day in, day out — and I always defer to that,” Corgan said in a 2004 interview. “I’m a common Cubs fan. I was a common Cubs fan long before I became famous. I’ll never forgive the yuppies for moving in back in ‘84. I’m still mad about that.

“When the Cubs stopped selling bleacher tickets the day of the game, that was the end of that old Bleacher Bums culture. Now it’s just fake Bleacher Bums.”

Carol Baily is a Colorado tennis legend who rose to No. 51 in the world rankings in 1980 before collecting 28 senior-age division national titles. However, back in 1969, Baily graduated from Colorado Rocky Mountain School in Carbondale having appeared in just one organized high school tennis match — as the only girl on the […]

Outfielder Anthony Santander and left-hander Keegan Akin were placed on the restricted list Monday and are not with the Orioles on their trip to Toronto to face the Blue Jays in a four-game series. Manager Brandon Hyde declined to address the restricted list situation Sunday while the team was still in Kansas City. Due to […]

Rockies’ Kris Bryant on track to return next weekend at Minnesota

The Rockies’ faltering offense could soon get a boost with the return of Kris Bryant to the lineup. Manager Bud Black said Friday that Bryant, whom Black called “our best offensive player,” could return from the injured list in time for next weekend’s series against the Twins at Minnesota. “Our hope is that we see […]