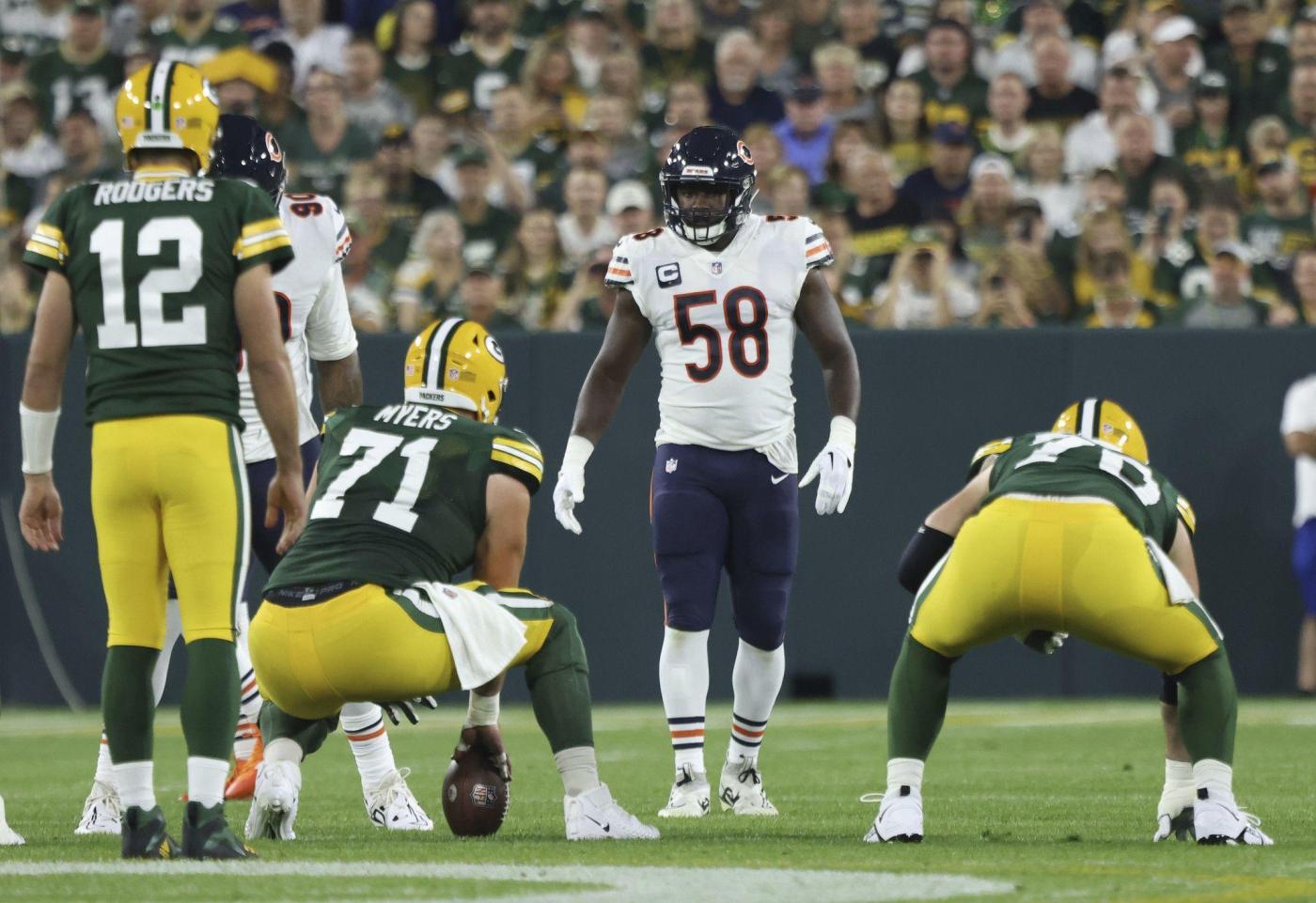 Chicago Bears linebacker Roquan Smith and cornerback Jaylon Johnson are listed as questionable to play in Sunday’s game against the Houston Texans as they deal with injuries.

Smith didn’t practice all week as he recovers from a hip injury suffered in the Week 2 loss to the Green Bay Packers. He was in uniform stretching with the team during the portion of Friday’s practice open to the media at Halas Hall, but the Bears listed him as “did not practice” based on not taking reps in team drills.

“We’re excited he’s there at that point through the course of the week, and we’ll have to see if he’s going to be up or down,” Eberflus said. “He’s working toward the game, and we’re hopeful that he’ll be there.”

The Bears already will be thin at linebacker because they will be without Matt Adams, who played 31% of the defensive snaps against the Packers but suffered a hamstring injury in practice this week.

The Bears could turn to undrafted rookie linebackers Jack Sanborn or Sterling Weatherford and have veteran Joe Thomas on their practice squad. Eberflus said he thinks Sanborn will be ready if he is needed on defense and added he had a good week of practice.

“I feel confident in myself from everything that I’ve gone through so far,” Sanborn said. “All training camp and in practice and things like that, that’s where your confidence has got to grow.”

Johnson injured his quad in practice Thursday and didn’t participate Friday. The Bears have some flexibility with how they could handle a replacement, as they’ve been moving rookie Kyler Gordon from outside cornerback in the base defense to nickel during games. Kindle Vildor plays outside in the nickel defense.

Rookie wide receiver/returner Velus Jones Jr. was limited in practice for a second straight day as he recovers from a hamstring injury but is listed as doubtful. Jones missed the first two games with the injury that has been nagging him since training camp.

Jones said he feels good physically but he’s trying to listen to his body as he goes through the recovery process.

Kiszla: Joker and Russ got way richer contracts. But MacK has best deal in Denver.

In the new golden age of Denver sports, Nathan MacKinnon, Russell Wilson and Nikola Jokic are leading the gold rush. We will remember 2022 as the year that the Big Three broke the bank. With MacKinnon signing a contract extension with the Avalanche that makes him the highest-paid player in the NHL, he joins Wilson […]

Ravens left tackle Ronnie Stanley has been ruled out of Sunday’s game against the New England Patriots, delaying his season debut at least another week. Stanley (ankle) was listed as doubtful on Friday’s injury report after practicing Wednesday and Thursday as a limited participant. He sat out Friday’s practice with what coach John Harbaugh called […]

As the clock ticks down on the Orioles season, there are fewer opportunities to bounce back from performances such as Wednesday night’s at Fenway Park. Against left-hander Rich Hill, Baltimore could mount little offensively, and the Boston Red Sox took advantage. Left-handed pitchers have been a kryptonite of sorts for the Orioles of late, and […]