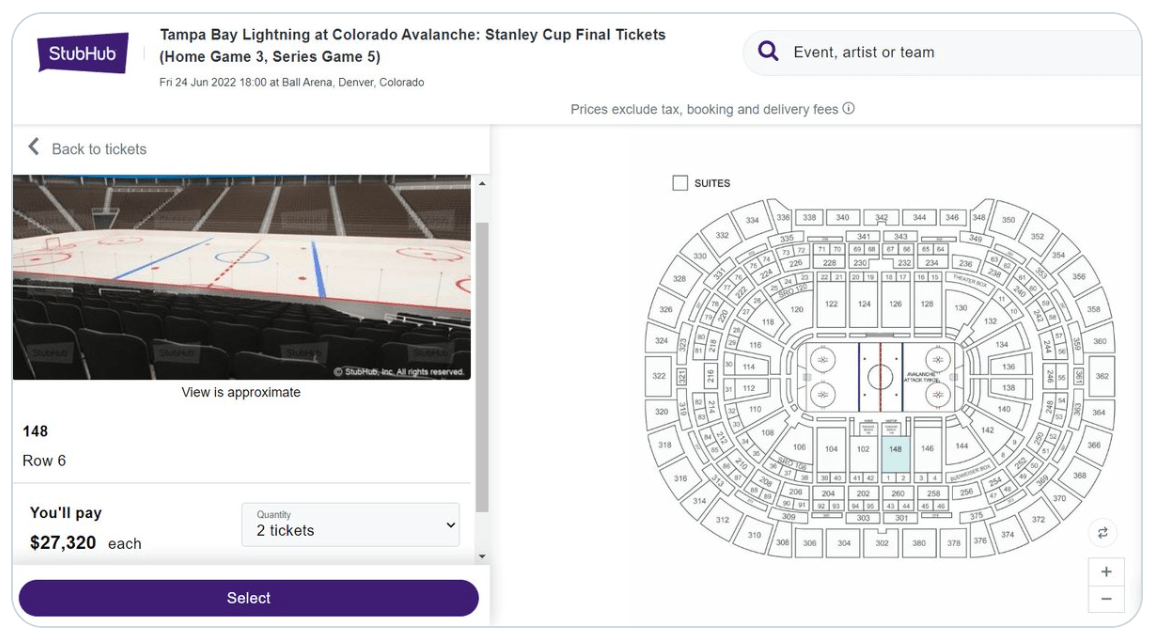 Avalanche fans seeking to witness history at Game 5 of the Stanley Cup Final can expect a hefty price tag.

The cheapest tickets available (not including service fees) are all in the four-figure range. The minimum price for entry into Ball Arena from major verified online resellers as of late Thursday:

“Stanley Cup Finals demand in Denver has considerably outpaced Tampa during this series, and fan excitement keeps rising with the Avalanche now just one win away from claiming the Stanley Cup,” said Michael Silveira, a StubHub spokesman, in a Thursday statement to The Denver Post. “Ticket sales for Game 5 have jumped 60% in the past 24 hours. There’s nothing like the energy in an arena when a team is home for a potential championship-clinching game, so we encourage fans to lock in the ticket if they see a seat they want, as sales are moving fast for this once-in-a-lifetime experience.”

The average Game 5 ticket price sold through StubHub is $1,629, according to a Thursday news release.

However, similarly to earlier rounds, the high-end ticket cost has skyrocketed for the Cup Final. The most expensive ticket is currently listed at $27,320 to sit on Row 6 of Section 148 (via StubHub).

The most expensive Avalanche-Lightning Game 5 ticket at Ball Arena that I can find on the secondary market right now is a stunning $27,320 (via StubHub) pic.twitter.com/qNCv7uZ4z1

Outfielder Kyle Stowers and catcher Anthony Bemboom are joining the Orioles in Toronto as part of the taxi squad, a source with direct knowledge of the organization’s plans told The Baltimore Sun. Right-handers Rico Garcia and Mike Baumann also joined Baltimore for the road trip. Stowers, a 24-year-old outfielder, is ranked as the No. 9 […]

There was a hint of a smile as Anthony Santander rounded first base, and it wouldn’t be the last one the Orioles would flash Sunday at Kauffman Stadium. The ball had leaped off Santander’s bat, flying an estimated 455 feet and ending with a splash into the fountain beyond the right-center fence. The emphatic crack […]