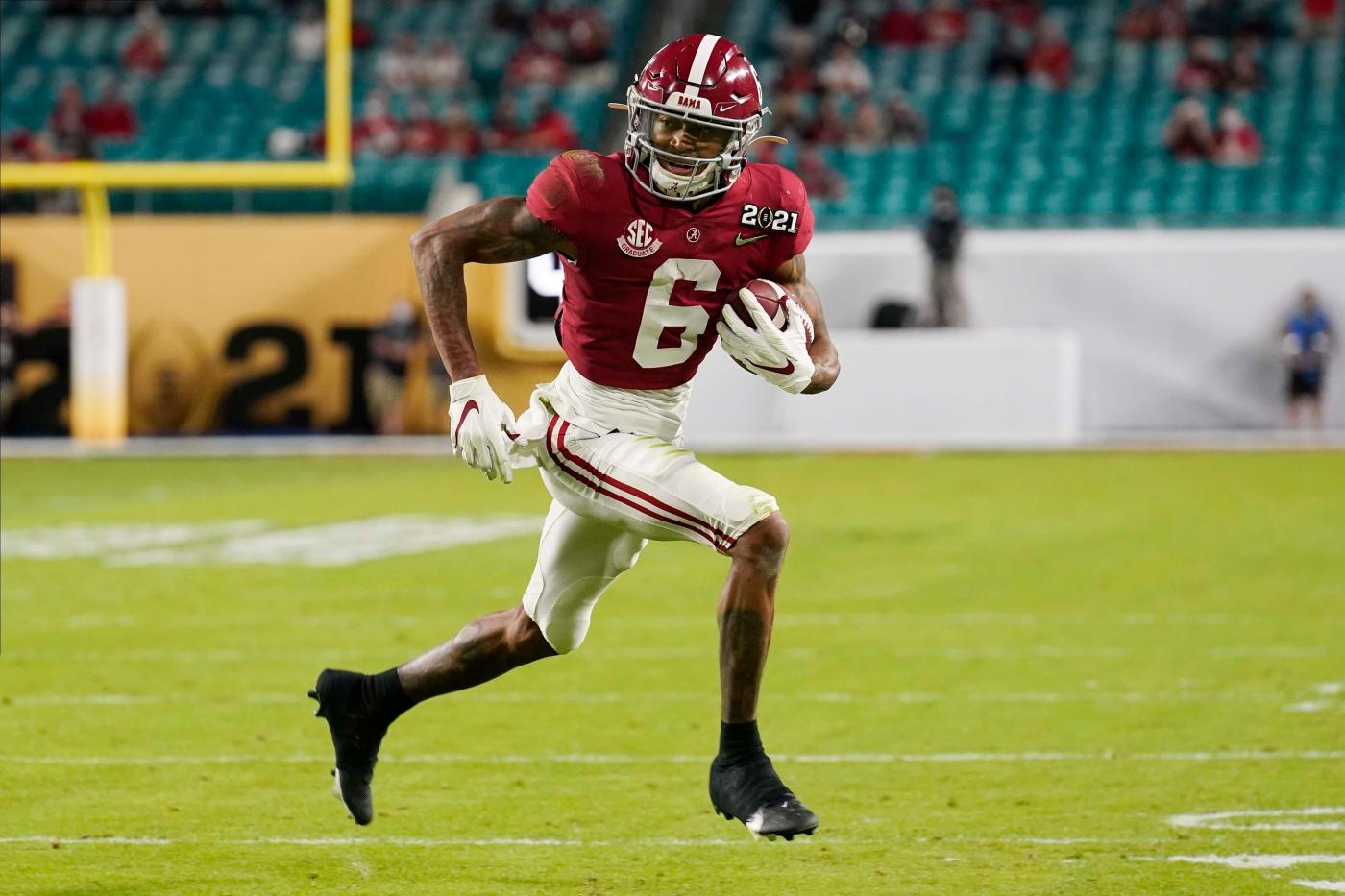 Heisman Trophy winner DeVonta Smith finished one of the most productive seasons by a college receiver as the Southeastern Conference’s all-time leader in yards and with his name prominent in the College Football Playoff record book.

Smith’s 12 catches for 215 yards and three touchdowns against Ohio State, all in the first half Monday night, increased his career totals to 235 receptions for 3,759 yards. He passed Vanderbilt’s Jordan Matthews (2010-13) as the SEC’s career leader in receiving yards.

Smith, who left in the third quarter with a right hand injury and didn’t return, ended the season with 117 catches for 1,856 yards and 23 touchdowns.

Smith set three CFP records. His 12 catches were most in the championship game since the playoff began in the 2014 season, his total of 345 yards receiving against Notre Dame and Ohio State were a two-game record, and his 215 yards Monday were a record for yards receiving in a half.

Smith’s average of 142.8 yards over 13 games ranked second behind Mississippi’s Elijah Moore, who opted out of the Rebels’ last regular-season game and bowl and finished with an eight-game average of 149.1 yards.

Patterson’s average of 178.7 yards per game was highest by a wide margin. His two-week total of 710 yards against Bowling Green and Kent State accounted for two-thirds of his 1,072 yards in six games.

Mac Jones of Alabama was first with 4,500 yards passing in 13 games with 41 touchdowns and four interceptions.

Trask led Florida to a nation-leading 378.6 yards passing per game.

KRANJSKA GORA, Slovenia — Marta Bassino stamped her authority on the giant slalom discipline on Saturday, winning her third World Cup race this season. Coping best with tough course conditions, the Italian held on to her first-run lead, holding off a challenge by Tessa Worley to win by a big margin. Worley, the former two-time […]

Joe Bowden The Colorado Buffaloes may have found a new linebackers coach. On Wednesday, ESPN’s Adam Rittenberg reported that CU is “expected” to add former NFL player and coach Joe Bowden as inside linebackers coach. Bowden played in the NFL from 1992-2000 and later coached with the St. Louis Rams (2012-15) and San Francisco 49ers […]

Introducing himself to scouts he may only know in passing. Visiting with coach Vic Fangio and his staff. Getting updates from the medical staff about rehabilitating players. And creating passwords for his team-issued computers. New Broncos general manager George Paton was expected back in the Denver area this weekend to attack a lengthy to-do list […]