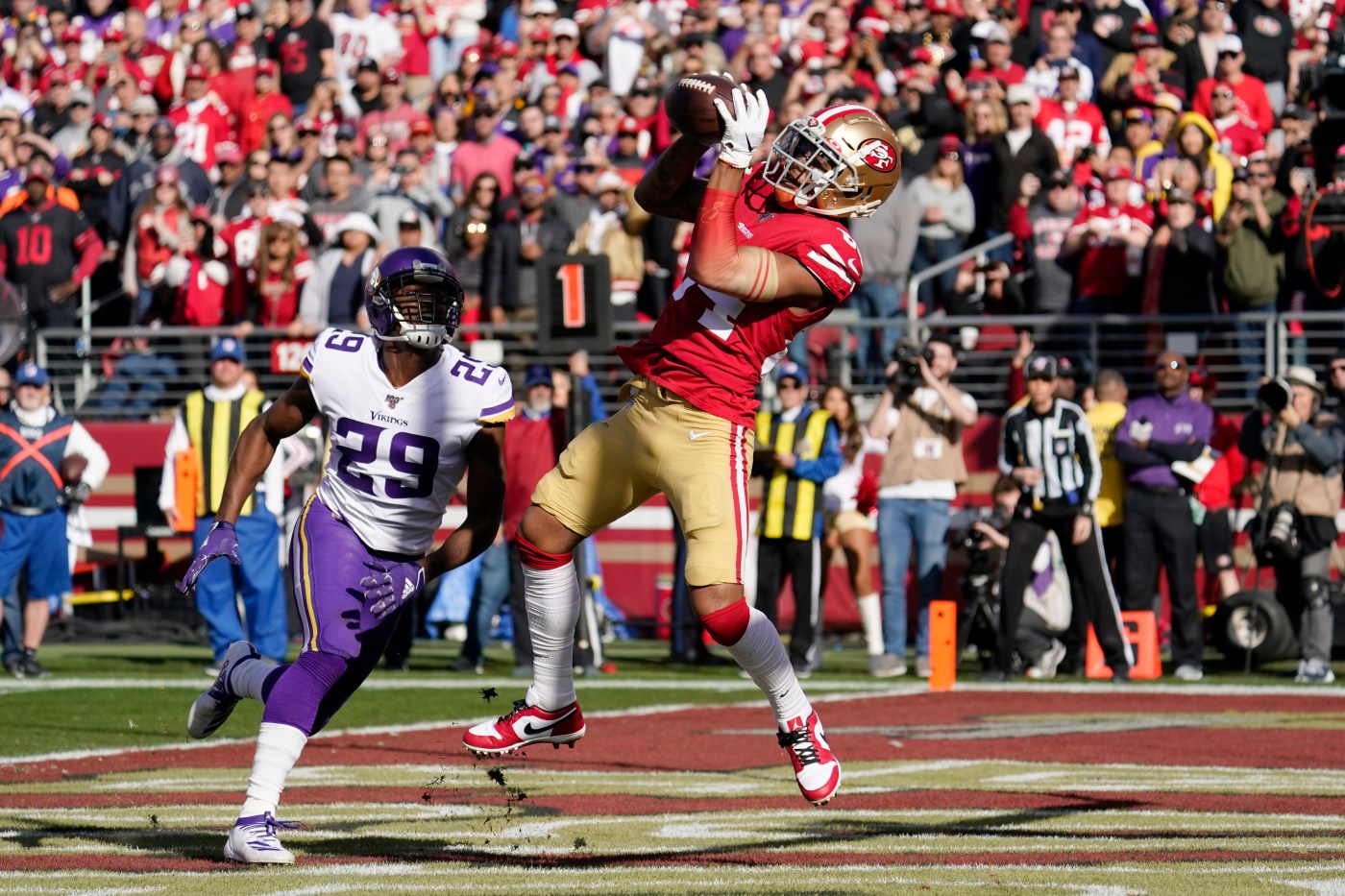 SANTA CLARA, Calif. — Richard Sherman anticipated the route for an interception and then watched the San Francisco 49ers run eight straight times for the touchdown that put them in control of their first playoff game in six years.

The dominant defense and powerful running game that carried the Niners to an 8-0 start this season delivered a 27-10 victory over the Minnesota Vikings in the divisional round Saturday.

“People keep disrespecting us. At the end of the day, all you can do is go out and execute,” Sherman said. “It felt good. That’s what we look like when we’re totally healthy.”

The return of injured defensive starters Dee Ford, Kwon Alexander and Jaquiski Tartt had the Niners (14-3) playing as they did in the first half of the season as they set a franchise playoff record by allowing only 147 yards.

Jimmy Garoppolo threw a TD pass on his opening drive as a playoff starter and then mostly watched his defense and running game take over from there. The top-seeded 49ers turned a pair of second-half turnovers by Minnesota (11-7) into 10 points.

“They’re pretty good right?” tight end George Kittle said of his defense. “It’s such a blast just to watch them, how they work together. …

“If our defense keeps playing like that, all we have to do is not turn the ball over to win games”

Sherman set up Tevin Coleman‘s second short touchdown run of the game when he beat Adam Thielen to the spot to intercept Kirk Cousins for his third career playoff interception.

Coleman had five of the eight carries on the 44-yard drive as part of a 105-yard rushing performance.

“Those guys did very well,” Coleman said of his offensive line. “They moved the guys back so I had clear holes to run through. So, yeah, they did a real good job.”

Marcus Sherels’ fumbled punt later in the third quarter led to a field goal that made it 27-10 early in the fourth quarter.

San Francisco didn’t allow Minnesota to gain a first down for more than 27 minutes of game action starting late in the second quarter.

The Niners will host the NFC championship game next week against the winner of Sunday’s game between Seattle and Green Bay.

Garoppolo threw an interception deep in his own territory late in the first half and then spent most of the second half handing the ball off to Coleman and Raheem Mostert.

There was little reason for coach Kyle Shanahan to take chances the way his defense completely bottled up talented runner Dalvin Cook. That took away Minnesota’s play-action game and forced Cousins into becoming a drop-back passer.

“We didn’t do enough offensively to give ourselves a chance to win the game,” Cousins said. “It hurts right now. It’s so raw right now, just falling short.”

Cousins finished 21 for 29 for 172 yards with his only big play coming on a 41-yard TD pass to Stefon Diggs in the first quarter.

Cook was held to 18 yards on nine carries …read more

MEMPHIS — The Warriors will convert guard Damion Lee’s two-way contract to a standard NBA deal within the next few days, coach Steve Kerr said. Lee, who is out for Sunday’s game in Memphis, used his final day with Golden State allotted under his two-way contract in Friday’s loss to the Clippers in Los Angeles. […]

The first major pieces of the Steve Addazio offense at Colorado State fell into place Tuesday, as the Rams announced the additions of Joey Lynch as offensive coordinator and Brian White as senior associate head coach. Lynch joins the CSU staff from Ball State, where his Cardinals featured one of the most prolific offenses in […]

STANFORD — Once Kiana Williams and Stanford found a rhythm after halftime and began taking better care of the ball, Washington could no longer keep up. Yet the scrappy Huskies stuck right in there for long enough against a top team to show they will be a tough opponent in the Pac-12 Conference. Williams keyed […]