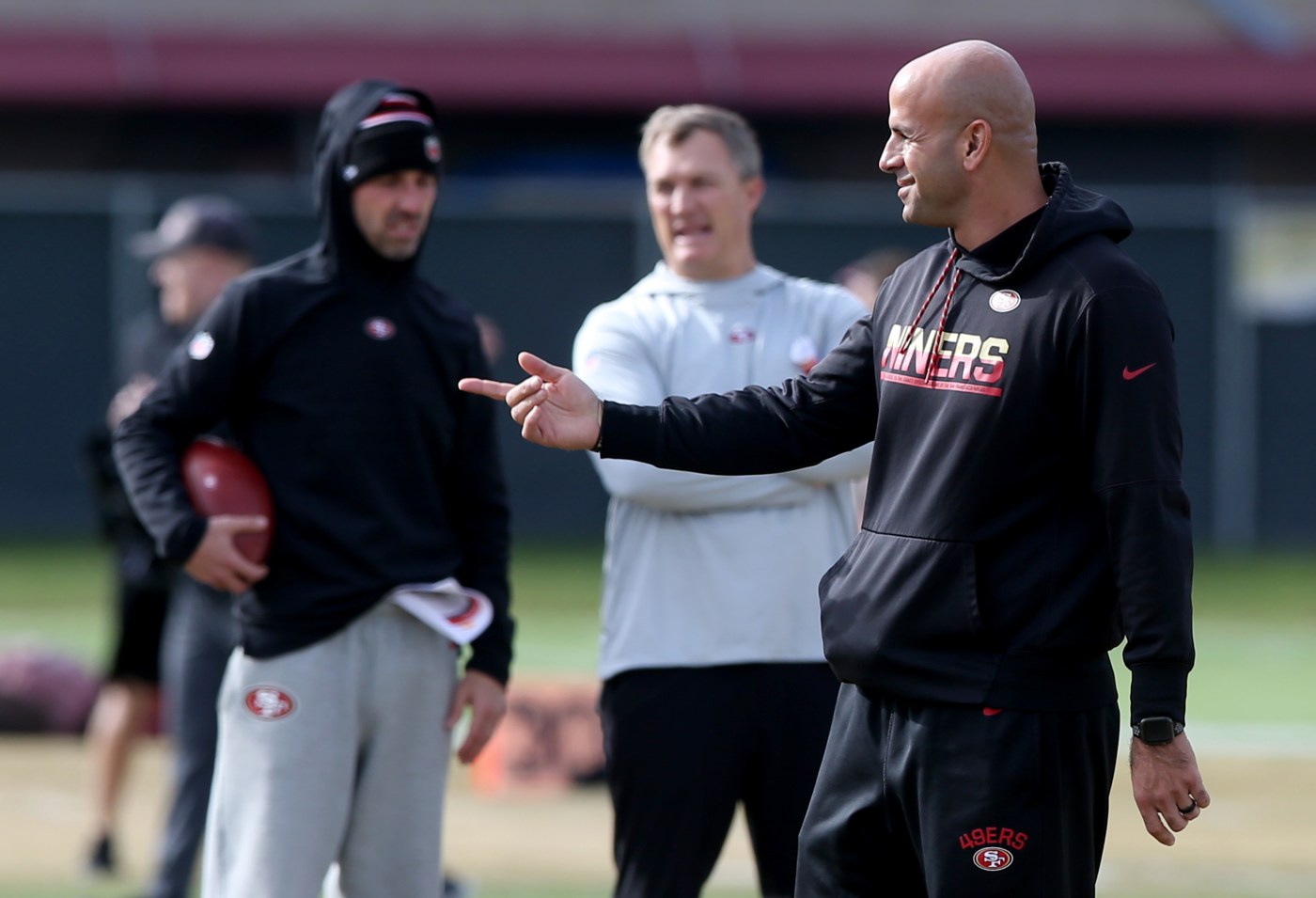 SANTA CLARA — Parking lots opened early, rain opted to stay away and the coast looked clear for several starters to return from injuries and play in the 49ers’ first playoff game at Levi’s Stadium.

Here is the latest news filtering in ahead of the 1:35 p.m. kickoff against the Minnesota Vikings in a divisional-round game:

The Browns also need to hire a general manager and among those Saleh would be interested in pairing with are 49ers vice president of player personnel Adam Peters, the Seattle Seahawks’ Trent Kirchner and Scott Fitterer, and the Indianapolis Colts’ Ed Dodds.

#Browns also need to hire a GM, and among those Robert Saleh would be interested (per @RapSheet) in pairing with are #49ers VP Adam Peters, the Seahawks’ Trent Kirchner and Scott Fitterer, and Colts’ Ed Dodds.

Here is Saleh and Peters heading out to Jan. 2 practice together: pic.twitter.com/L0jcT31B6C

— Much of the talk this week centered on the expected returns of defensive starters Kwon Alexander, Jaquiski Tartt and possibly Dee Ford. Well, let’s not forget about the offense. Right guard Mike Person is expected to return from a two-game hiatus and start, NBC Sports Bay Area’s Matt Maiocco first reported.

Person has dealt with a neck injury dating back to at least November and is not expected to regain full health until he rests in the offseason. Daniel Brunskill started in his place the previous two games.

— Ford’s pregame warmups will draw intense focus to see if he’s capable of returning from a hamstring injury tracing to Nov. 17 against Arizona. He missed the past six games aside from a four-snap cameo at New Orleans, where he aggravated the hamstring after experiencing tightness in warmups. If he’s tight again today, the 49ers may shelve him for a potential NFC Championship Game appearance next Sunday.

— Vikings wide receiver Adam Thielen is expected to start despite requiring stitches for a gash on his ankle. More details of his injury emerged earlier today.

— The 49ers’ first bus from their nearby team hotel rolled in at 9:30 a.m., and Jimmy Garoppolo wasn’t on it, because he already had arrived through the players’ parking lot.

#49ers first bus has arrived and among those off it is Levine Toilolo, 1 of only 14 players with #NFLPlayoffs experience.
(Jimmy Garoppolo arrived earlier for his first postseason start) pic.twitter.com/mkylzG198U

SAN FRANCISCO — Point guard D’Angelo Russell (right shoulder contusion) and forward Draymond Green (ankle) are considered questionable for the Warriors’ game Monday night against the Sacramento Kings at Golden 1 Center. Center Kevon Looney, who has missed the last six games with a left abdominal strain, is out. Though he did not practice Sunday […]

Way-too-early top-25 for next season: Alabama’s No. 1, beware Penn State, no contenders from the Pac-12

Back for another swing … The Hotline began producing the ridiculously early top-25 before many websites currently doing the same were even websites. Our first year, if memory serves, was 2007. Alas, we have yet to get all 25 projections correct. Note I: Teams slotted for the top third are expected to finish with zero, […]

Avalanche gameday: Philipp Grubauer back in net against Sharks at Pepsi Center

Avalanche goalie Philipp Grubauer will be back in net Thursday against the San Jose Sharks at the Pepsi Center. Grubauer has gone 2-5-2 in his last nine starts and has a 2.92 goals-against average and .909 save percentage on the season. He has appeared in 27 games, including Tuesday when Colorado blew another third-period lead […]