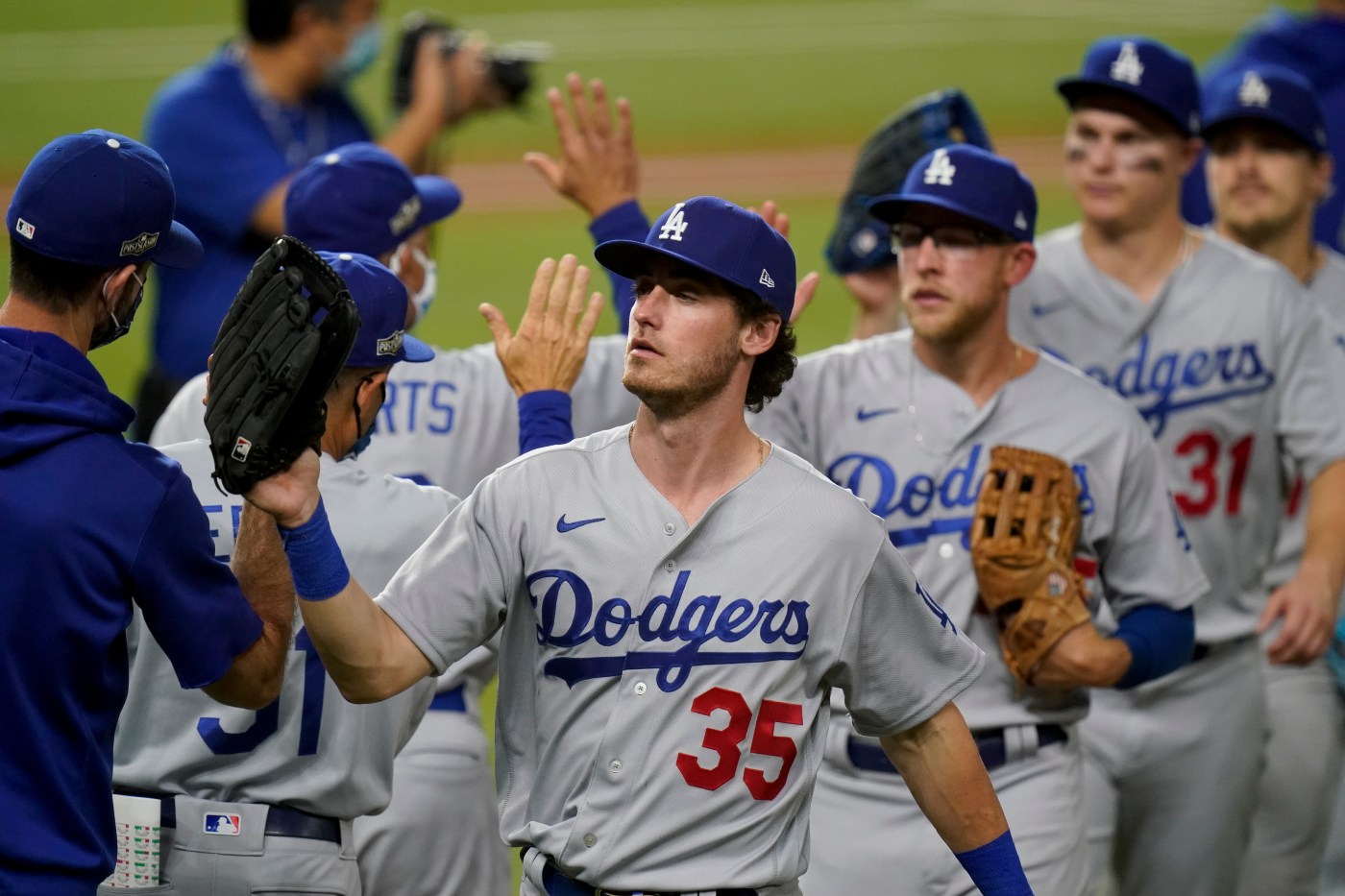 ARLINGTON, Texas — Max Muncy’s grand slam capped a record-setting 11-run first inning for the Los Angeles Dodgers, who coasted to a 15-3 rout of the Atlanta Braves on Wednesday night that cut their National League Championship Series deficit to 2 games to 1.

The slam by Muncy off Grant Dayton was the third homer in the first, the highest-scoring inning in a major league postseason game. It was among a franchise-record five homers for the Dodgers, who set a team record for postseason runs.

“It’s pretty cool. Not too many things that are cooler than that,” said Muncy, a Texas native. “But the biggest thing to me is our team got a W and got us back on track.”

Joc Pederson hit a three-run homer off starter Kyle Wright to start his four-hit night, and Edwin Rios went deep on next pitch. Corey Seager had a pair of RBI hits in the opening outburst, then added a solo homer in the third as the Dodgers built a 15-0 lead — the first team with that many runs in the first three innings of a postseason game.

Winner Julio Urías, made his first postseason start and improved to 3-0 in these playoffs, strikng out five while allowing one run and three hits over five innings. He walked the first two batters but no more.

Atlanta’s miserable start was eerily similar to the Braves’ flop in Game 5 of last year’s Division Series against St. Louis, when they gave up a 10-run first inning at home in a season-ending start by Mike Foltynewicz.

Three-time NL Cy Young Award winner Clayton Kershaw likely will start Game 4 for the Dodgers, two nights after he was scratched because of back spasms. Bryse Wilson makes his postseason debut as the third rookie right-handed starter for Atlanta in this series in what will be his first appearance since the final day of the regular season on Sept. 27.

“We still are in a good spot with four games left,” Braves manager Brian Snitker said. “Like I say, for the whole team, you just turn the page and get ready to go tomorrow.”

The Dodgers had left the tying run at third base after a four-run bottom of the ninth during an 8-7 loss on Tuesday night. They were the visiting team in Game 3 and sent 14 batters to the plate for seven hits, three walks and a hit batter over 32 minutes in the the 29,786th half-inning in postseason history.

“That was fun to be a part of,” Pederson said. “I think some of the momentum from last night, the last inning definitely carried over and got us feeling a little bit more comfortable at the plate.”

Those 15 runs over two at-bats came after the Braves had allowed only nine runs in their previous six games plus eight innings, a stretch that included four shutouts over en route to a 7-0 postseason start.

Reigning NL MVP Cody Bellinger walked and scored in the first, led off the second with a homer and added an RBI single in the third. His …read more

Why Colorado high school seniors are grateful, after almost punting on fall football because of coronavirus, to be playing in October

You never forget where you were. Ever. You don’t forget the moment life opened the door and the thing you loved most walked back in from the cold. Jack Baumbach was in ceramics class. Kid happened to be palms deep in the muck when his phone wiggled. Basketball group chat. Best text ever. Bwoop! WELL, WE’RE […]

The Avalanche on Wednesday selected Canadian center Jean-Luc Foudy in the third round of the NHL draft. Colorado, which chose defenseman Justin Barron in Tuesday’s first round (25th overall), did not have a second-round pick. Related Articles Avalanche selects defenseman Justin Barron in first round of NHL draft NHL targeting Jan. 1 to begin next […]

FOXBORO — Like all previous opponents, Cam Newton and Stephon Gilmore are putting COVID-19 behind them. Neither Patriots star wanted to address their recent bouts with the coronavirus following the team’s 18-12 loss Sunday to the Broncos. Newton became the first Patriot to test positive for COVID-19 back on Oct. 2. His test was ultimately […]