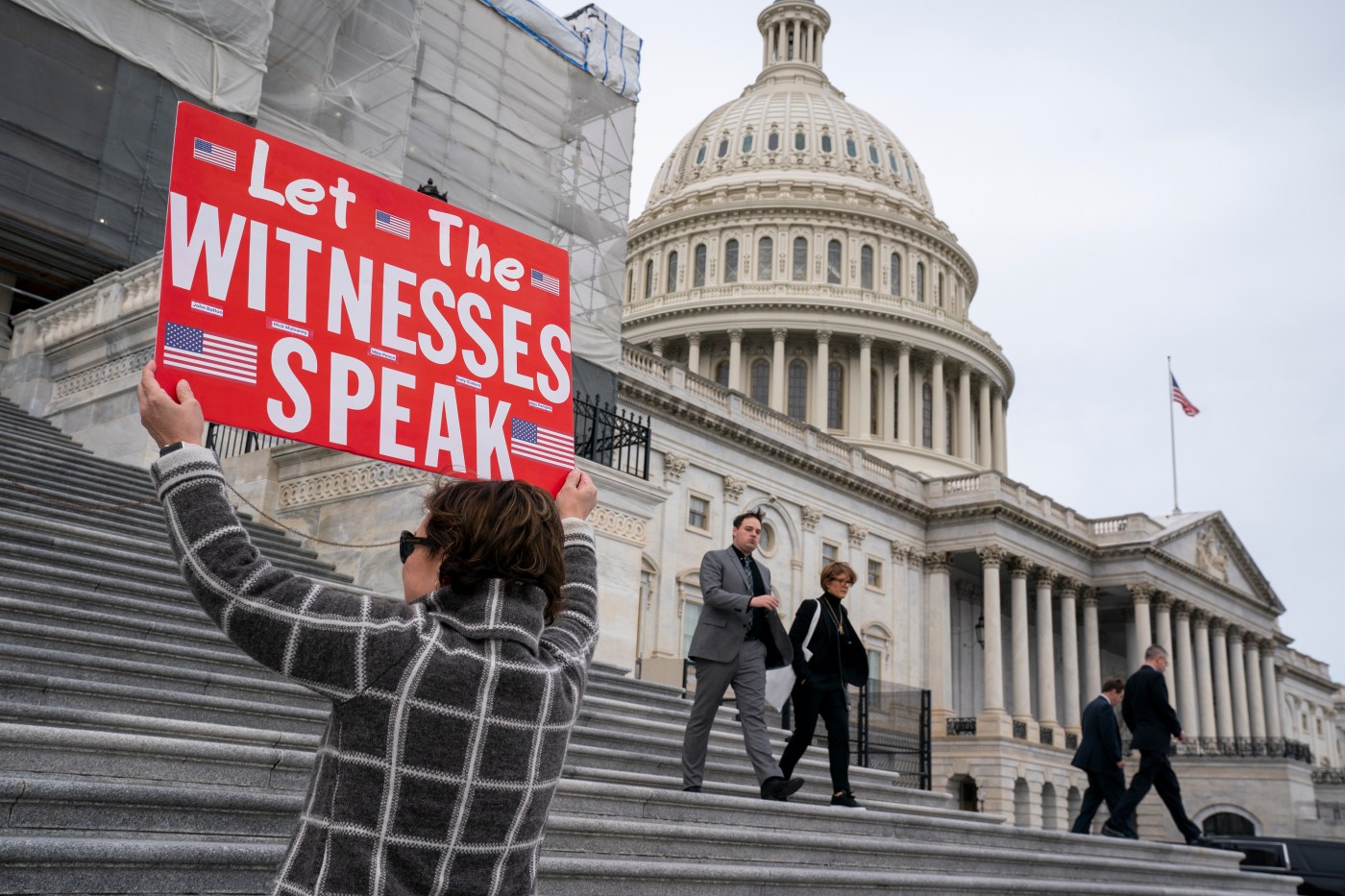 WASHINGTON — House Speaker Nancy Pelosi said Sunday that senators will “pay a price” if they block new witnesses in Donald Trump’s impeachment trial, but the president quickly retorted that she and House Intelligence Chairman Adam Schiff should also testify.

The House plans to vote this week to transmit the articles of impeachment to the Senate for the historic trial on charges of abuse of power and obstruction of Congress over Trump’s actions toward Ukraine. It will be only the third impeachment trial in American history.

“It’s about a fair trial,” Pelosi told ABC’s “‘This Week.” “We’ve done our job. We have defended the Constitution of the United States. We would hope the Senate would do that as well.”

She warned: “Now the ball is in their court to either do that or pay a price.”

Trump tweeted right before and after Pelosi’s appearance, in both instances using derisive nicknames. He said both she and Schiff should appear in the Senate for testimony.

“He must be a Witness, and so should she!” Trump tweeted.

Why did Nervous Nancy allow corrupt politician Shifty Schiff to lie before Congress? He must be a Witness, and so should she!

The president also rebutted Pelosi’s suggestion that no matter what the Senate does, the House vote last month means Trump will be “impeached forever” and “for life.”

“Why should I have the stigma of Impeachment attached to my name when I did NOTHING wrong?” Trump tweeted, calling the House action a “totally partisan Hoax.’”

Why should I have the stigma of Impeachment attached to my name when I did NOTHING wrong? Read the Transcripts! A totally partisan Hoax, never happened before. House Republicans voted 195-0, with three Dems voting with the Republicans. Very unfair to tens of millions of voters!

It is unlikely that the Republican-controlled Senate would call either Democrat to testify in the president’s impeachment trial, which could start as soon as this week. The Democratic-run House is set to vote this week to send the articles of impeachment after Pelosi ended a more than three-week delay.

McConnell has proposed a process similar to the last presidential impeachment trial of Bill Clinton in 1999 that would start the proceedings and then vote later on hearing new testimony.

One leading Republican, Sen. Lindsey Graham of South Carolina, has already predicted that the trial would end “in a matter of days.”

In a Fox News Channel interview on Saturday, Graham dismissed Pelosi’s tactics, saying the delay would have no effect on calling new witnesses or the expected outcome — acquittal by the GOP-controlled Senate.

“The Senate should not reward this behavior by the House,” said Graham, chairman of the Senate Judiciary Committee. “The Senate should end this trial as quickly as possible. That’s what I intend to do. He will be acquitted. I hope …read more

Protests grow in Iran over downing of passenger jet

By Jon Gambrell | Associated Press DUBAI, United Arab Emirates — Popular anger swelled Monday in Iran over the accidental shootdown of a Ukrainian jetliner and the government’s attempt to conceal its role in the tragedy, as online videos appeared to show security forces firing live ammunition and tear gas to disperse protests in the […]

CLICK HERE if you are having a problem viewing the photos or videos on a mobile device House Speaker Nancy Pelosi sent a letter to Democratic members of Congress announcing that the House of Representatives will introduce and vote on a “War Powers Resolution to limit the President’s military actions regarding Iran” amid rising tension, […]

Letter: Gun rights claim like saying free speech right is limited to this

Is free speech a right only if petitioning government? A letter was published titled “Enact gun control without repealing the Second Amendment” (Mercurynews.com, Jan. 5) implying that the right of the people to keep and bear arms was subject to being within a “well-regulated militia.” Good thing this letter-writer isn’t a lawyer. If that were […]