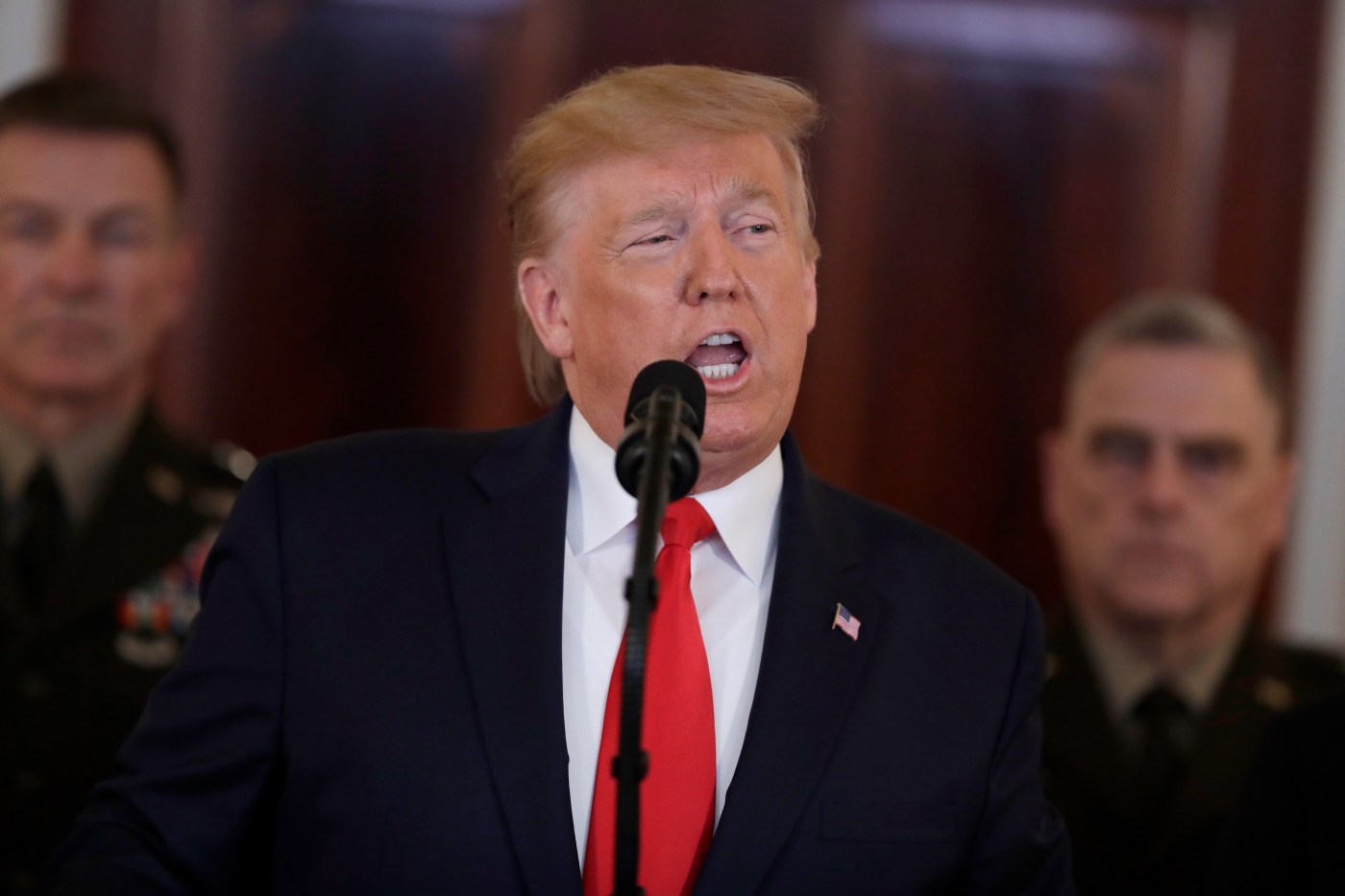 A transcript of President Donald Trump’s remarks Wednesday on Iran, as released by the White House:

As long as I am president of the United States, Iran will never be allowed to have a nuclear weapon.

I’m pleased to inform you: The American people should be extremely grateful and happy no Americans were harmed in last night’s attack by the Iranian regime. We suffered no casualties, all of our soldiers are safe, and only minimal damage was sustained at our military bases.

Our great American forces are prepared for anything. Iran appears to be standing down, which is a good thing for all parties concerned and a very good thing for the world.

No American or Iraqi lives were lost because of the precautions taken, the dispersal of forces, and an early warning system that worked very well. I salute the incredible skill and courage of America’s men and women in uniform.

For far too long — all the way back to 1979, to be exact — nations have tolerated Iran’s destructive and destabilizing behavior in the Middle East and beyond. Those days are over. Iran has been the leading sponsor of terrorism, and their pursuit of nuclear weapons threatens the civilized world. We will never let that happen.

Last week, we took decisive action to stop a ruthless terrorist from threatening American lives. At my direction, the United States military eliminated the world’s top terrorist, Qassem Soleimani. As the head of the Quds Force, Soleimani was personally responsible for some of the absolutely worst atrocities.

He trained terrorist armies, including Hezbollah, launching terrorist strikes against civilian targets. He fueled bloody civil wars all across the region. He viciously wounded and murdered thousands of U.S. troops, including the planting of roadside bombs that maim and dismember their victims.

Soleimani directed the recent attacks on U.S. personnel in Iraq that badly wounded four service members and killed one American, and he orchestrated the violent assault on the U.S. Embassy in Baghdad. In recent days, he was planning new attacks on American targets, but we stopped him.

Soleimani’s hands were drenched in both American and Iranian blood. He should have been terminated long ago. By removing Soleimani, we have sent a powerful message to terrorists: If you value your own life, you will not threaten the lives of our people.

As we continue to evaluate options in response to Iranian aggression, the United States will immediately impose additional punishing economic sanctions on the Iranian regime. These powerful sanctions will remain until Iran changes its behavior. In recent months alone, Iran has seized ships in international waters, fired an unprovoked strike on Saudi Arabia, and shot down two U.S. drones.

Iran’s hostilities substantially increased after the foolish Iran nuclear deal was signed in 2013, and they were given $150 billion, not to mention $1.8 billion in cash. Instead of saying “thank you” to the United States, they chanted “death to America.” In fact, they chanted …read more

By Jennifer McEntee | Reuters SAN DIEGO – U.S. Representative Duncan Hunter, a leading California Republican who pleaded guilty last month to a federal corruption charge of conspiracy to misuse campaign funds, announced on Tuesday that he would resign from office effective Jan. 13. Hunter, 43, whose conviction set off a scramble within the Republican […]

By Andrew Kaczynski | CNN In media appearances prior to the 2012 election, Donald Trump repeatedly predicted that then-President Barack Obama would start a war with Iran in order to win re-election. A CNN KFile review found Trump made the claims throughout 2011 and 2012 in radio and television appearances as well as in a […]

We have overpaid leaders of the climate status quo Re: “30-year goals are not enough to fight climate change” (Letter to the editor, Eastbaytimes.com, Dec. 15): We don’t have the leadership to tackle climate change. All these discussions are useless. Science and now the United Nations are begging for our elected leaders to do something, […]