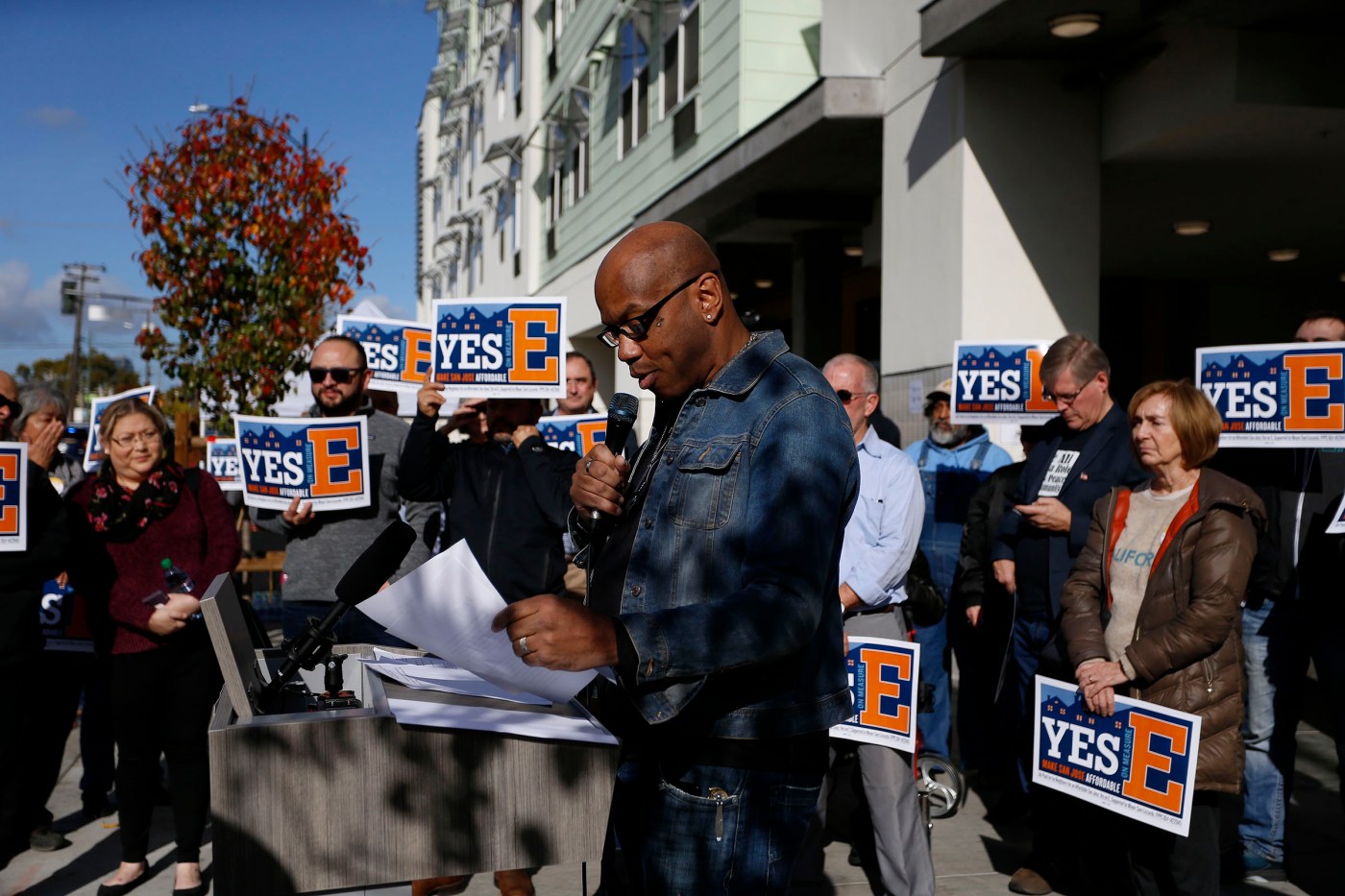 SAN JOSE — Supporters of a proposed new tax that could raise tens of millions of dollars to fund affordable housing projects in San Jose launched their campaign Saturday morning outside the kind of development they want to become a lot more common.

For Raymond Ramsey, his apartment in the 134-unit complex Second Street Studios is his foundation. Instead of spending all of his time in “survival mode,” worrying about where he might sleep or how to protect his belongings, Ramsey, who cycled in and out of homelessness for 10 years before moving into the affordable housing development last May, said he can focus on advocating for the thousands of people who are still living on the streets in San Jose.

“We are living proof that the homeless population is neither helpless nor hopeless, and that permanent supportive housing is the key,” Ramsey told a crowd of city officials, affordable housing advocates and other formerly homeless people at the campaign kickoff rally in front of the building he calls home.

“We want more affordable housing like this,” he said.

The strategy that Mayor Sam Liccardo and other supporters say will make that a reality is a new tax on real estate sales worth $2 million or more, which will appear on the ballot as Measure E in the March primary.

But opponents of the measure, and even some of its supporters, have raised the concern that the money the tax would generate might not wind up funding the affordable housing causes its backers are championing in their campaign.

That’s because the tax revenue would flow into the city’s general fund — a distinction that allows the tax to pass with a simple majority, rather than a larger share of votes. But that means supporters cannot legally require that the money fund affordable housing projects or any other specific cause.

“It’s a general fund tax, and other city councils could decide what to do with this money in any given year that it is there,” Councilman Johnny Khamis said.

Opponents also charge that the tax risks making the city’s housing crisis even worse, because it will increase the cost of acquiring and developing new properties.

“Developers will have to make up the cost of this tax somehow,” Khamis said.

Letter: This would allow seniors and grandchildren to stay in San Jose

Measure E allows seniors and grandchildren to stay I’ve lived in San Jose my entire life. I’ve seen the city change from the Valley of Heart’s Delight into the capital of Silicon Valley. What hasn’t changed is the strong sense of community and the idea that if you work hard and play by the rules, […]

Hailed for Bin Laden killing, Obama still didn’t win war When former President Barack Obama ordered the killing of Osama Bin Laden, he was showered with praise from both parties in Congress, and was given his ticket to the Oval Office for four more years. But when Donald Trump orders the killing of an Iranian […]

Moms 4 Housing spotlight firms fueling housing crisis Re: “Taxpayers will leave if Oakland takes over house” (Eastbaytimes.com, Letter to the editor, Jan. 7): I am an Oakland homeowner and taxpayer. I am thrilled by the Moms 4 Housing activists, as they organize to bring attention to the corporate real estate speculators who are twisting […]