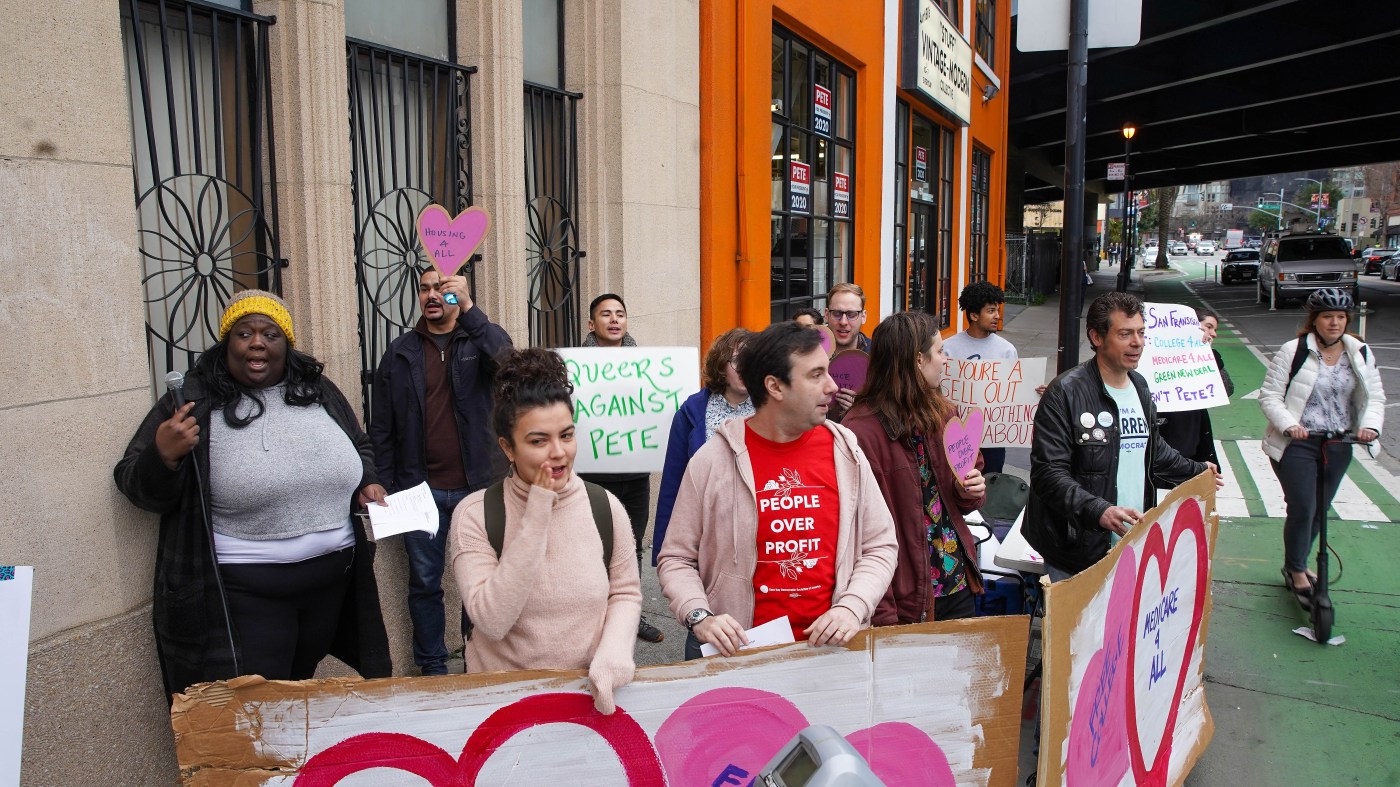 CLICK HERE if you’re having trouble viewing this photo gallery on a mobile device.

Protesters with Queers Against Pete chanted, read speeches and served coffee Friday morning in San Francisco outside an unofficial campaign event for Pete Buttigieg — one of several for the Democratic presidential candidate while he is in Northern California as part of a fundraising visit.

Tracey Corder, the event organizer, rounded up a little more than a dozen activists two blocks away from the former South Bend, Indiana, mayor’s campaign stop at Four Barrel Coffee before leading the group to a makeshift java stand outside the National LGBTQ Center for the Arts. Corder emphasized politeness as the protesters rallied out front.

Protesters arrive at a @PeteButtigieg event in San Francisco pic.twitter.com/YQFCzLQe64

She did eventually speak one-on-one with a volunteer from Buttigieg’s campaign, who said little more than “we’re with you,” while refuting some of the activists’ claims and declining to be named.

“Hey, Pete, stop it! Put people over profit,” the group chanted as Buttigieg supporters filed into the event, which is one of several he coordinated in Northern California in his bid to be the party’s 2020 presidential nominee. Tickets for the fundraisers are sold out, but ranged as high as $2,800 for the chance to “meet and greet” Buttigieg and host one of his fundraisers, according to his campaign site. Supporters could opt to pay $1,500 for preferred seating at such events, which include a lunch in Palo Alto and a town hall in Sacramento.

The admission prices for Buttigieg’s events across Northern California proved to be one of several points of contention the protesters rallied over in the first place. Corder told this news organization that if Buttigieg was going to visit San Francisco, the Queers Against Pete would prefer he met with residents.

“We’re in the middle of a housing crisis in the Bay. People can’t afford a $1,000 ticket to come hear him speak, and their rent,” Corder said, adding that no one from Buttigieg’s campaign reached out to Corder or “any of the community groups on the ground who do the work to outreach to people.”

Before the event was over, Corder and one other protesters confirmed that members of the Queers Against Pete had been invited inside to speak with Buttigieg.

Jethro Patalinghug, a gay filmmaker and San Francisco resident who attended the protest, accused Buttigieg of “using his gay card to propel his campaign.”

Major new oceanfront campground to be built along Monterey Bay

Trump’s State of the Union was surprisingly conventional

Capitol Hill hadn’t seen this potential for an explosive confrontation by a president in 21 years. Not since former President Bill Clinton addressed a joint session of Congress in 1999 had a president delivered a State of the Union speech during a Senate impeachment trial. Clinton chose at that time to avoid the topic completely, […]

Deval Patrick drops out of Democratic race for president

By Dan Merica and Eric Bradner | CNN Deval Patrick, the former Massachusetts governor who in November made a late entrance into the Democratic 2020 race, ended his campaign Wednesday, according to a statement provided to CNN. “I believed and still believe we had a strong case to make for being able to deliver better […]

Kepner fiscally responsible, pragmatic–and she listens I encourage my Santa Clara Valley neighbors to choose Anne Kepner as our representative to the California Assembly. I have witnessed Anne’s commitment to public service through her extensive volunteer efforts on behalf of students in the Santa Clara Unified School District and her tenure on the West Valley-Mission […]