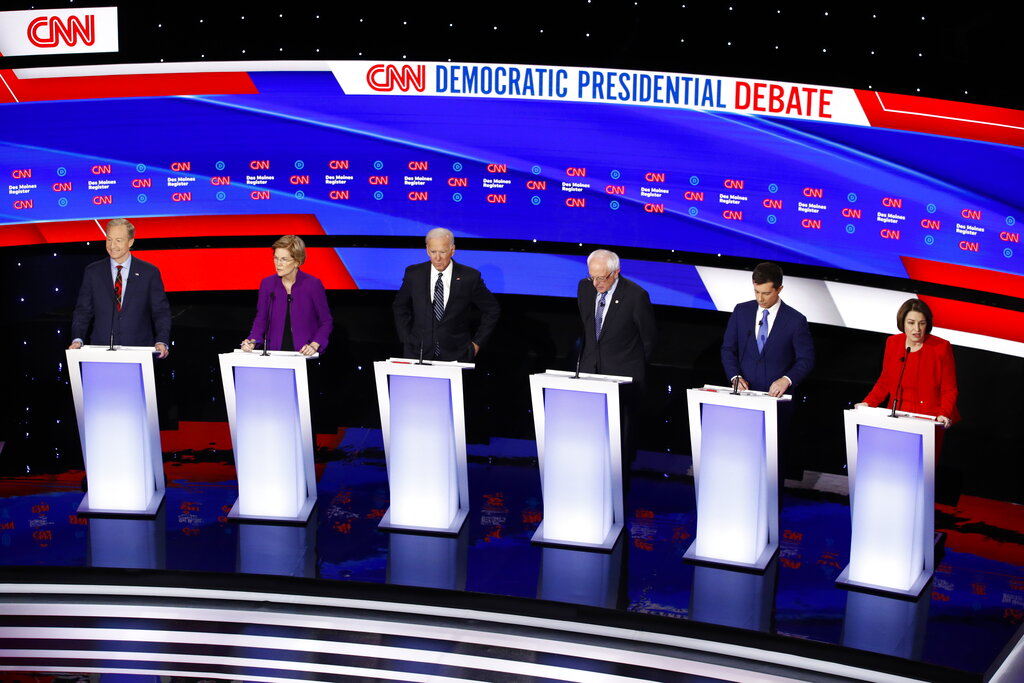 Six of the candidates vying for the 2020 Democratic presidential nomination took the stage Tuesday night in Des Moines for their last debate before the Iowa caucuses kick off the primary season in less than three weeks.

Here is how the candidates’ remarks stacked up against the truth.

WHAT THE FACTS ARE

Sen. Bernie Sanders said that his ‘Medicare for All’ plan would cost ‘substantially less’ than the current health care system, a characterization that many serious analysts contest.

“‘Medicare for All,’ which will guarantee comprehensive health care to every man, woman and child, will cost substantially less than the status quo.”

Medicare for all would be an enormous change to the health care system, and many key details are still unsettled. That makes it very difficult to provide precise estimates of what such a system would cost. A number of serious economists have considered the question in a rigorous way. Some believe that a Medicare for All system could cost less over the long run than the future under current policy. But several believe it will cost more.

Medicare for All would be able to squeeze savings out of the current system. It could pay lower prices to doctors, hospitals, and drugmakers. It would eliminate health insurance profit. And it could eliminate spending on administration and paperwork by simplifying the system.

But it also has features that would tend to increase spending. By covering Americans who currently are uninsured, it would incur new costs. It would also expand benefits beyond what health insurance typically covers, by including dental care and long-term care, among other services. Once those services are covered, economists assume more people will use them.

WHAT THE FACTS ARE

Andrew Yang won the internet, but can he win a 2020 caucus?

Sanders said that his health care plan will eliminate the large differences between the prices paid for health care in the United States and peer nations, a statement without much evidence to support it.

“Medicare for All will end the absurdity of the United States paying by far the highest prices in the world for prescription drugs and health care in general.”

As West Contra Costa schools teeter on the brink of insolvency, district officials are seeking to raise taxes — not to address their budget crisis but rather to issue more bonds for an out-of-control school construction program. It’s fiscal recklessness. Voters should reject Measure R on the March 3 ballot. The deceptively worded measure, which […]

Project could benefit all Danville residents, visitors There is a vocal opposition to the Magee Preserve project and I want to commend them for their past efforts that helped improve the current project public benefits. I also ask that they now join the Danville Town Council’s unanimous support of the project. Public benefits the new […]