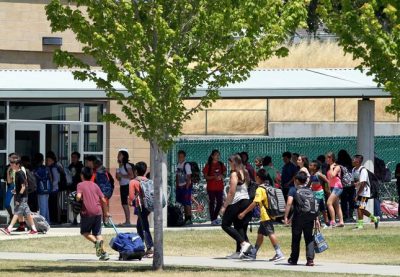 In seven East Bay districts, superintendents and elected board members have placed bond measures on the March 3 ballot to fund school construction. And not one of the measures uses the word “tax” in the 75-word summary that appears on the ballot.

That’s no oversight. Those officials, employing an ends-justify-the-means mentality, are jettisoning transparency in favor of political expediency. They understand that voters are more likely to support bonds if they don’t realize that they’re also approving tax increases.

Bonds are a form of borrowing that must be repaid. For state bond measures, that money is usually pulled from the general fund, meaning there’s no direct tax increase. But for local bond measures, property taxes must be increased to retire the debt.

In the seven East Bay ballot measures — which all require 55% approval for passage — the amount of the tax is there if you know how to translate the wording. Worry not, we’ll translate it for you.

Earlier this week, we published our opposition to West Contra Costa’s Measure R. Today we review five of the remaining six measures. (We leave our analysis of Berkeley’s bond measure for a later day.) For our reviews, we drew from official election documents as well as financial information and building-needs assessments the districts provided us.

In the older parts of the city, residents in 2008 and 2012 voted to tax themselves modestly to pay off $118 million of bonds for upgrades to aging schools.

Meanwhile, in the newer sections of Antioch, built since 1989, property owners had been paying so-called Mello-Roos taxes to fund the construction of the schools there. Those taxes expired in 2016.

Measure T would affect only the newer parts of the city. And only residents there vote on the measure. It would grant the district permission to sell $105 million of bonds. The money would be used to fund and maintain the schools within the former Mello-Roos area.

In comparison to other East Bay school districts and to the prior Mello-Roos taxes, that’s a modest amount, about the same as the bond tax for the other parts of the city.

The district has identified over $1 billion of upgrades needed in the schools across the city, about half of which is in the newer part of the city. Measure T is a reasonable approach to start paying for that.

From 2010-19, Dublin was the fastest growing city in California. Unfortunately, because of constraints of state law, all that development didn’t come with enough funds to build needed schools.

The result: The school district is bursting …read more

The Latest: Cyprus OKs US request to deploy evacuation team

TEHRAN, Iran (AP) — The latest on U.S.-Iran tensions after the U.S. airstrike that killed Iran’s top general (all times local): 4:50 p.m. An official says the Cyprus government has approved a U.S. request to temporarily deploy a “rapid reaction” team to help evacuate personnel from U.S. diplomatic missions in nearby countries if needed. Cyprus […]

By Bill Barrow and Michael R. Blood | Associated Press LOS ANGELES — Los Angeles Mayor Eric Garcetti is endorsing Joe Biden for the 2020 Democratic presidential nomination, giving the former vice president another high-profile supporter as he tries to demonstrate a wide base of support across the party. Garcetti’s decision comes Iess than a […]