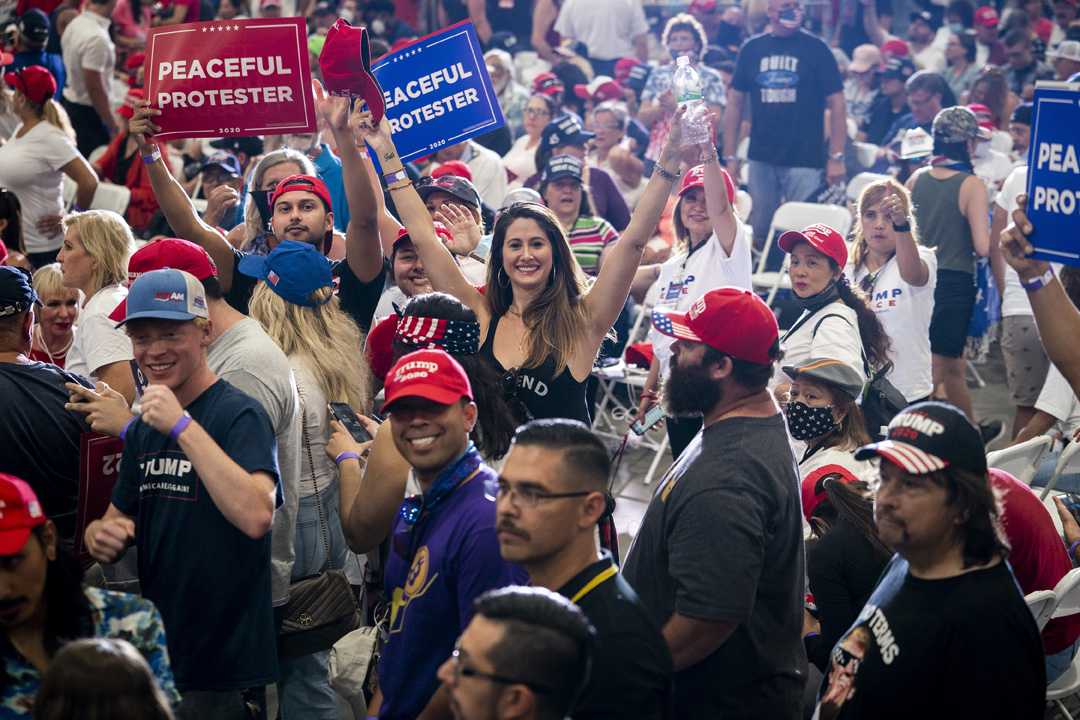 LAS VEGAS (AP) — In open defiance of state regulations and his own administration’s pandemic health guidelines, President Donald Trump hosted his first indoor rally since June, telling a packed, largely maskless Nevada crowd that the nation was “making the last turn” in defeating the virus.

Eager to project a sense of normalcy in imagery, Trump soaked up the raucous cheers inside a warehouse Sunday night. Relatively few in the crowd wore masks, with a clear exception: Those in the stands directly behind Trump, whose images would end up on TV, were mandated to wear face coverings.

Not since a rally in Tulsa, Oklahoma, that was blamed for a surge of coronavirus infections has he gathered supporters indoors.

“We are not shutting the country again. A shutdown would destroy the lives and dreams of millions Americans,” said Trump, before using his inflammatory moniker for the coronavirus. “We will very easy defeat the China virus.”

He didn’t mention the pandemic’s death toll — it has killed nearly 200,000 Americans and is still claiming about 1,000 lives a day.

The rally in Tulsa, which was his first in three months after the coronavirus reached American shores, was a disaster for the campaign, a debacle that featured a sea of empty seats and a rise in COVID-19 cases, including on his own staff. One prominent Trump supporter at the rally, businessman and former presidential candidate Herman Cain, died of COVID-19 weeks later, though it was not clear if he contracted the virus in Tulsa.

Recognizing that many supporters were uncomfortable about gathering in a large group indoors, where the virus spreads more easily, the Trump campaign shifted to holding smaller, outdoor rallies, usually at airstrips. But those rallies have grown in size in recent weeks, with little social distancing and few masks.

And on Sunday, they returned indoors, in part as a nod to the Las Vegas-area heat. Temperature checks were given to all upon entrance at the industrial site in Henderson and while masks were encouraged, few wore them.

Nevada Gov. Steve Sisolak, a Democrat, has limited in-person gatherings to 50 people since May, a recommendation based on White House reopening guidelines. In a statement released just before the rally began, Sisolak said Trump was “taking reckless and selfish actions that are putting countless lives in danger here in Nevada.”

“To put it bluntly: he didn’t have the guts to make tough choices,” Sisolak said of Trump’s handling of the virus. “He left that to governors and the states. Now he’s decided he doesn’t have to respect our State’s laws. As usual, he doesn’t believe the rules apply to him.”

The city of Henderson informed Xtreme Manufacturing on Sunday that the event as planned was in direct violation of the governor’s COVID-19 emergency directives and that penalties would follow. The Trump campaign pushed back against the restrictions, with the president saying he would support those in attendance “if the governor came after you.”

“If you can join tens of thousands of people protesting in the streets, …read more

By Eric Tucker | Associated Press WASHINGTON — A whistleblower’s allegation that he was pressured to suppress intelligence about Russian election interference is the latest in a series of similar accounts involving former Trump administration officials, raising concerns the White House risks undercutting efforts to stop such intrusions if it plays down the seriousness of […]

Since President Donald Trump lost Colorado by nearly 5 percentage points in 2016, its voters have taken a sharper turn away from him — leaving the state looking like an also-ran among battlegrounds this year. But that doesn’t mean Trump and his allies have conceded Colorado. Or that former Vice President Joe Biden, his Democratic […]

Cory Gardner: Peaceful transfer of power “a hallmark of our democracy”

Republican U.S. Sen. Cory Gardner on Thursday stressed the importance of a peaceful transfer of power after President Donald Trump declined Wednesday to commit to a peaceful transfer to Democrat Joe Biden if he loses in November. “That’s something I’ve talked about in speeches from my very first days when Nancy Pelosi peacefully handed the […]