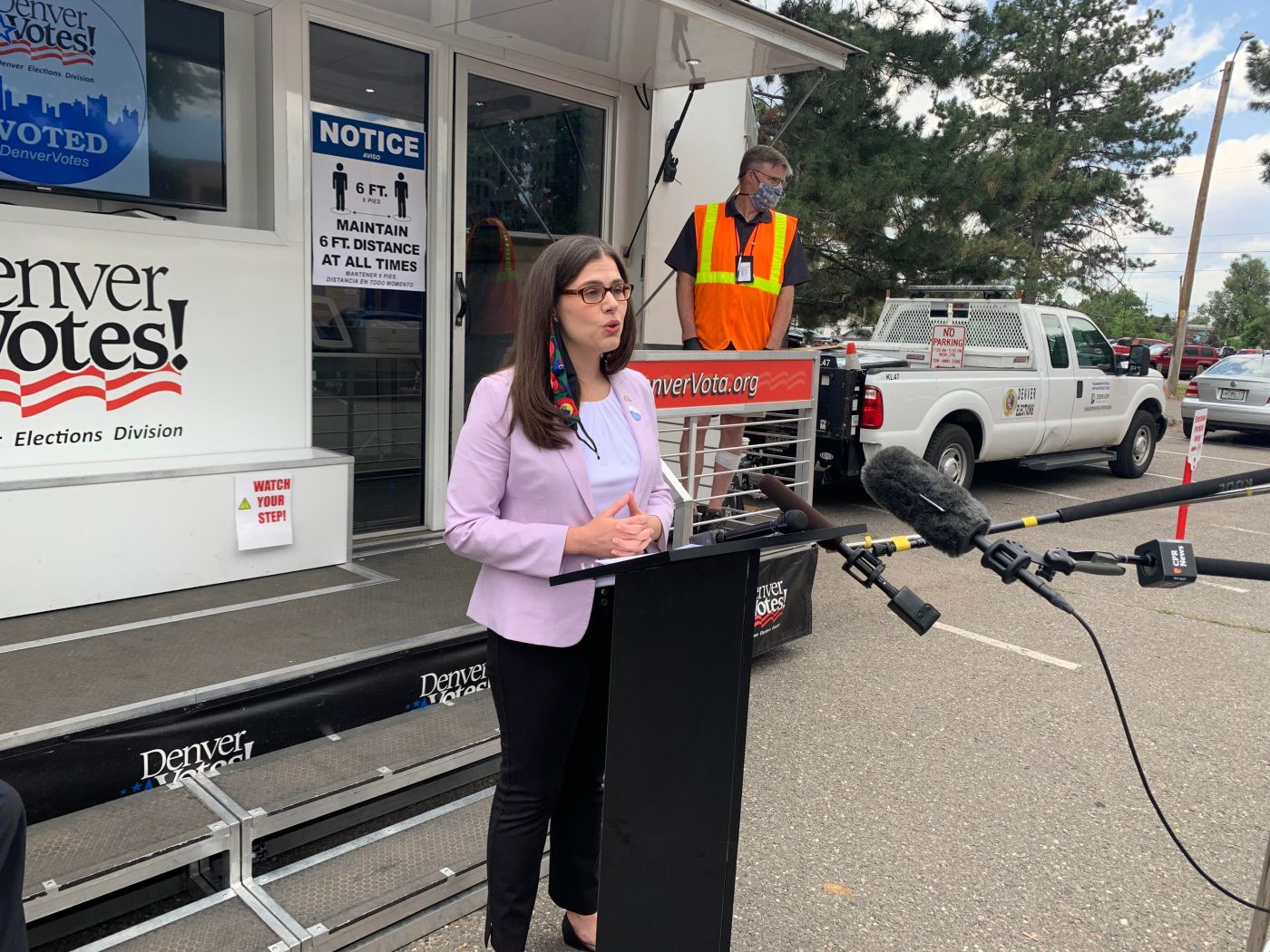 Vote casting in Colorado’s Tuesday primary contest has been fast and furious, eclipsing the million mark over the weekend and easily outpacing the number of ballots returned on primary Election Day two years ago.

As of noon Tuesday, nearly 1.3 million ballots had been returned to clerk’s offices statewide compared to the 1.16 million ballots cast in the 2018 primary. The election two years ago set a record for the largest primary turnout among Colorado registered voters in at least a decade.

Politics watchers in Colorado have theories for the surge in voting this year ranging from the COVID-19 pandemic to the roiling political atmosphere centered on racial injustice to the fact that the state’s first presidential primary in 20 years — held just four months ago — helped smooth out registration hiccups that can lower voter participation.

Colorado Secretary of State Jena Griswold showed off a mobile voting center in Denver’s Swansea neighborhood Tuesday morning, telling reporters that the state’s versatile election system — with multiple ways to fill out and return ballots — is the “national standard.”

“At no time in our state’s history has voter access been more important than right now,” Griswold said. “The pandemic and the protests of police brutality of Black Americans that we have seen reinforces how vital voting is to our society.”

Political analyst Eric Sondermann agreed that “people’s antenna are highly tuned in at this moment” and that “the stakes of all political issues are elevated,” as streets in cities across the nation filled with protesters following the death of a Black Minneapolis man at the hands of police in May.

Sondermann admitted to being somewhat surprised by the size of the gap between turnout in 2020 and 2018 given the fact that there is just one statewide race on this ballot — the contest between John Hickenlooper and Andrew Romanoff for the Democratic nomination to take on Republican U.S. Sen. Cory Gardner in November.

Democratic primary ballots are being returned at a far greater rate than Republican ballots — 734,000 to 484,000. Unaffiliated voters in Colorado were able to participate in primaries for the first time starting two years ago, after voters passed a measure allowing those not registered to a party to take part in primary elections. Unaffiliateds can vote either party’s ballot but not both.

The uptick in 2020 voting is echoed in counties big and small. Denver has already received more than 154,000 ballots from voters and that’s not counting the ballots that came in during the hours before polls closed Tuesday. The 2018 primary saw just over 146,000 ballots cast by Denverites when all was said and done.

In Chaffee County, Clerk & Recorder Lori Mitchell said she has already gotten back nearly 6,200 primary ballots as of Monday, well north of the 5,730 ballots that were cast in June 2018.

The Associated Press The Latest on protests over racial inequality (all times local): 3:15 p.m. LOUISVILLE, Ky. — Police in Kentucky say a suspect is in custody in the death of a man who was fatally shot amid a protest over the killing of Breonna Taylor. Interim Louisville Police Chief Robert Schroeder says the suspect […]

Efforts to create a paid family and medical leave program in Colorado ran aground at the statehouse again this year with coronavirus partly to blame. With the sponsors of that would-be legislation backing them, a group of supporters on Monday formally launched their campaign to get paid leave on Colorado’s November ballot and passed into […]

By Samuel Petrequin | Associated Press BRUSSELS — A bust of former Belgian King Leopold II was taken off public display in the city of Ghent on Tuesday as Belgium marked the 60th anniversary of the end of its colonial rule in Congo. The removal of the monarch’s likeness took place only hours after Belgium’s […]