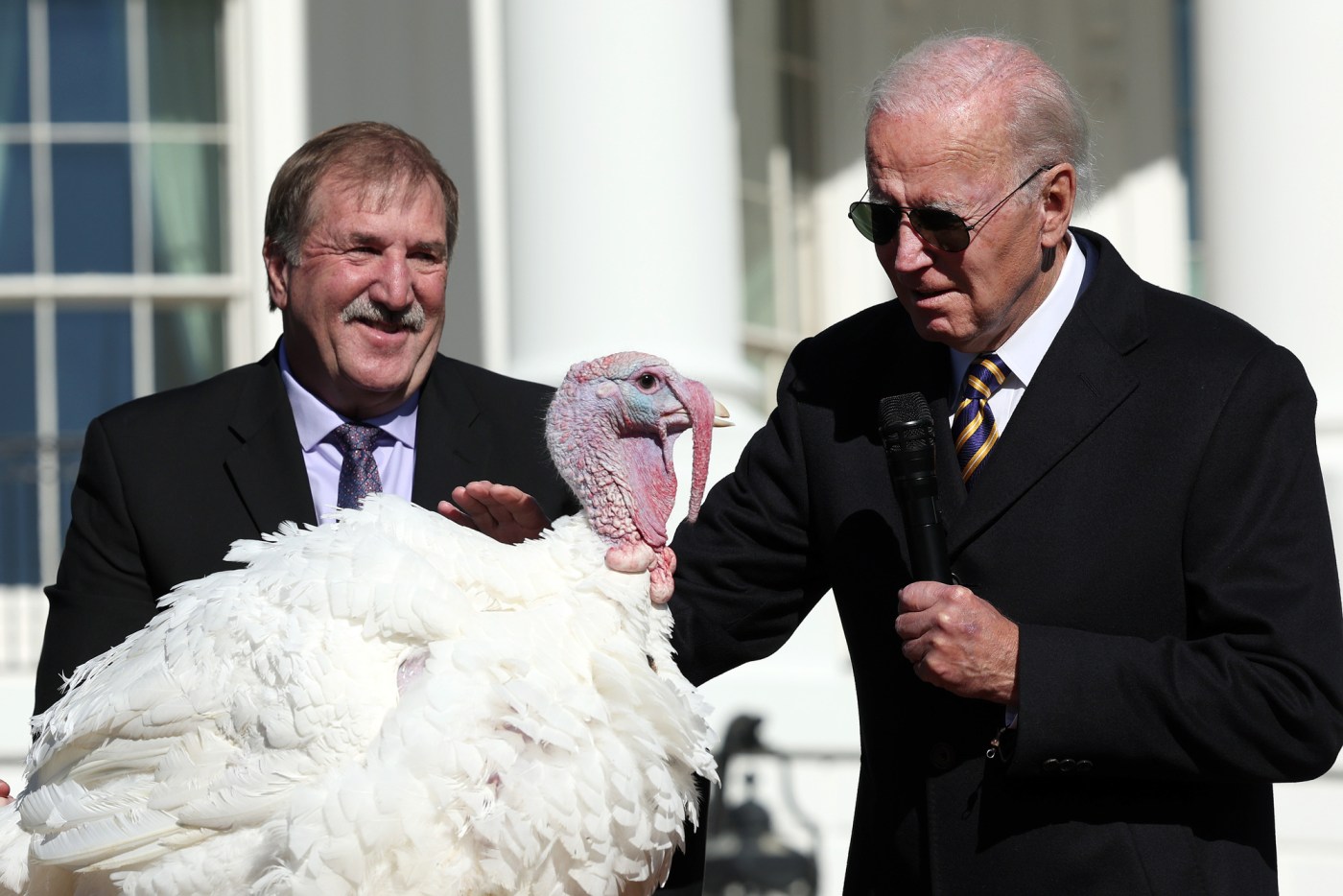 WASHINGTON — President Joe Biden continued a 75-year tradition Monday and pardoned a pair of Thanksgiving turkeys named after his favorite flavor of ice cream while cracking jokes about his political party’s better-than-expected performance in this month’s midterm elections.

“The votes are in, they’ve been counted and verified,” Biden said as he welcomed turkeys Chocolate and Chip before hundreds of people gathered on the South Lawn in unseasonably cold weather. “There’s no ballot stuffing. There’s no fowl play. The only red wave this season’s gonna be if German shepherd Commander knocks over the cranberry sauce on our table.” Commander is his dog.

Chocolate and Chip, each weighing nearly 50 pounds (23 kilograms), were driven up from North Carolina on Saturday. They were checked into a room at the Willard hotel, near the White House, to await their visit with the president and his declaration of their freedom.

Chocolate chip is Biden’s favorite flavor of ice cream. The president joked at the event that “we could have named them Chips and Science,” after the $280 billion CHIPS and Science Act that he championed and signed into law this year.

“I hereby pardon Chocolate and Chip,” Biden declared. Before the ceremony, his son Hunter Biden brought his toddler son, Beau, who is almost 3, outside to see the turkeys.

Both gobblers were hatched in July in Monroe, North Carolina, according to the National Turkey Federation, sponsor of the turkey tradition, which dates to 1947 and President Harry Truman.

The burst of holiday activity at the White House followed a busy weekend personally for Biden and his family, along with midterm elections that saw the president’s Democratic Party perform well enough to defy historical trends that had forecast huge losses. Democrats will keep control of the Senate. Although Republicans will control the House when a new Congress is seated in January, Democrats did keep GOP gains in that chamber to a minimum.

The official White House Christmas tree was delivered Monday, and the Bidens helped serve a Thanksgiving-style dinner on a North Carolina Marine Corps base later that evening.

Biden and his wife, Jill, were scheduled to leave Washington on Tuesday to continue their family tradition of spending the Thanksgiving holiday on the Massachusetts island of Nantucket. They hosted the wedding of their granddaughter Naomi Biden at the White House on Saturday, followed by a family brunch on Sunday for the president’s 80th birthday.

Humor aside, the president ended Monday’s White House event on a serious note, encouraging people to get their COVID-19 vaccines to ensure a healthy holiday season. He also encouraged Americans to reflect and “be grateful for what we have.”

“This is a special time … in the greatest nation on Earth, so let’s be thankful,” he said.

Chocolate and Chip were set to live the rest of their lives on the campus of North Carolina State University.

Jill Biden did her part by receiving the official White House Christmas tree. The 18 foot-tall (5.5 meters) Concolor fir grown on a farm in Pennsylvania, the state where …read more

In a city strewn with cracked, crumbling and even nonexistent sidewalks, a huge influx of cash is on the way to address the problem courtesy of Denver voters who supported Initiated Ordinance 307 in the Nov. 8 election. But pedestrians and wheelchair users should continue to watch where they walk and roll. Depending on which […]

By David Biller and Carla Bridi | Associated Press BRASILIA, Brazil — Brazilian President Jair Bolsonaro is contesting his defeat in the October election and calling on the electoral authority to annul votes cast on most of the nation’s electronic voting machines, citing a software bug that independent experts have said didn’t affect the reliability […]

The Denver Rescue Mission, the Christian organization that operates homeless shelters in Denver and holds an $8.7 million city contract, says it will remove anti-LGBTQ language from its employee handbook that seemingly gave workers a choice between embracing their sexual orientations and gender identities and keeping their jobs. The plan to remove the recently installed […]