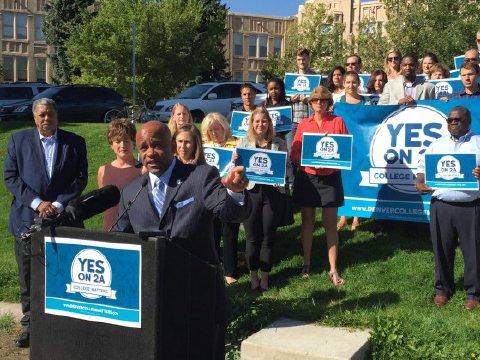 It was an effective strategy in 2018, when Denver voters passed four such measures. And now, in the middle of a pandemic and economic recession, it’s the strategy behind proposed sales tax increases on the 2020 ballot to tackle the city’s homelessness crisis and to combat climate change.

The money has to come from somewhere, said Councilman Jolon Clark, who sponsored measure 2A, which would fund environmental initiatives within Denver. If residents or city officials want to launch brand-new initiatives like that, or expand traditionally underfunded programs, there aren’t many options.

Even during a bullish economy, Clark said, Denver’s budget is stretched so thin that any new or increased expenditures will mean cutting services or staff.

“Continuing even to find the money to keep up with what our citizens demand … is near impossible for our current budget,” Clark said.

With the pandemic hitting Denver’s tax revenue worse than the Great Recession, the city’s budget is already short hundreds of millions of dollars between 2020 and 2021, said Chief Financial Officer Brendan Hanlon. Cuts, hiring freezes and furloughs are on the horizon, not expanded services.

And already Denver’s sales and use tax rate sits at 4.31%, higher than that of most Colorado cities. The rate is 3.12% in Colorado Springs, 3.25% in Grand Junction and 3.85% in Fort Collins, respectively. Commerce City’s rate is higher, however, at 4.5%.

Should voters approve Clark’s measure and 2B, the tax proposal sponsored by Councilwoman Robin Kniech to fund services for the city’s homeless population, Denver’s sales and use tax rate would jump to 4.81%, though the two measures do exclude some items from the increase.

Still, voter-approved taxes are an efficient way to raise millions for causes Denverites care about. Hanlon pointed to the Parks Legacy Fund as an example. In 2018, voters approved a 0.25% sales and use tax increase to create the pot of money for new land, improvements and renovations.

“Otherwise, you would have to identify $30 million from somewhere else in your budget to satisfy that investment,” Hanlon said.

Actually, that number is higher. The Park Legacy Fund tax raised about $34 million in 2019 and is expected to raise at least $37 million annually this year and next, according to Mayor Michael Hancock’s proposed 2021 budget. So far, the bulk of that cash appears to have been spent on park and trail renovations and improvements, with some going toward buying new land.

The park tax and two others approved by voters in 2018 appear to be well received and working.

The Denver College Affordability Fund collected nearly $12 million in 2019 and is expected to raise about the same this year and next, …read more

WASHINGTON — The GOP push against Facebook and Twitter accelerated Thursday after Republican senators threatened the CEOs of the social media companies with subpoenas to force them to address accusations of censorship in the closing weeks of the presidential campaign. With Democrats boycotting the hearing, the Republican-controlled Senate Judiciary Committee voted to authorize the legal […]

WASHINGTON — President Donald Trump on Sunday declared he was ready to return to the campaign trail despite unanswered questions about his health on the eve of a Florida rally meant to kick off the stretch run before Election Day. His impending return comes after the White House doctor said he was no longer at […]

WILMINGTON, Del. — Kamala Harris, the Democratic vice presidential nominee, will suspend in-person events until Monday after two people associated with the campaign tested positive for coronavirus. Joe Biden’s presidential campaign said Thursday that Biden had no exposure, though he and Harris spent several hours campaigning together in Arizona on Oct. 8. Both have tested […]