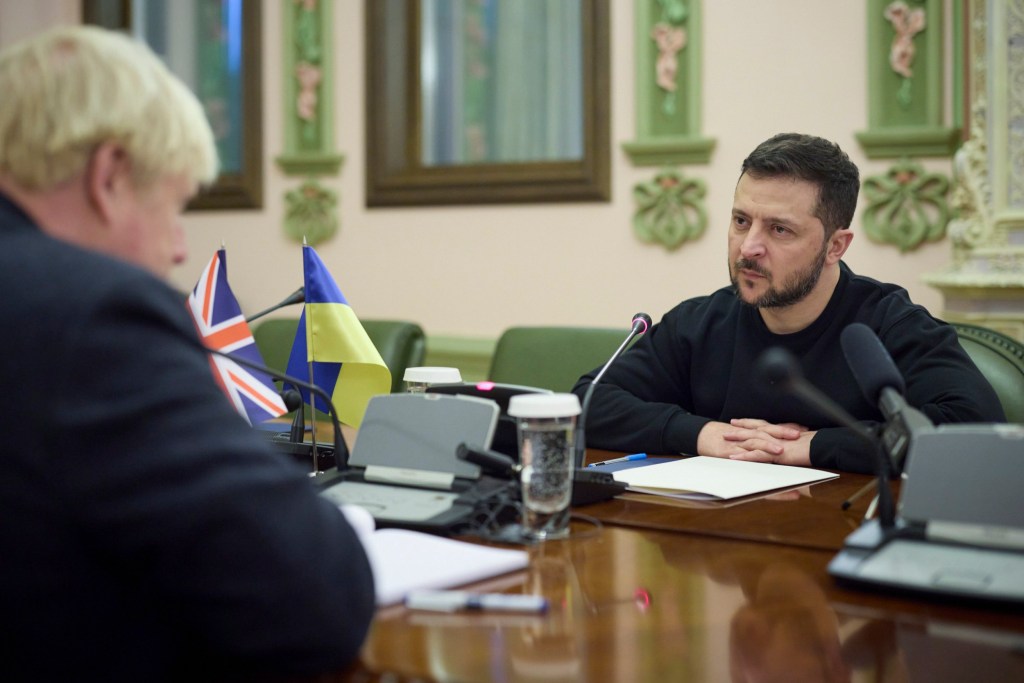 Ukrainian president Volodymyr Zelensky has praised his ‘special bond’ with Boris Johnson while branding Vladimir Putin a ‘nobody’.

Mr Zelensky, who turned 45 yesterday, appealed to members of Nato for more heavy weaponry in an interview with Sky News.

‘I saw the man who said one thing and then did another. So for me, I can’t understand – is it his decisions or somebody else?

‘So to meet what – to shake hands? Not interesting. To speak? I really don’t understand who makes decisions in Russia.’

Asked if it was too late for one-on-one talks with Mr Putin to prove useful in resolving the war, Mr Zelensky said: ‘Too late, not interesting. Who is he now? After full-scale invasion, for me he is a nobody.’

During the same interview, the Ukrainian president was also quizzed on his relationship with Boris Johnson, who quickly positioned himself as one of the most vocal backers of Ukraine on the world stage following the invasion last year.

Mr Zelensky declined to say whether Mr Johnson should get an official role representing the UK in Ukraine, appearing to laugh at the suggestion and indicating the former PM might not be ready for such a role.

But he declined to say whether he would like to see Mr Johnson enter Downing Street again, instead praising his ‘good relations’ with Rishi Sunak.

‘I think that is not correct for me to support Johnson to be prime minister,’ he added.

‘I saw Johnson in different situations, I saw him not in war and then in full-scale war, that’s why we have special relations.’

This week nine countries joined Britain in a move to provide tanks to Ukraine, after the German parliament broke their deadlock and agreed to help arm the war-torn country.

During what Zelensky hailed as a ‘historic day’, Germany will initially send 14 Leopard 2s to Ukraine, and aims to provide 80 tanks overall.

The US confirmed it will supply 31 Abrams M1 tanks, and The UK has already said it will send 14 Challenger 2 tanks.

Presidential adviser Mikhailo Podolyak said he hopes the move will act as a precursor to the supply of more long-range missiles.

Kenneth Noye in custody after being found guilty of the 1996 murder of 21-year-old Stephen Cameron (Picture: PA) The man who hid M25 road rage killer Kenneth Noye while he was on the run could be revealed in previously unreleased tapes, it is claimed. Noye was arrested in Spain in 1998, two years after he […]

Lesley Redgrift, 65, sprung into action and stamped the fire out (Picture: MEN Media) An electric blanket went up in flames on a woman’s lap after she was gifted it to help keep her energy bills low. Lesley Redgrift, 65, was watching TV at her home in Grimsby when she noticed smoke rising from the […]

He’s a generous tipper (pic: Twitch/Twitter) After sitting down for a quick lunch at Venice Beach, xQc decided to pull off a classic MrBeast move. It’s not often than you can spot top Twitch streamer xQc outside of his house, but when he does go out, he makes sure to fit as much as he […]