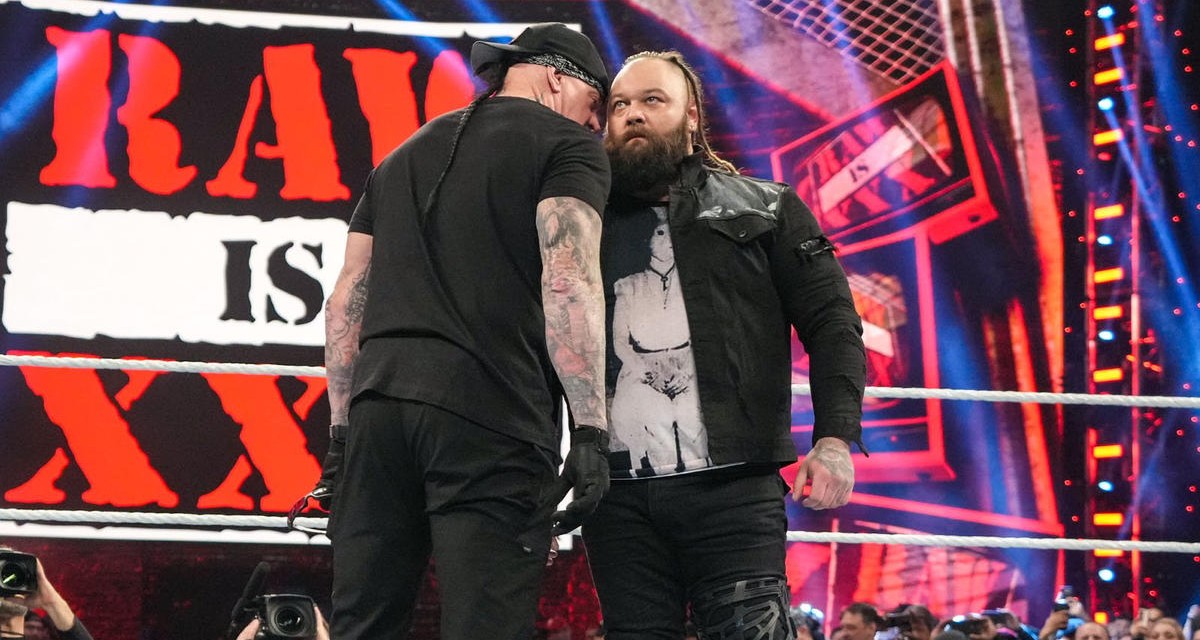 On Monday night’s special anniversary show, the legendary Hall of Famer had a passing of the torch moment with the Eater of Worlds and now the 35-year-old star has opened up on its significance.

The pair – who faced off at WrestleMania 31 when the Phenom beat the then-rising star – crossed paths again this week after Undertaker came out in his American Badass guise to confront LA Knight.

Wyatt’s rival had called out any legend from backstage after insisting they were living in the past like the Firefly Fun House host, and it was the Dead Man who answered the call.

Knight tried to make a swift escape but found his path blocked by Wyatt, who herded him back down to the ring and into a chokehold from ‘Taker.

However, instead of hitting his signature Chokeslam, the former world champion pushed Knight into a Sister Abigail from Wyatt, who took the chance to lay out his rival days before they face off in a Pitch Black Match at the Royal Rumble on Saturday night.

This moment justified a lifetime of sacrifices for me. A lifetime of people treating my uniqueness like it was a disease. Through all the bad times I never changed myself to fit anyoneâs narrative. Iâm proud of that. Thank you Taker. #SuckItLAKnight pic.twitter.com/nQHYWNq7CL

Bray and Undertaker teamed up to take out LA Knight (Picture: WWE)

Before Undertaker left, he shared a moment with the fan favourite and appeared to whisper something to him before leaving in a symbolic moment, and Wyatt has now revealed it meant more than fans realised.

Sharing pictures from last night and their WrestleMania clash in 2013, he tweeted: ‘This moment justified a lifetime of sacrifices for me. A lifetime of people treating my uniqueness like it was a disease.

‘Through all the bad times I never changed myself to fit anyone’s narrative. I’m proud of that. Thank you Taker. #SuckItLAKnight’.

Meanwhile, Undertaker himself suggested the exchange is one that will live on long in the memory of fans and the performers.

Wyatt returned to WWE in October 2022 after being shockingly fired in the summer of 2021, and he has since reclaimed his position as one of the company’s most popular performers.

WWE’s Royal Rumble airs Saturday night (January 28) at 1am on the WWE Network and BT Sport.

Denisha had the finger pointed at her this week (Picture: BBC/Fremantle Media/Ray Burmiston) This week’s episode of The Apprentice saw the remaining candidates take part in one of the series’ most iconic challenges, when the teams were tasked with sourcing a list of items for the least amount of money. Having travelled to Brighton for […]

Nintendo Switch 2 in 2024 – the facts and the speculation

What happens next? (pic: Nintendo) GameCentral attempts the impossible by trying to predict Nintendo’s future console plans and what comes after Zelda: Tears Of The Kingdom. The one thing you should never do when writing about video games is to try and predict Nintendo. Everyone knows that and everyone is always wrong when they end […]