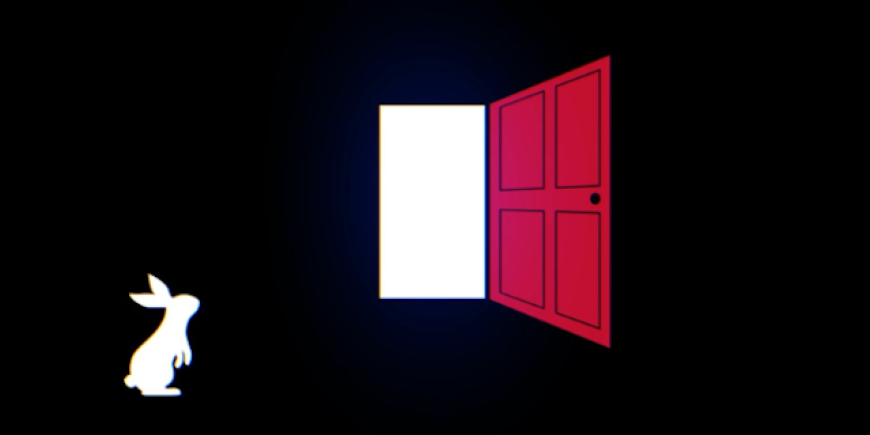 Is the White Rabbit leading to the return of Bray Wyatt? (Picture: WWE)

WWE dropped some more hints about the mysterious White Rabbit on SmackDown as fans continue to venture down a… rabbit hole.

The company has played this own brilliantly so far, from Jefferson Airplane’s song playing at live events and the occasional ad break to Raw’s QR code leading to a cryptic game of hangman, and fans are still pointing to a potential Bray Wyatt return.

On Friday night, fans spotted another code – this time in the background of a Hit Row skit – which led to a playable game online.

You’re tasked with leading the white rabbit through a maze to a red door – with some flames providing an obstacle – before leading the bunny through a portal with the word ‘patricide’ popping up.

In another twist, there are coordinates popping up which refer to Edmonton, the host city of Monday Night Raw this week.

The sensible move would be a big reveal at Extreme Rules in two weeks on October 8, which still leaves four shows – two each for Raw and SmackDown – to explore the mystery further.

The playable game lets fans lead the rabbit through a maze (Picture: WWE)

Winning the game gives you the word ‘patricide’ and coordinates (Picture: WWE)

Bray hasn’t been seen since just after WrestleMania 37 in April 2021, before getting shockingly released that summer in a move that left fans baffled.

However, there are murmurings he could be primed for a comeback, and plenty of people think he will be revealed as the mastermind behind the creepy goings-on over the past week or so.

On Monday’s episode of Raw, a QR code was shown on screen – once on a sign in the crowd, and another time on a wall behind Austin Theory backstage.

The code takes fans to a website with a landing page bearing the words ‘Feed Your Head’ and an image of the White Rabbit, while clicking on it takes you to a sinister game of Hangman.

At the top of the screen is the question ‘Who Killed The World?’ while the bunny tries to figure it out, first guessing – in order – the letters D, E, M, O, N.

Thankfully for us (and the rabbit) it gets the answer just in time: ‘You Did.’

This then prompts the message ‘Come with me’ – which is also the title in the URL – and both the date 9.23 and the time 9:23, which looks to be referring to this Friday’s SmackDown.

Is Bray Wyatt returning to WWE?

When it comes to Bray, there are plenty of teases here, with ‘come with me’, and the hangman game’s question and answer itself both being referenced in promos earlier in his career.

Plus, ‘Who killed the world?’ has conjured up the idea of the former world …read more

The Rambert Ballet have brought the gritty world of Peaky Blinders to the stage (Pictures: Johan Persson) Peaky Blinders is not just a TV show, it’s a full-on cultural phenomenon. If you need proof of that, here, off the back of immersive theatre shows, fashion shoots, soundtracks and movie rumours, is a dance version celebrating […]

To view this video please enable JavaScript, and consider upgrading to a web browser that supports HTML5 video While responding to a domestic violence call, police in Los Angeles, California fatally shot a 19-year-old who was holding what turned out to be an airsoft gun. Disturbing body camera footage of the September 17 shooting was […]

…read more Source:: Metro        (Visited 6 times, 1 visits today)Roll up! Roll up! First look at Hollyoaks’ horror stunt week in new preview clip as Silas’ deadly plan is revealed To view this video please enable JavaScript, and consider upgrading to a web browser that supports HTML5 video Hollyoaks is gearing up for what […]