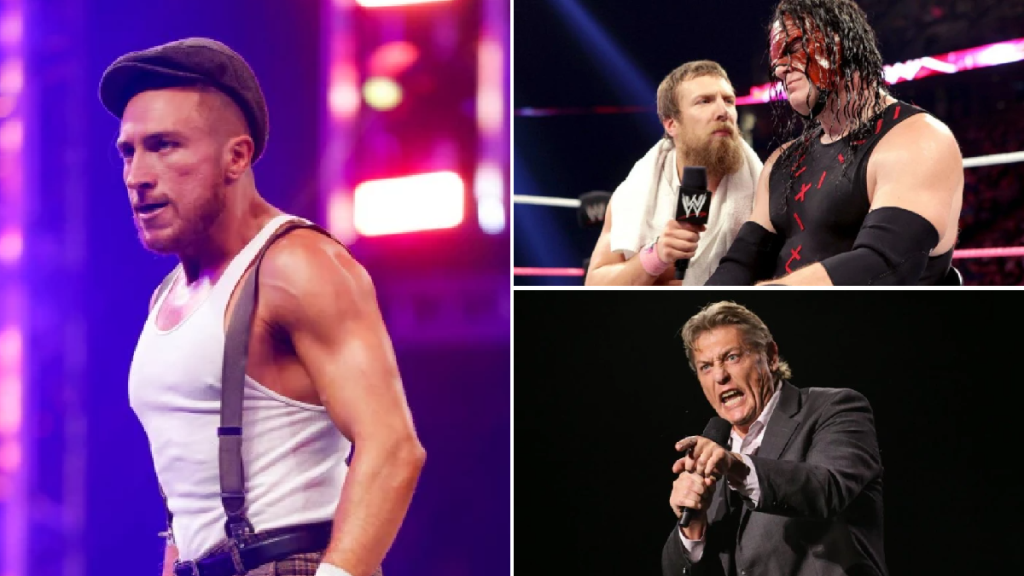 Butch has pointed to the success of Daniel Bryan and William Regal (Picture: WWE)

WWE star Butch is taking inspiration from William Regal and Daniel Bryan for his current run on SmackDown.

The British superstar – who was known as Pete Dunne before making the jump from NXT to the main roster earlier this year – is confidence in the new direction he’s taken on-screen, and a lot of that comes from the way two of his heroes took a similar path to the top.

He exclusively told Metro.co.uk: ‘My biggest inspirations in wrestling are people like Regal – some of his best work was the straightlaced stuff later in his career, right? But earlier in his run he was the commissioner doing all sorts of funny stuff.

‘People like Daniel Bryan, when he was here – part of what got hi, where he was, was the stuff with Kane. Everyone has variety, you can’t just be one thing forever and I’ve been with the company for six years.’

He noted that besides his NXT tag team with Riddle, he had largely been presented in the exact same way since 2016, and he’s embracing the chance to shake things up as the wild card alongside Ridge Holland and Sheamus.

He added: ‘It’s refreshing for me personally, to be able to focus on something else and have a different approach to it. And sort of broaden my horizons with wrestling because it’s been so long.’

Butch is grateful some fans feel so passionately about his work as the Bruiserweight, but he thinks people are being won over with his current run.

‘It will never be forgotten but people appreciate the Pete Dunne Bruiserweight stuff, and they will also appreciate the work that’s gonna be done under Butch,’ he said.

‘I’m just looking at it as an amazing opportunity, and just embracing and having fun with it. Working with Sheamus and Ridge is great too, so I’m excited to see what the future holds.’

Daniel Bryan rose up the ranks alongside Kane in Team Hell No (Picture: WWE)

There is something to be said for a stint like this transforming someone’s career, and Bryan – now working in All Elite Wrestling (AEW) under his real name Bryan Danielson – has a similar outlook when it comes to blending entertainment with in-ring quality.

He previously told Metro.co.uk: ‘I think that period was actually the making of Daniel Bryan, as far as a WrestleMania main eventer. That period was perfect for me, because it gave me a chance to show some character and be entertaining all that kind of stuff.

‘But then, we would go in the ring against The Shield, it would allow me to highlights some of my strengths – in those tag matches, just being a ball of fire and then burn to the ground essentially.’

WWE SmackDown airs Friday nights at 1am on BT Sport 1.

To view this video please enable JavaScript, and consider upgrading to a web browser that supports HTML5 video Another week, another tantalising set of dramatics in the Love Island villa for us to gnaw on – mostly involving what may soon be a love square between Ekin-Su Cülcüloğlu, Jay Younger, Paige Thorne and new bombshell […]

Father’s Day can be hard when your dad isn’t around to celebrate (Picture: Getty Images) Father’s Day is just around the corner ready to celebrate the paternal figures in our lives, but this day can be tough for those whose dads are no longer around. Seeing friends post pictures and quotes about their fathers can […]

Caption: Man who ’took married man miles away after spiking drink says sex was consensual’ Getty Images/iStockphoto A man feared to have used an ‘aphrodisiac’ to drug two men before sexually assaulting them has told a court everything he did was consensual. Luiz Da Silva Neto, 35, denies accusations that he trawled bars to ‘pick […]