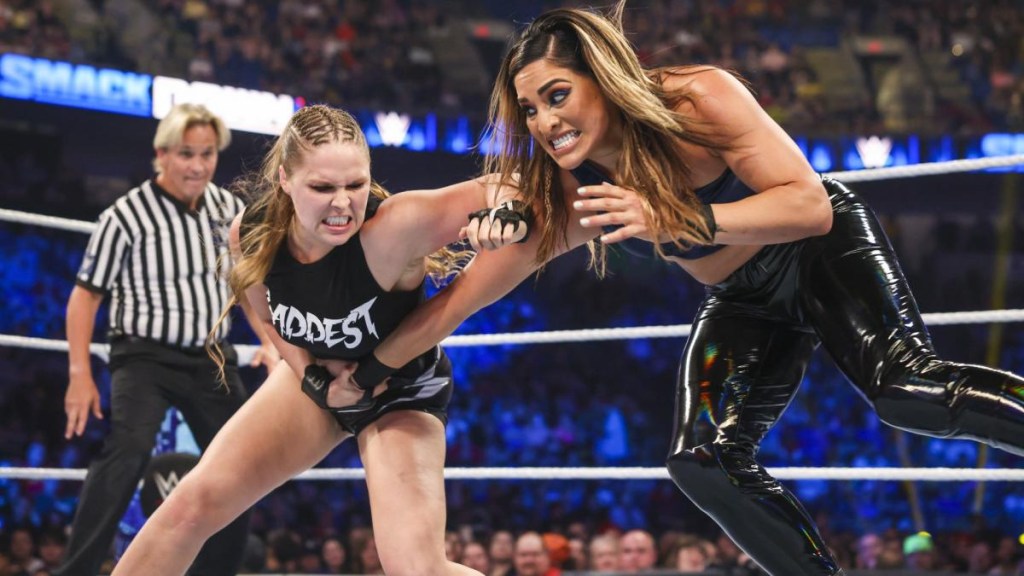 Rodriguez looked like a star against the champ (Picture: WWE)

WWE fans got a real taste of what Raquel Rodriguez is capable of on SmackDown as she battled Ronda Rousey.

The former NXT Women’s Champion was recently called up to the blue brand and she had the chance of a lifetime on Friday night when she accepted Rousey’s open challenge.

The Baddest Woman On The Planet was in a confident mood after defeating Charlotte Flair in a brutal I Quit Match at WrestleMania Backlash, and she was ready to take on anyone willing to step up to the plate.

Rodriguez answered the call and set the stage for a first-time match with the SmackDown Women’s Title on the line.

She put on a dominating display against Ronda, looking strong as she used her size and power to her advantage in a short but sweet clash, and she even seemed to be en route to a famous victory.

However, Rousey was able to reverse a powerbomb into a roll-up to get the pin to retain her gold – but Rodriguez looked every inch a star here.

She loses nothing in defeat with such a high profile match so soon into her SmackDown run, and she was able to showcase her skills against arguably the biggest name on the roster.

The fact she her loss can be portrayed as a fluke against the champion is a massive plus, and WWE would be wise to follow this up and take the opportunity to build its next big star.

The night kicked off with RK-Bro coming out to their typically amazing ovation before Randy Orton called out Roman Reigns and laid down a Championship Unification challenge – only to be met by Sami Zayn instead.

He was wearing a Bloodline shirt in a brilliant touch, he claimed to be there on the Tribal Chief’s behalf as a locker room leader.

Sami actually cracked up a bit when Riddle called him Rusty because of his hair, and the entertaining segment led to the pair of them facing off with suggesting that the Original Bro could earn the unification match if he won.

Zayn and Riddle got plenty of time to shine (Picture: WWE)

Adam Pearce couldn’t agree to the stipulation, but he did make the match, which was an absolute barnstormer of an opening contest between two incredibly talent stars, with Riddle getting the win with the Bro Derek.

In the main event segment of the evening, The Bloodline came out and Reigns suggested he had no one left to beat before Orton and Riddle came out.

The Apex Predator once again made a challenge for a tag titles unification match, which Jimmy Uso accepted while Jey said it’ll go down next week.

Lewis Hamilton’s F1 jewellery row could have been avoided with a ‘different approach’, says drivers’ chief

Lewis Hamilton delivered a protest over the F1 jewellery ban in Miami. (Photo by Jared C. Tilton/Getty Images) Lewis Hamilton’s increasingly intense row with motorsport governing body the FIA over the wearing of jewellery and piercings could easily have been avoided had the lawmakers taken a ‘different approach’ according to Grand Prix Drivers Association chairman […]

Seann Walsh promises Jimmy Carr is ‘personable and lovely’ off-camera: ‘He normally looks like a robot’

Jimmy is known for his often controversial jokes (Picture: Netflix) Seann Walsh has addressed what comedy pal Jimmy Carr is really like away from the stage, after joking the controversial comic is often thought of as ‘robotic.’ Jimmy and Seann will both feature in Katherine Ryan’s upcoming new Amazon Prime Video series, titled Backstage With […]