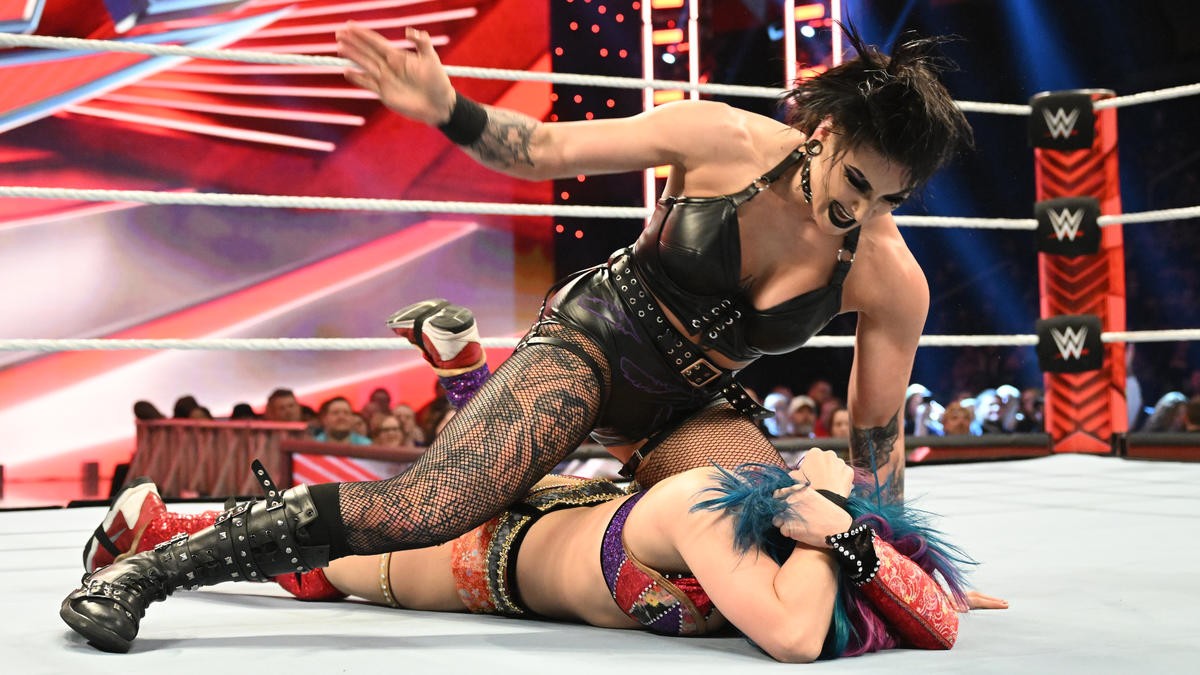 Rhea Ripley beat Asuka to get the advantage at WarGames (Picture: WWE)

Chaos reigned supreme on WWE Raw this week as stars brawled all over the shop just days before Survivor Series: WarGames.

Rhea Ripley defeated Asuka in the main event to give her team the advantage in this weekend’s brutal match, and the show ended with both squad’s scrapping all over the ringside area.

It all started at the top of the show, with Kevin Owens coming down to hype up WarGames and his beef with Roman Reigns, then bringing out Drew McIntyre and the Brawling Brutes to have their say.

The Judgment Day joined the fun to say they run Monday nights, which led to a brawl before Finn Balor, Dominik Mysterio and Damian Priest taking on Sheamus, Butch and Ridge Holland in a physical and exciting opening match.

The O.C. made their presence felt at the end, stopping Dominik from escaping as he got rocked with a Brogue Kick, with AJ Styles, Luke Gallows and Karl Anderson attacking after the bell, and Kevin Owens hitting Balor with a Stunner in the melee.

This continued as the night went on, and AJ Styles’ backstage interview was interrupted by his Survivor Series opponent Balor, leading to a brawl between The O.C. and Judgment Day, which was eventually broken up by security in the parking lot.

Ripley then beat Asuka in a great main event bout, with Damage CTRL and Nikki Cross coming to ringside, but Bianca Belair and Alexa Bliss evened things up, with another wild scrap kicking off after the bell.

Mia Yim, now going by the name Michin, joined the fun, with both WarGames teams brawling through the crowd as Asuka took everyone out with a huge dive to end the show on a great note.

Johnny Gargano came out expecting to face The Miz in the second match of the night, but the A-Lister had his hand bandaged up as he insisted he wasn’t able to compete.

He’d found Johnny Wrestling a worthy opponent though, bringing out Omos and his manager MVP to stack the decks against his rival.

Miz got involved partway through with Gargano trying to build momentum, but ultimately he fell as the Nigerian Giant picked up a huge win.

The Miz was delighted with the turn of events (Picture: WWE)

After some strong words from both Seth Rollins and Austin Theory, the latter faced Mustafa Ali, who has been on the receiving end of some brutal beatdowns lately.

Ali delivered another spirited performance and even hit the 450 Splash, but Theory rolled out of the ring to avoid the loss, and then recovered to hit the A-Town Down for the win.

After the break, Bobby Lashley came down as he and Theory exchanged strong words before a brawl broke out, with the former Mr. Money In The Bank cracking his rival with a steel chair to no real effect.

Billy Ray Cyrus is engaged to Firestone (Picture: Instagram) Billy Ray Cyrus has officially confirmed his engagement to Firerose, after months of speculation. The lovebirds were linked earlier this year, following the Achy Breaky Heart singer’s split from wife Tish Cyrus, after nearly 30 years of marriage. Singer Firerose, 34, was later pictured flashing an […]