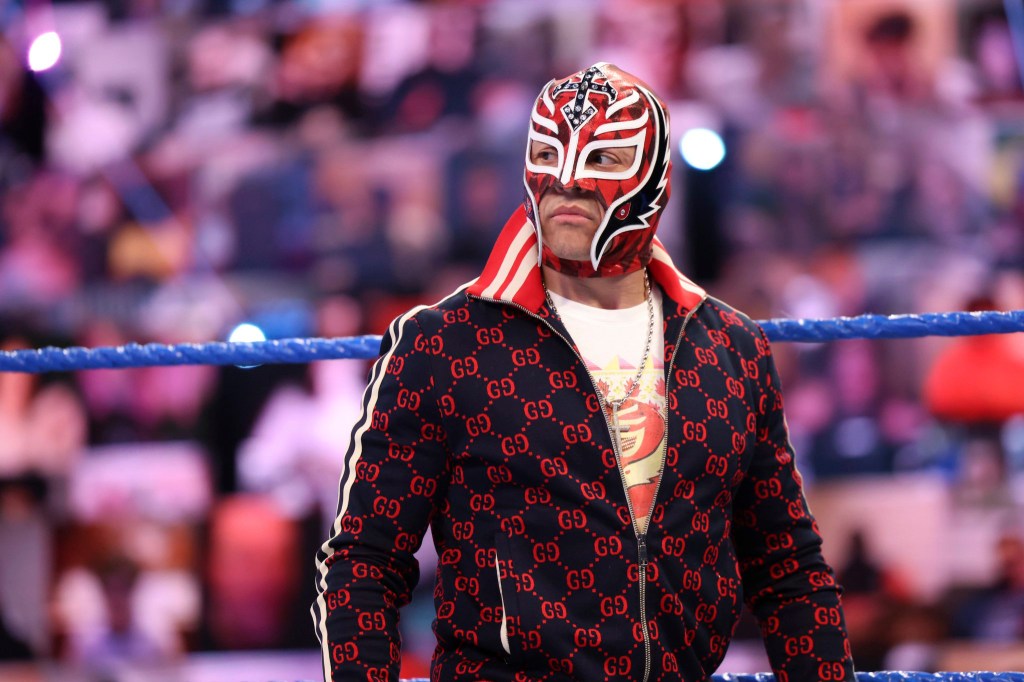 Rey Mysterio is embroiled in a better feud with his son Dominik (Picture: WWE)

The masked luchador has been embroiled in an intense storyline feud with his real life son over the past few months, and Dom turned up to the family home on Thursday night with fellow Judgment Day star Rhea Ripley to sent a message to his famous dad.

‘I’m almost positive the family’s gonna like you. The food’s gonna be delicious,’ Dominik said to Rhea as the pair walked up the drive at the Mysterio family home.

Dom’s mum Angie didn’t look impressed as she answered and almost immediately asked why there was a crew there filming, and shut the door in their face.

Rey was next to face the unwelcome guests, and he could be seen adjusting his mask as he opened the door and wondered why his son – who has followed in his footsteps as a wrestler – had shown up.

‘I’m here for the holidays,’ Dom argued, but his dad fired back: ‘No, no, please leave!’

Police are treating an explosion in Strabane as the attempted murder of two officers (Picture: PA) Three terror suspects are being held in Northern Ireland after police were targeted in a bomb attack. Two officers narrowly avoided injury when an explosive device was detonated near their car while it was on patrol in County Tyrone […]

Friends’ Matthew Perry says opening up on addiction issues in memoir helped others: ‘Five different people read it and checked into rehab the next day’

These blazing clouds are only visible in infrared light, making it an ideal target for Webb (Picture: Nasa) Nasa’s James Webb telescope has blessed us yet again with a stunning picture of the cosmos. This time it’s the birth of a star in the form of a fiery hourglass. The James Webb Space Telescope has […]