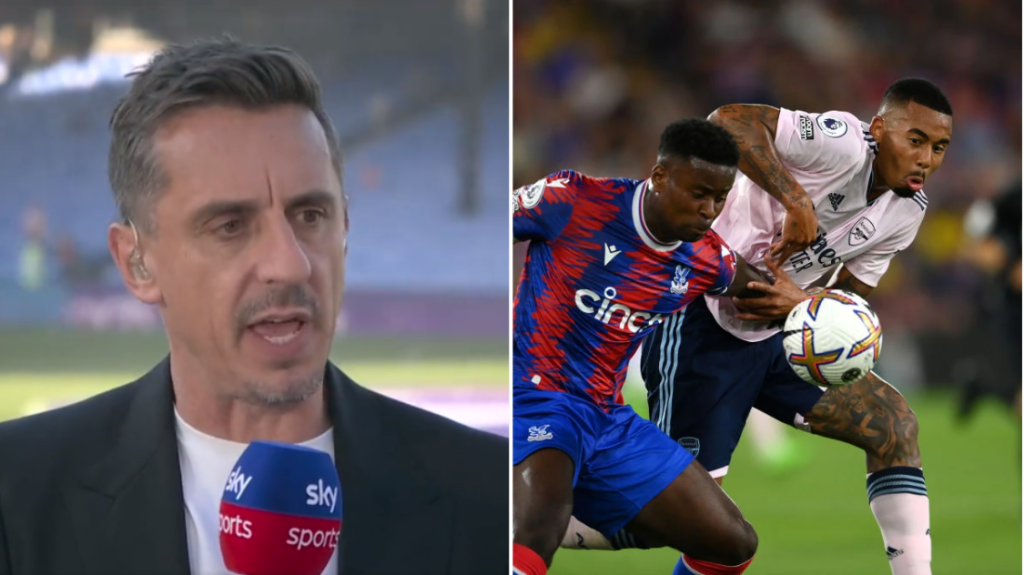 Gary Neville has hailed Gabriel Jesus after the striker impressed on his Arsenal debut in the victory over Crystal Palace.

Jesus completed a £45m move from Manchester City over the summer and starred in pre-season, scoring seven goals in five matches.

While he was not able to continue his brilliant goalscoring run against Palace, Jesus nevertheless contributed to Arsenal’s hard-fought 2-0 win at Selhurst Park.

The Brazilian tormented Crystal Palace’s defence in the first half, with his runs and movement impressing Neville and fellow Sky Sports pundit Jamie Carragher.

‘Arsenal were absolutely electric up front in the first five or 10 minutes. You were just thinking “wow”, watching Jesus,’ Neville said.

‘We saw glimpses of it at Manchester City but we watching him tonight and it was magical. The runs he was making were absolutely brilliant. Jesus just looked a level above.’

Former Liverpool defender Carragher added: ‘Jesus was excellent, he really was. He was so sharp, he was just electric.

‘He did one run and I just couldn’t believe it. I was so glad I wasn’t playing against him. He was sensational in that first half.’

On Arsenal’s performance, Neville said: ‘I think Arsenal will be really pleased with that victory, especially after what happened in the first game last season [when they lost to Brentford].

‘Crystal Palace threw everything at them but Arsenal withstood it. Arsenal’s defence stood up to it, the defenders did the job in the second half.’

‘We knew it would be hard here but we were strong and solid,’ he said. ‘I’ve waited a long time to make my debut and I’m happy to start with a clean sheet and a win. It’s important for confidence.

‘It helped me to spend two years on loan in France because I’m young and I need to play. Now I’m back and I hope we can have a good season.’

Coronation Street spoilers: Kelly in tragic car crash after having sex with Aadi

Aadi sees Kelly has crashed his car (Picture: ITV) Aadi Alahan (Adam Hussain) in Coronation Street thinks Kelly Neelan’s (Millie Gibson) idea of pretending their engaged in order to win a free holiday is brilliant. There is a problem, however, as it appears Kelly ends up taking things a bit more seriously than her boyfriend. […]

Michael Essien won four FA Cups with Chelsea (Picture: Getty) Gary Neville has revealed who he thinks are the two most underrated players in Premier League history. Chelsea news, exclusives and analysis Sign up Privacy Policy The Sky Sports pundit spoke about a range of topics on Monday Night Football and was also quizzed about […]

My little girl, Jasmine, is gorgeous. She loves feeding ducks, petting the animals at the local farm and going to the swimming pool.  When we go to her auntie’s house, she adores playing with her dog, Rolo. During the day, at the park, she’d have me push her for hours in the swing if I […]