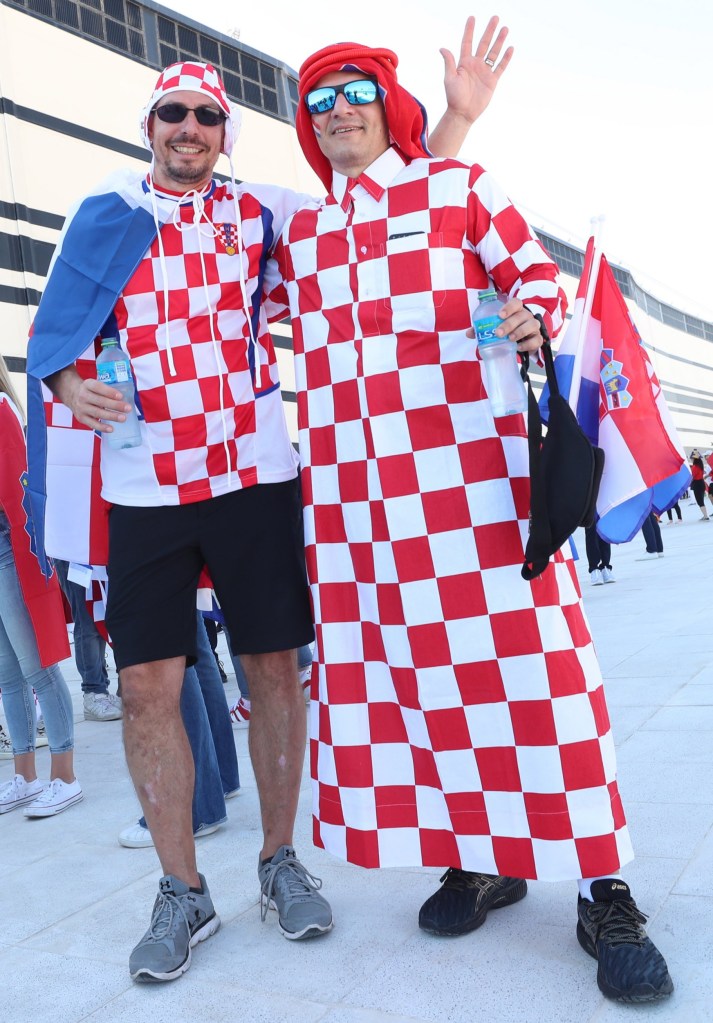 Football fans in Qatar have been told to remove any traditional Arab clothing before they enter pubs, over fears it will offend locals.

Security staff at a number of bars throughout Doha have turned away fans for attempting to drink alcohol while clad in traditional Islamic garbs such as robes and headdresses – following complaints from Qataris that it is offensive to their faith.

The sale of alcohol has been severely restricted throughout the Gulf state but is still available in a small number of four and five-star hotels in the area, which have become hotbeds for travelling fans desperate for a drink.

Ankle-length robes known as thawbs are a common form of clothing in Arab nations, and garments decorated in the team colours of the 32 nations playing at the World Cup have been a popular form of dress for visiting fans.

But while the robes have largely been adopted as a show of endearment towards the host nation, Qataris are reportedly less than impressed with the lack of respect shown to Islamic culture by the visitors.

A local named Hamad, who only wanted to give his first name, told MailOnline: ‘While we welcome people trying to appreciate our culture, I find it offensive that they are wearing our traditional dress and drinking alcohol. It should not be allowed.

Arabic robes daubed in the colours of World Cup teams have been a popular form of dress for visiting fans in Qatar (Picture: EPA)

Yet fans have been left upset after being told they can’t drink alcohol while dressed in the robes due to it being considered offensive to locals (Picture: Getty)

‘The thawb and ghutra are a symbol not just of Qatari culture but Islamic culture. I know some people have voiced their concerns to security staff about people drinking alcohol while wearing them.’

His views were echoed by another local named Khalid, who added: ‘I am very proud of my Arabic clothing and happy that fans are wearing it to enjoy themselves at the World Cup.

‘But having it on while they are getting intoxicated is not acceptable.’

According to local sources, the ban does not apply to fans who are only wearing the ghutra, a traditional Islamic headdress which has been widely adopted by visitors to the city.

One bouncer said: ‘We’ve been told that it’s only fans who are wearing the robe and the headdress who cannot enter and have to change.

‘It seems a bit strict to me because this is a World Cup and everybody is meant to be having a good time. But we are just following orders.’

Yet the thawbs are not the only form of clothing which has caused controversy since the start of the World Cup, after footage emerged of several England fans being turned away from a stadium after arriving dressed up as Crusaders daubed with the …read more

Gareth Southgate had a night to largely forget against the States (Picture: Getty Images) England’s World Cup momentum was halted somewhat after an underwhelming goalless draw with United States of America on Friday night. Spirits were high after the 6-2 romp against Iran on Monday, but the Three Lions could not hit those heights again, […]

Adele has priceless reaction to fan using filter for selfie: ‘What have you done to my face?!’

A dedicated team has been set up to find the suspect as soon as possible (Picture: Getty) A manhunt has been launched in connection with three possible kidnap attempts in Manchester. Police say a 15-year-old girl was approached by a stranger who tried to force her into a car in the latest in a string […]