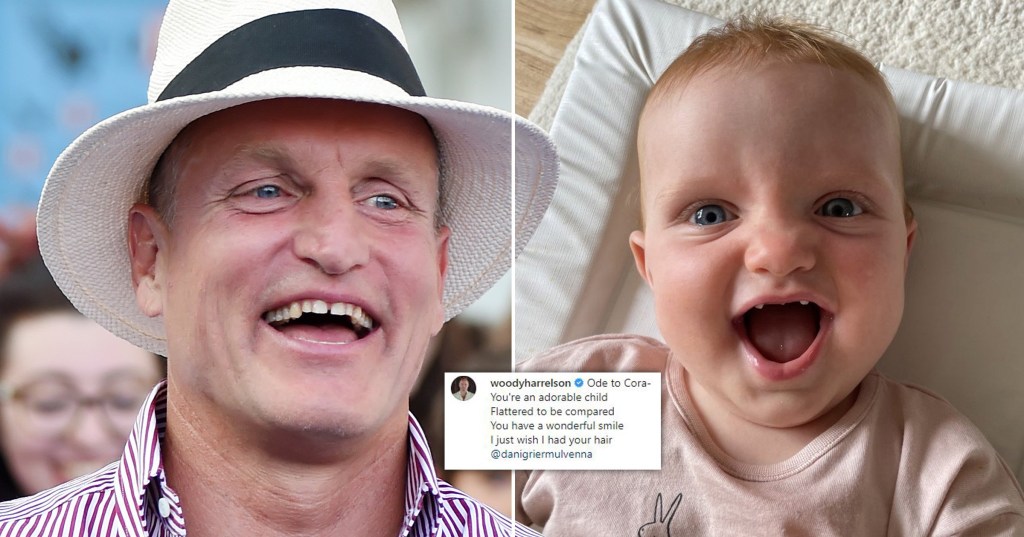 Woody Harrelson has responded to a baby in Northern Ireland who has an uncanny resemblance to him (Picture: Getty Images/Twitter/Instagram)

In one of the weirdest yet most heartwarming stories of the week, Hollywood actor Woody Harrelson has written a poem for a nine-month-old baby who looks the spitting image of him.

There are plenty of people with celebrity doppelgangers, but usually you’d be around the same age before people start pointing out resemblances.

This is not the case for nine-month-old baby Cora, whose photograph has been shared tens of thousands of times this week after her mum made the – genuinely astute – comparison.

Danielle, from Northern Ireland, took to Twitter earlier this week where she shared a side-by-side comparison of sweet baby Cora and Cheers actor Woody.

And, in a lighthearted caption, wrote: ‘Ok but how does our daughter look like Woody [Harrelson].’

The internet – understandably – absolutely raved about the unlikely lookalikes, and it went so viral that it eventually reached Woody himself.

Ok but how does our daughter look like Woody Harreslon pic.twitter.com/v3oZbXDrQM

And the actor, who is clearly one of the sweetest people in the world, responded by writing a poem for the occasion.

‘You’re an adorable child/ Flattered to be compared.

‘You have a wonderful smile/ I just wish I had your hair.’

And in yet another cute twist, the Venom actor made sure Danielle saw the post, tagging her in the quatrain poem.

To which she responded: ‘You’ve made our day ❤️ can’t wait to show her this when she’s older, you have another fan for life.’

Danielle later took to Twitter where she wrote: ‘It’s not every day Woody [Harrelson] writes your daughter a poem!’

The incredibly wholesome interaction has resonated with hundreds of thousands of people, including celebrities, who flocked to Woody’s post to share their love for the piece.

Alex Rider star Alex Pettyfer shared a series of laughing emojis, while one person said Cora was a ‘Lucky girl!’

‘Wholesome Harrelson,’ one person wrote, while another joked: ‘If I were the dad I would be asking questions!’

Danielle later spoke to US outlet Today where she said she never noticed Cora’s resemblance to the actor until her friend pointed it out – ‘Then once we took that photo of her laughing it was undeniable.’

She said she and her partner were ‘so touched’ by Woody’s response, saying if you’re going to have a celebrity doppelganger Woody was ‘a great lookalike to have.’

Is Mr Burns the new Rachel Green? (Picture: Fox) A boy who let his mum cut his hair is the talk of TikTok after the result left him looking like The Simpsons villain Mr. Burns. The resemblance is genuinely uncanny. Nathaniel Glenn, 12, actually asked his mum Johanna for a trim inspired by evil wizard […]

Keith Allen has recalled some, dare we say, wild memories (Picture: David M. Benett/Dave Benett/Getty Images for D’Stassi Art) After his daughter Lily Allen previous claimed he had a ‘cocaine-induced heart attack’, actor Keith Allen has insisted he only takes the drug these days ‘for the right reasons’. This is the part in which we […]

The line-up is almost full! (Picture: BBC) EastEnders star James Bye has become the latest star to join the Strictly Come Dancing 2022 line-up, bringing the total number of celebrities so far to 14. ‘I’m not known for my shimmy or my twinkle toes – in fact my kids regularly laugh at my dad dancing […]