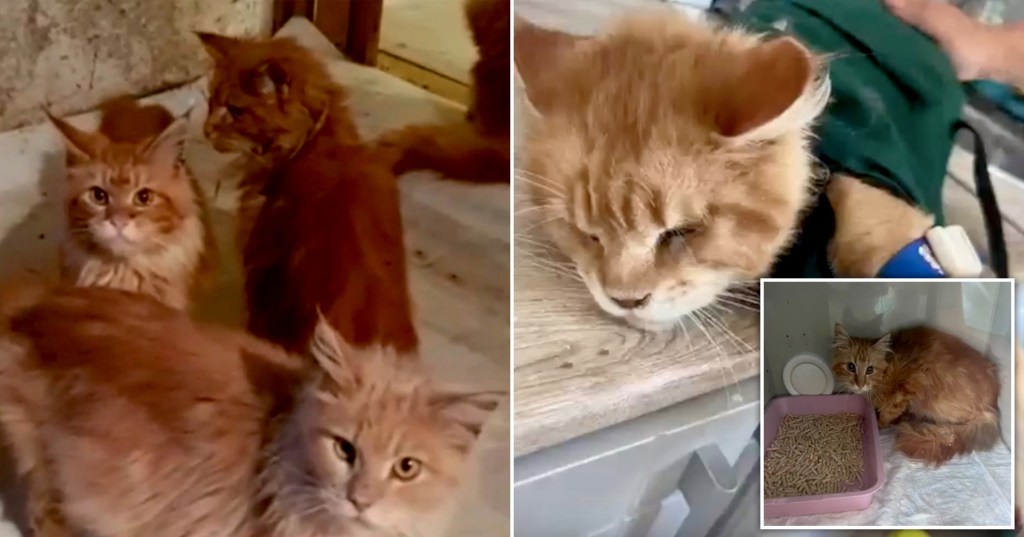 Police believe the woman had been dead for two weeks when they finally found her (Picture: Newsflash)

A cat breeder was found partially eaten by her 20 pedigree cats after collapsing at her home alone.

Police believe she had been dead for two weeks when they finally found her body surrounded by the animals.

The gruesome discovery was only made after an employee called the police in the Russian city of Bataysk when she was unable to contact the breeder.

An animal rescue expert who cared for some of the surviving giant Maine Coon cats said: ‘The cats were left alone on their own for two weeks.

‘There was no food, so what else to eat? It’s understandable right? They ate what there was.’

‘There was no food, so what else to eat? It’s understandable right?’ (Picture: @kotocafe_kotedzh/Newsflash)

The discovery was only made after neighbours complained of a putrid smell coming from the woman’s apartment (Picture: @kotocafe_kotedzh/Newsflash)

Maine Coon cats are noted for their large size and originated in the US state of Maine.

It is an extremely popular breed which is currently number three on the world pet cat popularity list – compiled by the Cat Fanciers’ Association (CFA).

Maine Coon cats are known for their passive nature often referred to as ‘the gentle giant’.

All over the world there have been cases of cats eating their owners after they died at home.

It may sound grim, but can you blame them if they’ve suddenly been left to fend for themselves with limited food available?

In May last year, a Colombian woman was found ‘devoured from the waist up’ after dying alone in her Madrid apartment.

She was gnawed by at least five of her seven cats and was discovered after neighbours complained of the stench coming from her flat.

Some of the healthier cats were sold on to other homes for just £29 each (Picture: @kotocafe_kotedzh/Newsflash)

Experts slam man who claims to have built a 1.4million-strong ‘frog army’

In 2013, a woman’s three ginger tabby cats ate entire parts of her body after she died at home.

An American man in his early thirties who took his own life was found three days later with his head, neck and part of his arm stripped to the bone, says the American Journal of Forensic Medicine & Pathology.

His 10 cats ended up dying of poisoning after eating him, as the man was believed to have overdosed on prescription medicine.

In 2020, two cats broke into Colorado Mesa University’s Forensic Investigation Research Station and nibbled two bodies that had been donated for medical research.

‘Ableism is rife’: Disabled students are being let down by universities

Under the Equality Act universities have a legal duty to remove barriers faced in education due to disability (Picture: Getty/Metro.co.uk) Every student deserves the right to accessible and fair higher education, but not all students receive it.  A survey of disabled students across the UK found that only 23% had received the support they needed […]