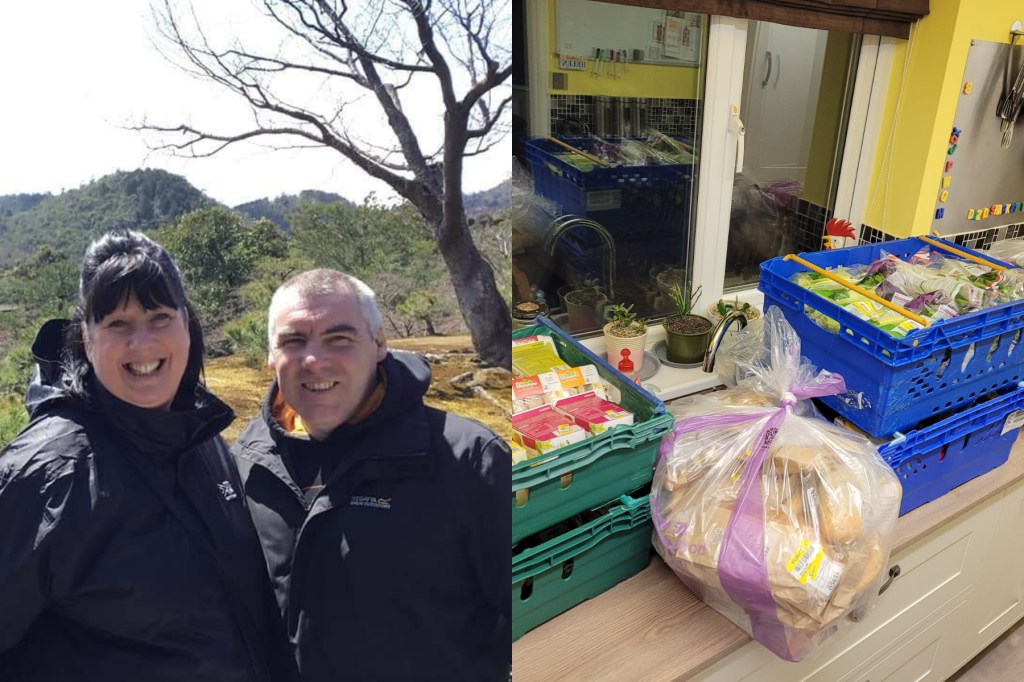 She even makes her own butter (Picture: Helen Morrison)

A savvy saver has slashed her weekly shops by £50, spending as little as £4 a week on her grocery shopping.

Helen Morrison, 55 from Newcastle-upon-Tyne, started cutting down her food costs and waste after she quit her job as a wedding planner in November 2021 for a better work-life balance.

Using a free sharing app, OLIO, along with switching from mainstream supermarkets to community grocery stores, Helen, who also lives with her husband Darren, 56, became a whizz in the kitchen, concocting fabulous feasts out of free food.

Alongside cutting down food waste, Helen has cut her weekly shop for two by £50, now only spending as little as £4 a week to top up her cupboard items.

Helen, pictured her with her husband Darren, started cutting her food spending down in November 2021 (Picture: PA Real Life)

‘Normal people go to the supermarket in the day and buy their shopping.

‘Instead, I sit on the app from about half past eight at night waiting for the food. I would say that 75 per cent of our food is from OLIO.’

Originally a wedding planner, Helen left her job in the hope of finding a better work-life balance; however, due to the switch she was forced to re-evaluate her spending.

‘At 55 I decided it was time to take an easier job in life,’ said Helen.

‘I worked as a wedding planner. It was a fabulous job but it was seven days a week and there was no life balance at all.

‘I had to re-evaluate my life, however that meant less money coming into the household.

As a food waste hero, Helen collects surplus food and distributes it to collectors as well as collecting for herself (Picture: PA Real Life)

‘So, I started researching tips on how to save money and somebody mentioned OLIO.

‘By January I was so impressed I decided to become a food waste hero myself. I now have regular collectors and I love doing it.’

Shocked at the amount of leftover food from her collections, Helen started planning ingenious ways to keep groceries from going in the bin.

‘I collect on my way home from work,’ she said.

‘I make a plan of everything we have and how I’m going to use it.

‘Vegetables are prepped and bagged and frozen. I make my own soups and freeze portions using one a day for our lunches at work.

‘I make my own sauces for pasta as tomatoes are often not requested on OLIO. I simply add in some of my frozen herbs to give them flavour.

‘Any herbs collected are blitzed in the food mixer and frozen in ice cube trays with a bit of oil for future use.

To view this video please enable JavaScript, and consider upgrading to a web browser that supports HTML5 video Tyler West has responded to the dig Craig Revel Horwood made about his hip movements on Strictly Come Dancing, admitting he doesn’t believe it was a ‘necessary’ jab for the judge to make. On Saturday night’s show, […]