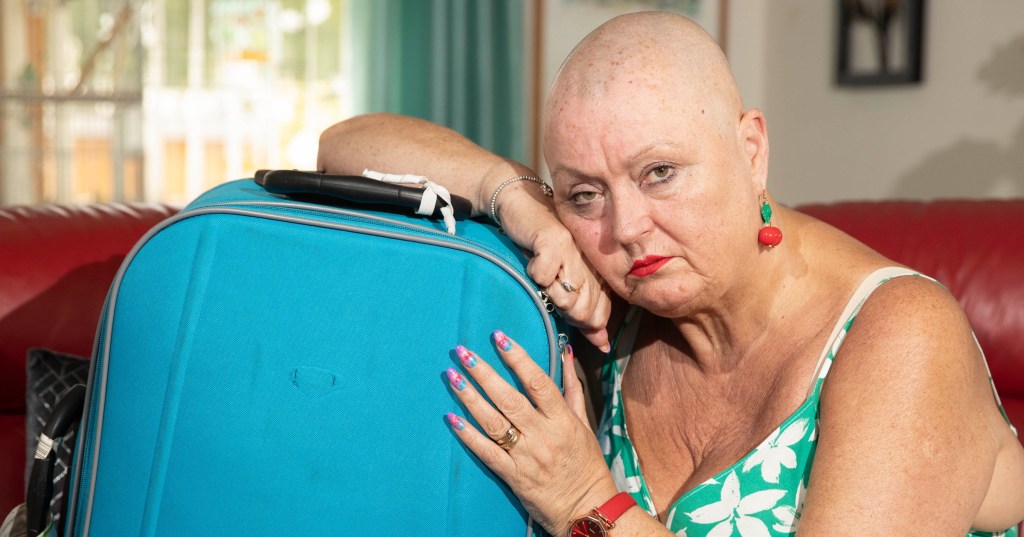 Teresa Bruce slept at the airport and had to get home via Edinburgh (Picture: Mirrorpix)

A holidaymaker has hit out at Ryanair for refusing to let her fly when her hand luggage was ‘too big’.

Teresa Bruce, 63, managed to get to Benidorm without any problems but while queuing for the return flight to Prestwick she was stopped by staff.

They told her she would have to pay €69 to put the suitcase in the hold, but after her five-day break with friends she was broke and couldn’t afford the fee.

Teresa said she had to get home to take her diabetes medication but instead had to be escorted back through security and slept at the airport.

She said: ‘It was scary and I was frightened to shut my eyes in the airport as I didn’t know who was going to be about and I was alone.

‘I tried to find somewhere in the airport safe and I dozed on and off on the seats.

‘To think Ryanair left a female in a foreign country on her own is absolutely shocking.’

Teresa phone a friend who wired her some money to pay the baggage fee, but by the time the cash arrived it was too late as the gate had closed.

Teresa said: ‘There were people still waiting to go on the stairs to get to the plane. If someone was running late they would have called out after that point and let them board.

‘The flight attendant was determined I wasn’t getting on that plane.’

It was at this point that she was escorted back through security. She then had to pay for a flight to Edinburgh the following evening because there were no more flights to Prestwick for another three days.

A spokesperson for Ryanair said: “This passenger’s cabin bag exceeded the dimensions permitted for her flight from Alicante to Prestwick (26 May).

‘As per Ryanair’s T&Cs which were accepted by the passenger at the time of booking, oversized cabin baggage must be placed in the hold of the aircraft for a standard fee.

‘This passenger initially refused to pay the charge, but later changed her mind and returned to the gate, however boarding for the flight had subsequently closed, and the passenger missed her flight.’

Emma and Jamie have worked alongside one another for years (Picture: BBC) EastEnders star Emma Barton has wished Jamie Borthwick the ‘happiest of birthdays’ with an incredible throwback snap on social media. The actress, who plays Honey Mitchell in the BBC One soap, posted the vintage picture, which sees her with a younger Jay Brown […]

Aiden Aslin was sentenced alongside Shaun Pinner and Saaudun Brahim (Picture: AP Photo) Time could be ‘running out’ to save a captured British fighter in Ukraine from execution. Aiden Aslin, 28, had been fighting in Mariupol when his military unit ran out of food and ammunition. They were left with ‘no choice’ but to surrender […]

Marlon’s amused when Laurel attempts to flirt with Kit (Picture: ITV) Laurel Thomas (Charlotte Bellamy) has recently been telling people that she’s ready to move on following the breakdown of her relationship with Jai (Chris Bisson) in Emmerdale. She had some flirty moments with a man she met in the bar she went to with […]