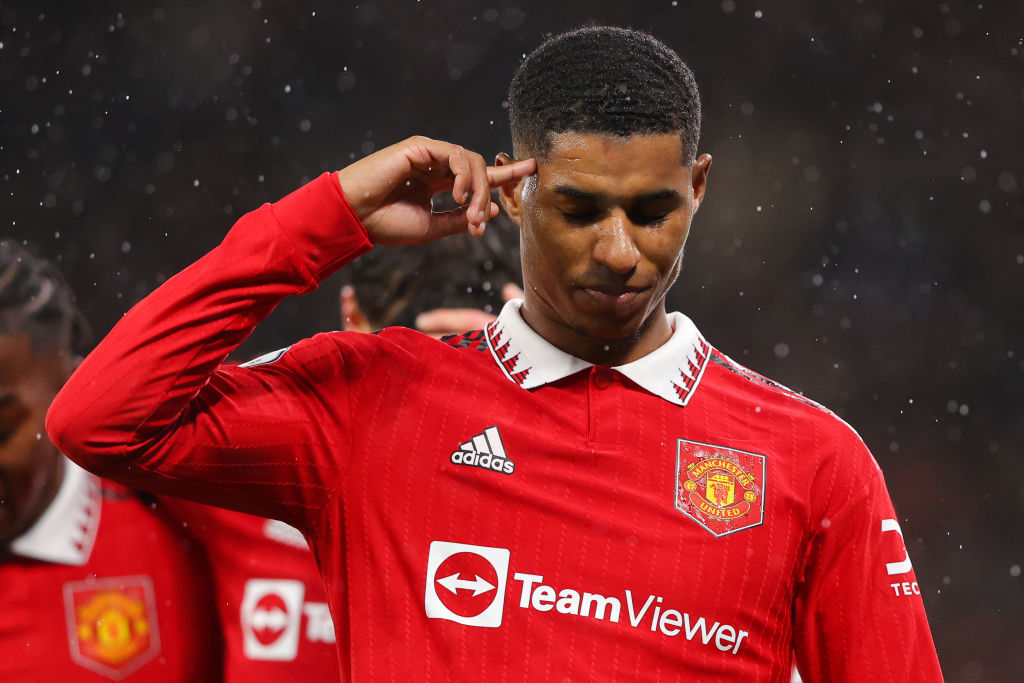 Rashford has been back to his best this season (Picture: James Gill – Danehouse/Getty Images)

Marcus Rashford has found his shooting boots once again and is in a fine run of form for Manchester United this season.

The academy graduate has scored 17 goals in all competitions this term and looks to be back to his very best following a sustained dip in form over the last couple of years.

Rashford, 25, also starred at the World Cup for England in Qatar, scoring three goals as the Three Lions reached the quarter-final stage in the Middle East.

And Rashford’s goalscoring exploits haven’t been the only thing drawing attention in recent weeks – his new goal celebration has also been the talk amongst the Old Trafford faithful.

So, why exactly does Rashford point to his head after scoring a goal for Manchester United? Here is his new celebration explained.

What does Marcus Rashford’s celebration mean?

Rashford explained back in October that he had been struggling with his mental health last season.

The England international has been enjoying himself in front of goal (Picture: James Gill – Danehouse/Getty Images)

It has been suggested that the celebration, which sees him raise his hand to his temple and sometimes close his eyes, could be a nod to his recent struggles and the clearer headspace he now finds himself in.

Rashford told Sky Sports earlier in the season: ‘It’s a completely different energy around the club and the training ground.

‘That puts me in a better headspace and I just feel really motivated now. That’s the area I was struggling in.

‘I was struggling at times with more mental things. It wasn’t really my own performance but other things off the pitch. That’s the biggest difference from last season.

‘I get that it’s your job to speak about what happens on the pitch but for the players we have to get into the right headspace for every game.

‘Too often last season, I wasn’t in the right headspace for games. I wasn’t surprised by some of the stuff that was happening.’

Rashford’s England teammate Bukayo Saka also pointed to his head after scoring for Arsenal against Manchester United on January 22, but the reason behind the celebration – and the possible link to Rashford – remains unclear.

MORE : ‘I don’t like what I’m seeing!’ – Marcus Rashford slammed by Paul Parker who aims dig at striker’s dribbling skills

Smith wins in Manchester Liam Smith has secured a knockout victory over Chris Eubank Jr in their Manchester grudge match. After a bad-tempered build-up between the two were personal insults were exchanged at will, the Liverpudlian settled their score with a an emphatic x round finish. 34-year-old Smith, a former light-middleweight champion, is well positioned […]

It will also feature an ITV shop, café and cinema (Picture: ITV) ITV has announced the completion of the first ever purpose built, public facing building, which features on-going development of the longest-running soap, Coronation Street. The Coronation Street Visitor Centre and Event Space is now the entrance to the soap’s tour, which sees members […]

Marcus Rashford has scored 17 goals so far this season for Man Utd (Photo: Getty) Erik ten Hag is hopeful that Marcus Rashford will sign a new long-term contract with Manchester United so he can ‘construct the best team in the world’. Rashford is a player reborn this season, with 17 goals and six assists […]