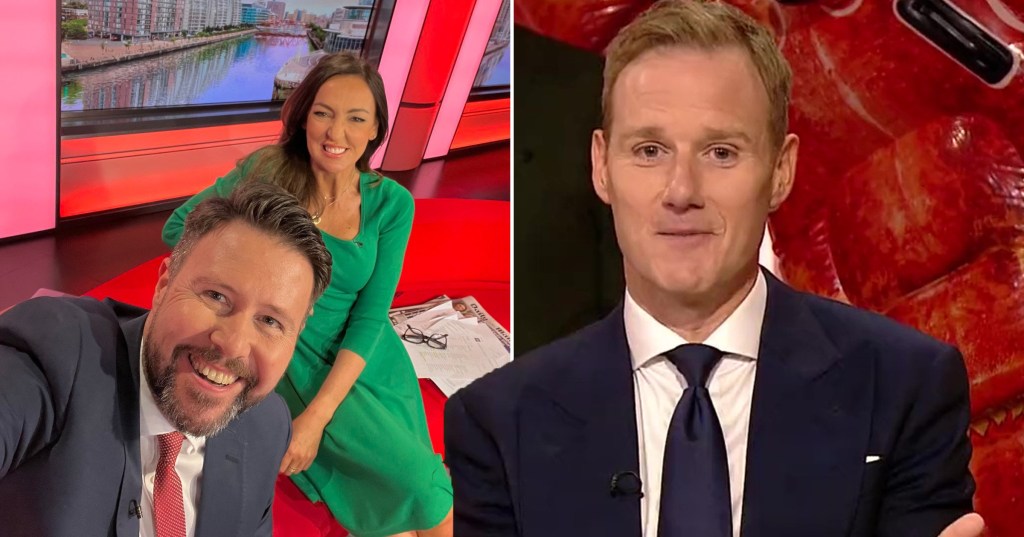 After Dan Walker bid farewell to BBC Breakfast last month, many have questioned who will be stepping in as his replacement.

The 45-year-old presenter confirmed he was leaving the flagship programme on April 4 – revealing he’s off to Channel 5.

In a statement, he said: ‘I can’t wait to get stuck into the daily news show, but I am also excited about making some great new TV for Channel 5.

‘I love their ideas and creativity and it’s rare to get an opportunity like this where paths and ambitions meet. The chance to do something different was too good to turn down.’

Dan has been on BBC Breakfast since 2016, and added in a Twitter video that the decision to leave was a ‘massive’ one.

Although there were several famous faces tipped to take over his role alongside Sally Nugent – a correspondent has been filling in for the presenter.

Who is Jon Kay on BBC Breakfast?

Jon, 52, has been stepping in for Dan since he moved over to Channel 5.

The correspondent joined the BBC in 1993, in recent years he has covered the 2012 Olympics and has also worked as a foreign reporter in Los Angeles.

Thank you for all your lovely comments about @BBCBreakfast today.
Itâs great having your company pic.twitter.com/kB3WlaVO85

After graduating from Exeter University in 1992, he joined the broadcaster as a trainee local reporter, where he worked at local radio stations.

He later got a full-time job at BBC Bristol.

Jon was born in Hull and has three children with Francesca Kasteliz, a former BBC News journalist.

Jon has been filling in for Dan, but hasn’t confirmed whether the transition has become permanent.

However, considering the presenter has covered for the hosts Dan and Charlie Stayt in the past, the odds could be in his favour.

Last month his odds were 1/3 on Ladbrokes, while William Hill had him as a favourite too at 2/5.

See you next Monday at 5, on 5 ðð»ðº@ClaudiaLizaTV @channel5_tv @5_News pic.twitter.com/IcjH3dZcQW

On his final show, Dan was joined by former BBC Breakfast colleague Louise Minchin, as well as his Strictly Come Dancing professional partner Nadiya Bychkova calling in to wave him off this week.

Toyah loses focus (Picture: ITV) As Toyah (Georgia Taylor) awaits being on trial for the murder of husband Imran (Charlie De Melo) on Coronation Street you’d think she’d want to keep her nose clean – but instead she finds herself getting involved in some environmental activism. In an effort to distract herself from her current […]

Charlie was initially fuming about Sami joining the adult subscription-based service (Picture: Getty Images/instagram) Charlie Sheen has had a surprising change of heart about his daughter Sami opening an OnlyFans account, just days after fuming about her decision.  The Two and a Half Men actor made it clear he did not support Sami, 18, joining […]

Where is Rwanda and why are asylum seekers going to be sent there?

Kigali, with a population of more than one million (2012), is the capital and largest city of Rwanda (Picture: Getty Images) The government has announced controversial multimillion-pound plans for asylum seekers who cross the Channel in small boats to be flown 4000 miles away for processing in Rwanda. Home Secretary Priti Patel proposed the plan during […]