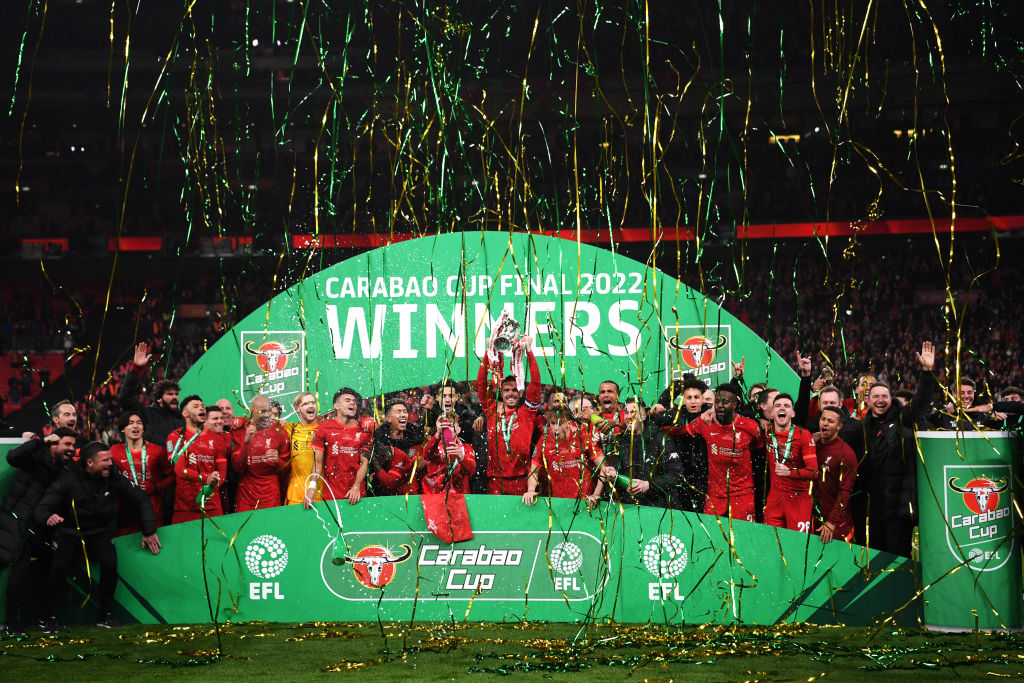 The Carabao Cup is the first final of the year (Picture: Shaun Botterill/Getty Images)

The Carabao Cup has reached the semi-final stage with Southampton, Newcastle United, Nottingham Forest and Manchester United just two games away from a spot in the final.

The competition represents the first opportunity to win domestic silverware this season, with all four sides desperate to add the title to their existing trophy collections.

But when exactly is the Carabao Cup final and what TV channel will it be shown on?

Here is everything you need to know.

When is the Carabao Cup final?

The Carabao Cup final 2023 will take place on Sunday, February 26 at Wembley Stadium.

Last year’s final kicked-off at 4.30pm, but the exact start time for the 2023 final has yet to be confirmed.

Four teams can still get their hands on the trophy (Picture: Michael Regan/Getty Images)

What TV channel with the Carabao Cup final be on?

The final will be shown live on Sky Sports Main Event and Sky Sports football.

Sky customers will be able to live stream the game on the Sky Sports website and with the Sky Go app.

Who won the final last year?

The game finished 0-0 after extra-time, with the Reds prevailing 11-10 in a dramatic penalty shootout.

After all ten outfield players had scored their penalties, Chelsea goalkeeper Kepa Arrizabalaga blazed his spot kick over the bar, before Liverpool keeper Caoimhin Kelleher slotted home his penalty to take the trophy back to Merseyside.

It was the ninth time Liverpool had won the League Cup in their history – and their first since the 2011/12 season.

Which team has won the most EFL Cups?

Liverpool’s nine titles makes them the most successful team in the history of the EFL Cup.

Manchester City have won the League Cup eight times, whilst Aston Villa, Manchester United and Chelsea have all won the trophy on five occasions.

Tottenham, Nottingham Forest, Leicester, Arsenal, Norwich, Birmingham and Wolves are the only other teams to have won the competition more than once since it was created in 1960/61.

Dean Daughtry, co-founder of band Atlanta Rhythm Section and co-writer of hit So in to You, dies aged 76

House blown up in explosion ‘like a scene from the Blitz’

The entire upper floor of the property in Goole was blown up (Picture: Ben Lack) This is the aftermath of a suspected gas explosion in East Yorkshire that has left a man homeless. Footage shows the devastation in the port town of Goole, which was likened to ‘a scene from the Blitz’. Families were forced […]