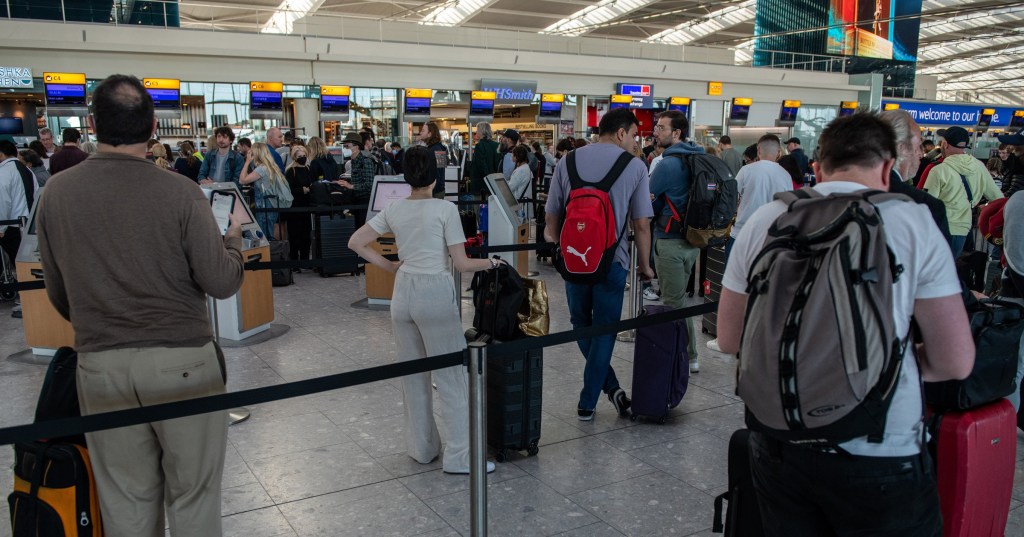 Travellers have faced months of disruption (Bloomberg via Getty)

Holidaymakers have been hit with months of travel chaos, with a wave of cancelled flights leaving many families thousands of pounds out of pocket.

Demand has surged back to pre-Covid levels but airlines have suffered staff shortages after letting huge numbers go during the pandemic.

As a result, airports have scrapped hundreds of flights during the busy summer period.

Airlines have now been urged to review their summer timetables to ensure they are ‘deliverable’.

Here is what you need to know if you are flying abroad this summer.

– What should I do if my flight is cancelled?

The airline has a duty to its passengers to put them on to another flight. The airline could see if there are flights available later that day.

Paul Charles, chief executive of travel consultancy the PC Agency which advises airlines around the world, said: ‘If you are contacted, it is the duty of the airline to put you on to another flight that day to the same destination – whether it is with the same airline or a different firm.’

Another option could be to fly out the next day or on subsequent days, but ‘a lot of people are frustrated by that and may choose to cancel’, according to Mr Charles.

– Should I be thinking about trying to get a refund or compensation?

If a UK or EU-based airline changes your flight or its time, you have a right to a refund or compensation.

Mr Charles described the rules around this as ‘quite complex’.

He said an airline may be able to claim the delay was outside of their control and they are not liable to provide compensation.

Mr Charles added: ‘If a flight is cancelled more than two weeks before your departure date, then you are not entitled to compensation.

‘If it is cancelled a week or even 24 hours before, then you are entitled to compensation.’

Many of the changes to the proposed Gatwick flights are for trips that are due to depart in the July and August summer rush.

Mr Charles said: ‘Many people would be given a refund or the chance of a flight at a later date. If you are travelling over the summer you now need to be on alert for whether there might be any changes to your plans.’

– How can passengers prepare so they are not left out of pocket by changes to trips?

Shopping around for travel insurance will provide a back-up that may recover the costs of cancellations rather than having to chase an airline.

Mr Charles said it is ‘wise’ to have the right travel insurance for your needs because there may be costs linked with cancellations for which the airlines will not give compensation.

For example, if you make a separate booking – perhaps for a hotel, hire car, attractions or for …read more

Lewis Hamilton struggled with severe back pain at the Azerbaijan Grand Prix. (Photo by Bryn Lennon – Formula 1/Formula 1 via Getty Images) Lewis Hamilton has been labelled a ‘pantomime dame’ by former Formula 1 race winner John Watson, who says that the seven-time world champion should ‘spend more time in the gym’ in order […]

Edu with Arsenal’s new signing Fabio Vieira (Getty) Edu says he is ‘very excited’ for Arsenal’s transfer window after the club completed a £34 million deal for Fabio Vieira. The 22-year-old midfielder joined from Porto on Tuesday, while the Gunners continue to push for Manchester City forward Gabriel Jesus and Leicester City’s Youri Tielemans. And […]

Alison Hammond in tears as Black woman performs leading role in My Fair Lady: ‘It’s such a gift’

To view this video please enable JavaScript, and consider upgrading to a web browser that supports HTML5 video Alison Hammond was left in tears as she praised the ‘gift’ of representation after watching a Black woman perform an iconic track from musical My Fair Lady. At just 25 years old, Amara Okereke has already starred […]