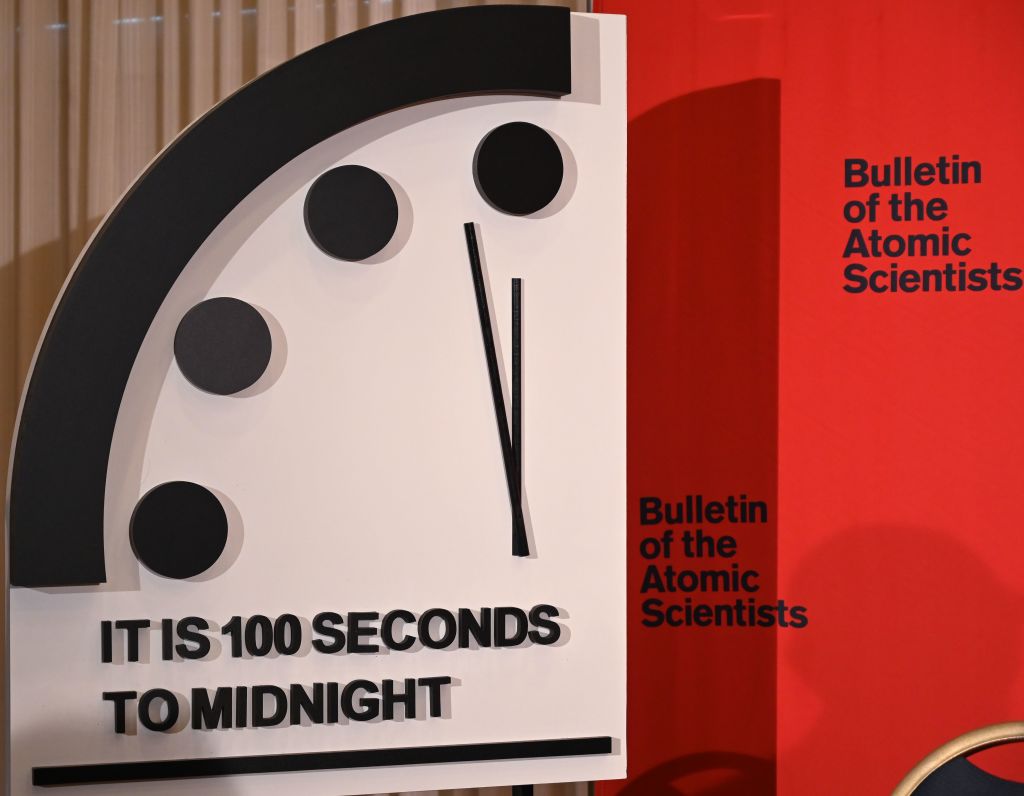 Will the Doomsday Clock stay at 100 seconds to midnight? (Picture: Getty Images)

How close are we to the end of the Earth?

That was the small matter up for debate every year when scientists determine the time on the Doomsday Clock.

The past few years have seen the world facing some huge challenges, with most of 2022 dominated by the Ukraine war, and fears of escalation into a wider – or even nuclear – conflict.

Recent times have also seen us facing the unprecedented challenge of the Covid pandemic, which continues to cause chaos in many parts of the world as new variants appear, causing case numbers in some countries to spike all over again.

The 2023 time is due to be set – but just what is the Doomsday Clock, and what time is it currently at?

What is the Doomsday Clock?

The Doomsday Clock was designed to represent how high the threat is of a global catastrophe.

Since its inception in 1947, the Doomsday Clock has warned humanity how close the world is to catastrophe every year, with midnight being the time of the apocalypse.

Where will the Doomsday Clock land this year? (Picture: PA)

The idea was first introduced in the first magazine edition of the Bulletin which was published in June 1947.

The inspiration behind the idea of the Doomsday Clock was the growing threat of nuclear weapons following the Second World War, particularly with the growing tensions between the Soviet Union and the United States.

The Doomsday Clock works by judging how near the minute hand is to midnight – simply put – the nearer it is, the closer the Earth is to disaster.

The position of the minute hand is measured on the threat of nuclear attacks, climate change, cyber warfare and bioterrorism – anything that brings the end of the world a little closer.

Members of the Bulletin of Atomic Scientists unveil the changes made on the Doomsday Clock (Picture: Getty)

What time is the Doomsday Clock at?

In recent times the Doomsday Clock has been set at 100 seconds to midnight – making it the closest to armageddon it has ever been.

The Clock has moved closer to midnight in three of the last four years prior to 2022. While it did not move in 2019, its minute hand was set forward in 2018 by 30 seconds, to two minutes before midnight

Who controls the Doomsday Clock?

The Doomsday Clock is set once a year by the Bulletin of the Atomic Scientists.

In the beginning, Manhattan Project scientist and Bulletin editor Eugene Rabinowitch decided when, and how much, to move …read more

Three-time Strictly finalist Gorka Márquez (Picture: Getty/Metro.co.uk) Strictly Come Dancing’s Gorka Márquez on his new show, his growing family with Gemma Atkinson, and wanting to hang out with David Beckham. Is everything ready for your new show? Yeah, almost there. We start rehearsals soon. We’re doing finishing touches. There are new dances but it’s not […]

Arsenal signed Jorginho from Chelsea on transfer deadline day (Pictures: Getty) Jorginho’s deadline-day move to Arsenal has gone down ‘very well’ with the Gunners squad, who believe the former Chelsea midfielder can contribute to their Premier League title push. Italy international Jorginho moved to the Premier League leaders on deadline day in a deal worth […]

Ali Price didn’t make it in the Scotland line-up (Picture: Ross MacDonald/SNS Group) Gregor Townsend has picked London Irish scrum-half Ben White ahead of the vastly more experienced Ali Price in his starting line-up to face England at Twickenham in the opening game of the Six Nations tomorrow. Scotland’s regular No.9 Price has not even […]