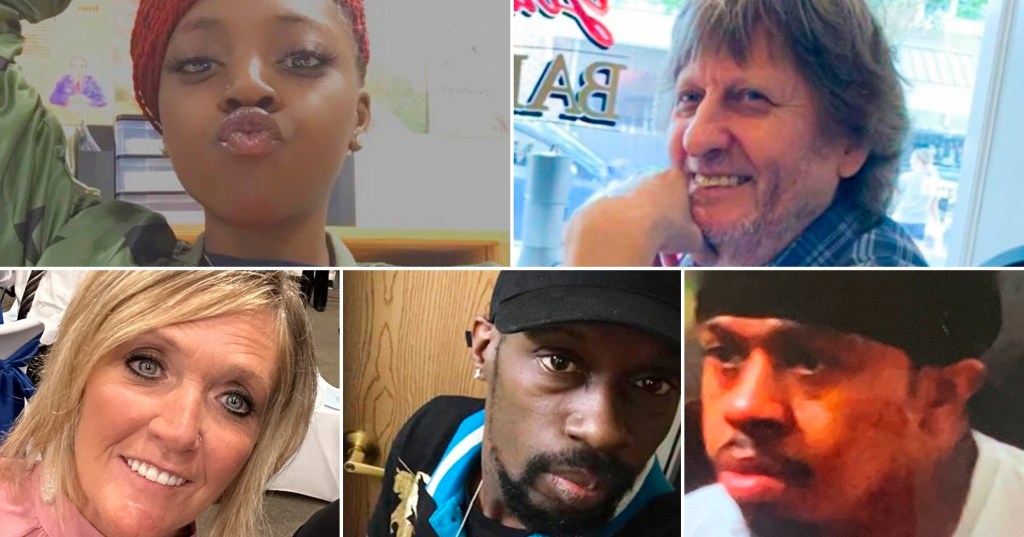 Five victims of the Walmart shooting have been pictured and the sixth was a 16-year-old-boy (Pictures: AP)

Six people who were shot dead at a Walmart have all been identified as workers at the store, including a 16-year-old boy.

The city of Chesapeake, Virginia, where a gunman opened fire in a Walmart where he worked as an overnight manager, released the identities of the victims of the Tuesday night massacre.

‘We are saddened to announce the names of those we lost on Tuesday evening: Lorenzo Gamble, Brian Pendleton, Kellie Pyle, Randall Blevins, and Tyneka Johnson,’ tweeted the city on Wednesday evening.

‘The sixth victim is a 16-yo male whose name/photo are being withheld at the time due to him being a minor.’

We are saddened to announce the names of those we lost on Tuesday evening: Lorenzo Gamble, Brian Pendleton, Kellie Pyle, Randall Blevins, and Tyneka Johnson. (1/2)

A Walmart spokesperson confirmed that all the victims were employed by the company.

Gamble, 43, worked at Walmart for 15 years and loved being with his two sons, including supporting his 19-year-old at his football games. Gamble’s 10-year-old son wanted to spend more time with his father and would cry when he wasn’t home, Gamble’s mother Linda told The Washington Post.

‘He just kept to himself and did his job,’ she said. ‘He was the quiet one of the family.’

Pyle, 52, had recently moved back to her hometown of Norfolk and gotten in contact with her high school sweetheart after going through a divorce. She took a job at Walmart as part of her new life. The mother of two with a two-year-old granddaughter was looking forward to the holidays with her family.

‘It was going to be her first Thanksgiving here,’ her cousin Billy Pillar-Gibson told The Post.

Pendleton, 39, was scheduled to work at Walmart on Thursday after having Thanksgiving dinner, according to his mother Michelle Johnson. He had worked at the store for more than a decade despite having a brain condition, congenital hydrocephalus.

Blevins worked at Walmart for more than two decades and love the job and his family, according to his cousin Virgil Wimmer.

‘There wasn’t any way anybody could have had a grudge against him,’ said Wimmer said. ‘He’s the last one you’d expect something like this to happen to. There is absolutely nothing bad I could say about him, even if he was living.’

Tyneka Johnson had high academic goals and was willing to help younger students at the center she received tutoring from Casheba Cannon. She was a fashionista with an infectious personality and loved dancing and music.

‘She was that kid. When she came to tutoring, she was very well put together,’ Cannon …read more

What Christmas essentials and staples can be kept in the cupboard weeks in advance? (Picture: Getty) Christmas is almost here, which means it’s time to prep for a festive meal! Given how quickly December 25 will roll around, many will want to get organised and stock up on food sooner rather than later. There are […]

Ashton Kutcher breaks down in tears over moment his twin brother Michael nearly died: ‘Everything is not ok’

James Maddison and Harry Kane both took part in Monday’s session (Pictures: PA / Getty) England have an almost fully fit squad to choose from for Tuesday’s World Cup showdown against Wales with only Arsenal defender Ben White missing the final training session. Gareth Southgate’s side will progress to the knockout stages of the tournament […]