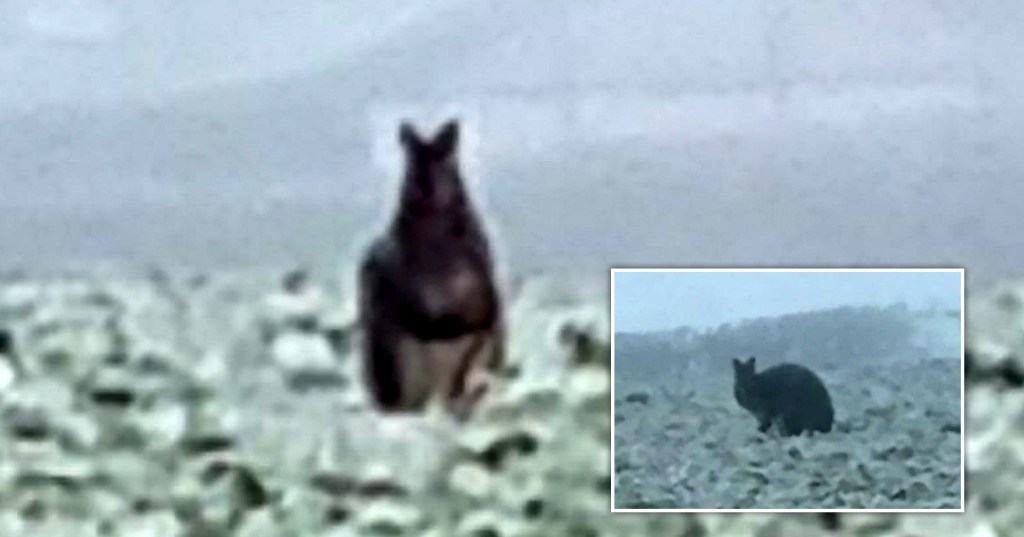 People in Sheffield, South Yorkshire, were left baffled after several sightings of the animal across the city (Picture: SWNS)

A ‘wild’ wallaby usually seen in Australia has been spotted casually hopping through a field in the north of England.

People in Sheffield, South Yorkshire, were left baffled after several sightings of the animal across the city over the weekend.

James Ledger, who was walking his dog in the Mosborough area when he saw the wallaby, said it was ‘just crazy’.

‘I could just see it straight on and at first I thought it was a hare,’ the 40-year-old said.

‘But then as I got a little bit closer to it, it just started hopping off.

‘I’ve just never had that experience before where I couldn’t just believe what I was seeing.’

He took the pictures of the wallaby as the temperatures dropped below zero – a far cry from the animal’s roots in the outback, which sees temperatures of up to 45ºC at this time of year in the country’s summer.

James added: ‘Quite a few stags and deer have been spotted around the fields where I live so I go out quite a lot with my dog to try and see one, because I’ve never seen one.

It was pictured when the temperatures were below zero – a far cry from the animal’s roots in the outback (Picture: SWNS)

Are you a bit cold, mate? (Picture: SWNS)

‘That’s what I was looking for really, to get a glance of a deer or a stag but then I never, ever expected to see a wallaby.’

Wallabies usually live in Australia and Papua New Guinea, but there are some populations in the UK.

There is thought to be a community in Buxton, Derbyshire, and around 1,740 in the country overall – both in the wild and in captivity.

Another wallaby caused chaos last year after escaping from his Lincolnshire estate.

But the seven-month-old animal was said to be having ‘far too much fun to be caught’.

He spent a mighty six weeks on the run until he was reunited with his pal Dec, also a wallaby.

Woman stole £500 worth of sex toys and condoms from Boots

The pop-country crossover queen spoke about her journey to embracing her body (Picture: Reuters) Music icon Shania Twain has declared that she won’t be getting plastic surgery after posing topless for the cover art of her new single and deciding to ‘forget the sag’. The country chart-topper revealed that it was something she had considered […]

Need a last-minute gift for the hosts? TikTok grandma has the perfect idea

A neat trick (Picture: Getty) Stuck for a last minute gift idea? This grandma has the perfect trick. If you’re going to someone’s house and are looking for something to spice up the bottle of wine you’re bringing, add a tea towel. Hear us out – it’s all in the presentation. A woman called Babs, […]