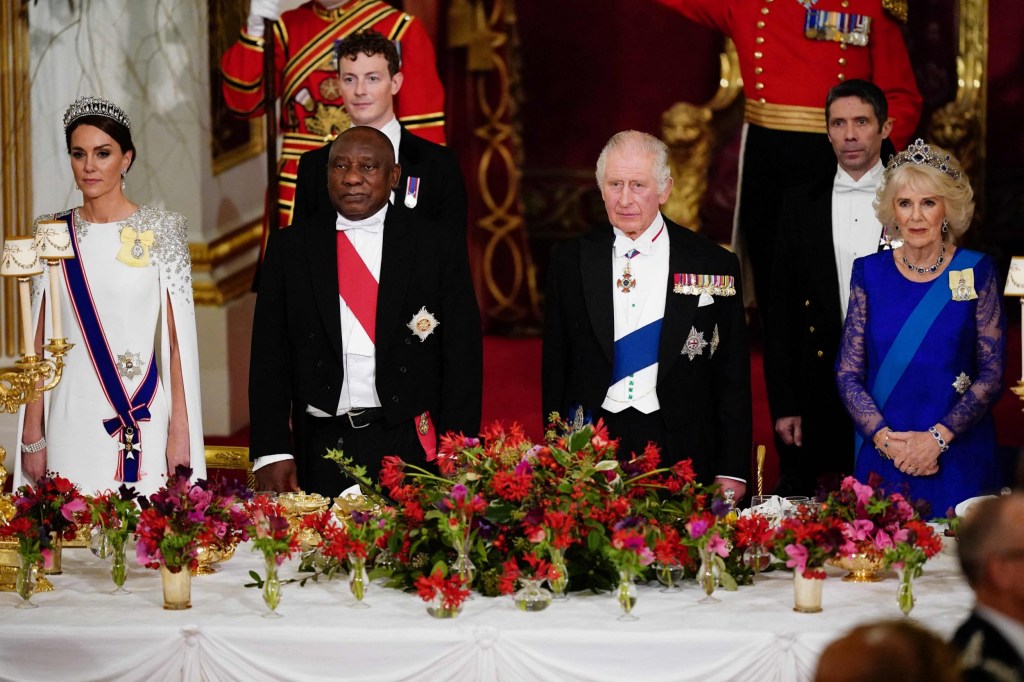 If you had been invited to the King’s first state banquet last night, you would have been offered a menu including pheasant hunted on his Windsor estate.

The mains were either grilled bill (a delicate flat fish), or pheasant, with a dessert of vanilla parfait with caramelised apples.

To go alongside, wines offered included £75 Taylor’s Vintage Port 1983, a Château Feytit-Clinet and a Pomerol 2000.

Guests made their way to Buckingham Palace for the luxurious event, put on in honour of South African President Cyril Ramaphosa’s state visit to the UK.

Naturally, the dinner was a very glam affair with the Princess of Wales wearing some of Elizabeth II’s jewels for the first state banquet in her new royal role.

Guests during the State Banquet at Buckingham Palace (Picture: Getty)

This was the first state banquet Charles hosted as King (Picture: AFP)

Some suggested that with millions facing a cost of living crisis and struggling to put food on the table, it wasn’t the right time for such an ostentatious display of wealth.

He added that growing the economy is the prize which matters – ‘whether it’s pheasant on the plate or pie and mash’.

Mr Stride told LBC: ‘Right at the heart, actually, of our soft power, as it’s often called, is this ability to project our sense of history and pageant.’

Asked about the timing, with people struggling with the cost of living, Mr Stride said: ‘I would see it in terms of engaging with our most important trading partner on the continent of Africa, with whom we have very important ties of history and trade and economics.

‘What really we want to come out of this is a stronger and healthier UK economy – and that benefits everybody.

‘I think, whether it’s pheasant on the plate or pie and mash, I think if that can be achieved, then that’s the biggest prize.’

The King paid tribute to the late Queen and her ties with South Africa as he hosted the nation’s president, saying she admired ‘its people, its vibrancy, natural beauty and diversity’.

The monarch also mentioned the sometimes troubled past relationship between the two nations that ‘provoke profound sorrow’, but said ‘we must acknowledge the wrongs which have shaped our past if we are to unlock the power of our common future’.

Zara McDermott admits 3 stone weight loss content was down to fan requests: ‘I was naive and governed by my audience’

Zara reflected on her previous Instagram content (Picture: BBC) Zara McDermott admitted that she documented her three stone weight loss journey because it was what her Instagram followers requested at the time. The TV personality, who rose to fame on the hit annual dating series Love Island showcased her impressive transformation on social media in […]

Chris Moyles stuffed up a question about music (ITV/Shutterstock) He might be known as a radio legend, but I’m A Celebrity…Get Me Out of Here! campmate Chris Moyles has managed to get a question about Adele wrong. On Wednesday night’s episode Matt Hancock and Mike Tindall managed to win the Dingo Dollar Challenge, but things […]