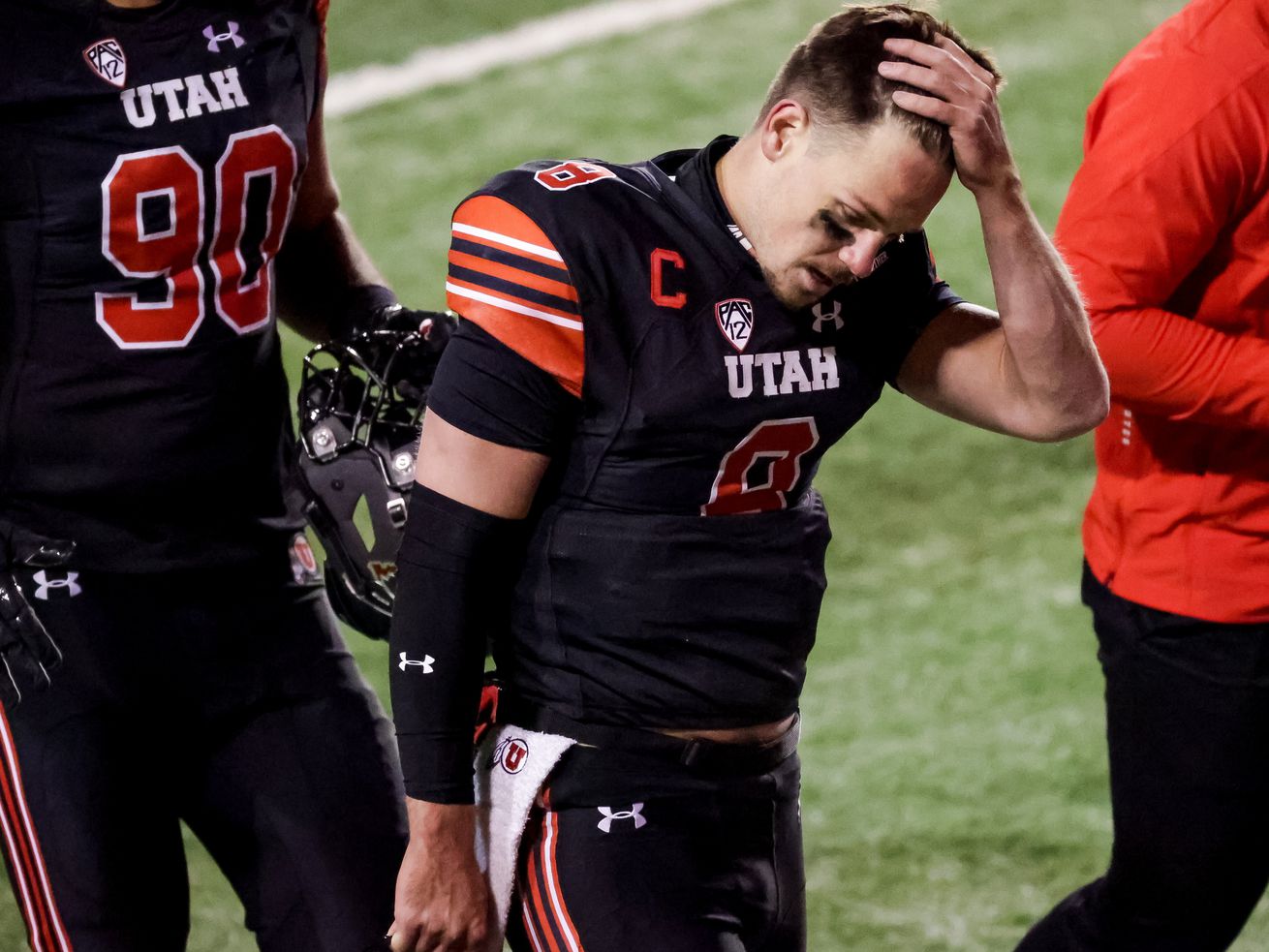 Utah Utes quarterback Jake Bentley (8) and his teammates leave the field after their loss to the USC Trojans at Rice-Eccles Stadium in Salt Lake City on Saturday, Nov. 21, 2020. | Spenser Heaps, Deseret News

SALT LAKE CITY — Utah’s game against No. 20 USC Saturday night kind of looked like what you might expect from a team playing its season opener, in late November, against a nationally ranked opponent that had already played, and won, two games.

Not only that, but the Utes were breaking in a new quarterback — who happened to get injured early in the second quarter — as well as rolling out a bunch of new defensive starters against an offense with a skilled, experienced quarterback and loaded with dynamic playmakers.

“Overall, a tough way to start the season. A disappointing game but there were a lot of positives in it, though.” — Utah coach Kyle Whittingham

On top of that, the Utes had been dealing with COVID-19 issues in recent weeks, forcing the cancellation of their first two games. Utah was the last FBS team to start its season during the 2020 pandemic.

Add it all up and, well, the Pac-12 South favorite Trojans patched together a 33-17 victory over the sloppy Utes, who coughed up five turnovers, in front of an empty Rice-Eccles Stadium.

“Overall, a tough way to start the season,” said Utah coach Kyle Whittingham. “A disappointing game but there were a lot of positives in it, though.”

It was somewhat surprising that USC didn’t win by a more lopsided margin. As much as Utah struggled at times, the Trojans struggled to put the Utes away.

Ultimately, though, Utah couldn’t make the plays on offense they needed.

Trailing 30-17 early in the fourth quarter, the Utes drove all the way to the USC 10-yard line but couldn’t convert on fourth-and-4, turning the ball over to the Trojans on downs.

That pretty much sealed Utah’s fate.

USC improved to 3-0 on the year while the Utes fell to 0-1. The loss snaps Utah’s streak of 13 consecutive wins in season openers.

“It was a big win for us and our season,” said USC coach Clay Helton. “The storyline tonight was our defense. I thought they played amazing the entire game, really giving up only 10 points.”

In the end, this much was clear — Utah has plenty to clean up, especially on the offensive side of the ball.

“I thought our run defense was solid. We gave up some things in the pass game,” Whittingham said. “We had some good performances by a lot of guys that hadn’t played much football for us, if any.”

Another bright spot was linebacker Nephi Sewell, who scored Utah’s first touchdown of the season on …read more

Summary List Placement Labor organizers in Southern California are pushing President-elect Joe Biden to pick a progressive, hometown hero for Labor Secretary, arguing that the state’s top labor official — an anti-sweatshop campaigner dubbed the “bane of the deadbeat employer” — is supremely qualified to protect workers’ rights during the pandemic. Julie Su has served […]

The home care industry is booming amid the pandemic. Here are the 4 startups raking in the most VC funding during a record-breaking year for the industry.

Summary List Placement The pandemic has ushered in a funding boom for in-home healthcare startups. According to Pitchbook data, funding for the industry’s startups reached an all-time high in 2020 with $228 million raised from 15 deals. And that’s with more than a month to go before the year closes out. This year’s total will […]

Summary List Placement Digital-only banks are redefining retail banking in major markets around the world. Spurred on by consumer frustrations with incumbents and growing willingness to use digital channels for accessing financial services, these tech-savvy players have acquired customers at pace and ramped up pressure on established firms. In the US, these challengers got off […]