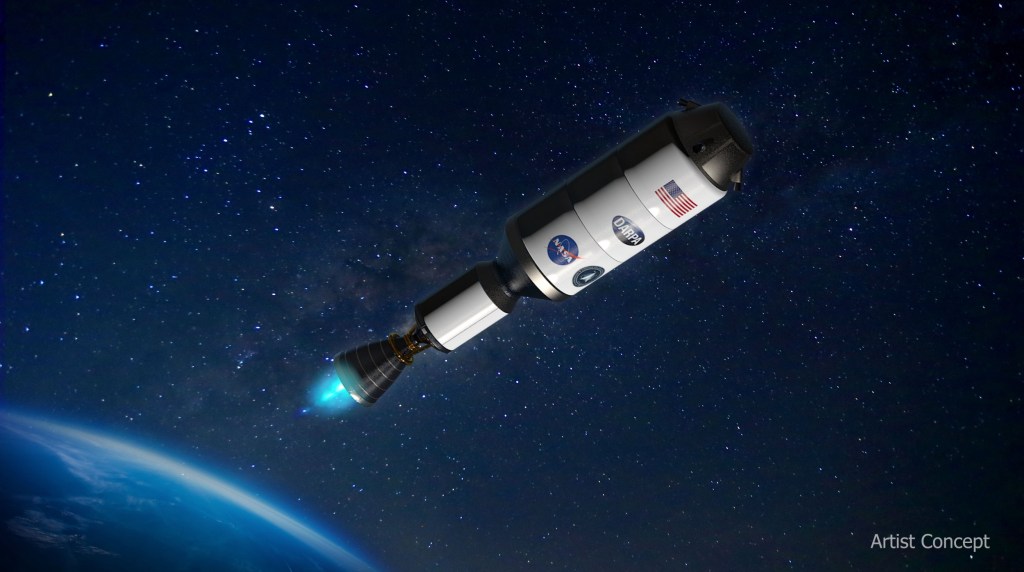 The space agency hopes to have the nuclear-powered rockets flying by 2027, officials said. The project is called the Demonstration Rocket for Agile Cislunar Operations, also known as DRACO.

The rockets are powered by thermal nuclear propulsion. In the engine, a nuclear fission reactor generates extreme heat, which is then transferred to a hydrogen propellent. The propellent expands and is exhausted out a nozzle behind the spacecraft, propelling it forward.

This process is estimated to be about three to four times as efficient as conventional chemical rockets.

Nasa Administrator Bill Nelson said the agency hopes to have the rockets flying as soon as 2027 (Picture: AFP)

‘With the help of this new technology, astronauts could journey to and from deep space faster than ever – a major capability to prepare for crewed missions to Mars,’ Nasa Administrator Bill Nelson said.

Nasa engineers now view nuclear powered rockets as crucial for the ‘Moon to Mars’ initiative, which is aims to eventually send humans to the planet.

‘If we have swifter trips for humans, they are safer trips’ Nasa Deputy Administrator Pam Melroy said.

To make the DRACO a reality, Nasa is partnering with the Defense Advanced Research Projects Agency (DARPA), the US government agency whose research eventually lead to innovations like weather satellites, GPS, and the internet.

‘DARPA and Nasa have a long history of fruitful collaboration in advancing technologies for our respective goals, from the Saturn V rocket that took humans to the Moon for the first time to robotic servicing and refueling of satellites,’ DARPA Director Dr Stefanie Tompkins said.

The last tests of nuclear fission-powered rockets occurred 50 years ago for the Nuclear Engine for Rocket Vehicle Application project, or NERVA. Nasa hasn’t tested a nuclear rocket since it shut down the program in 1973.

Bruno made a dazzling entrance for his first day (Picture: ITV) Bruno Tonioli is said to have been ‘told off’ after his first day as a new judge on Britain’s Got Talent, but the choreographer is absolutely ‘loving’ his new role. This week, it was officially confirmed that the former Strictly Come Dancing judge had […]

Eamonn Holmes has been on quite the health journey over the past few years (Picture: Getty) Eamonn Holmes has been through two years of health hell, but he’s revealed that someone quite unexpected helped him through it – Jo O’Meara from S Club 7. Speaking about his terrifying fall in October 2022, the 63-year-old opened […]

Bruno made his BGT debut! (Picture: ABC via Getty Images) Bruno Tonioli admitted being ’emotional and nervous’ as he made his grand entrance as a Britain’s Got Talent judge. The former Strictly Come Dancing judge was finally confirmed to have joined the judging panel alongside Simon Cowell, Amanda Holden and Alesha Dixon, after weeks of […]