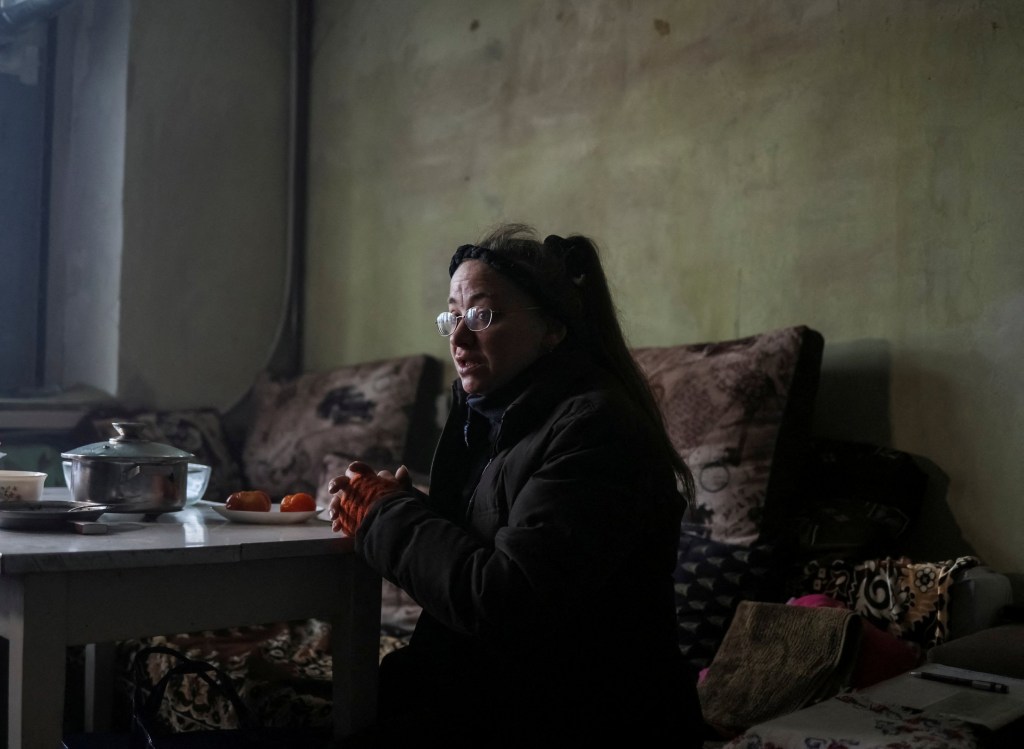 Tetiana Reznychenko huddles in her flat, which has no electricity, heating and water (Picture: Reuters)

Ukrainians have been warned to brace themselves for a ‘life-threatening’ winter after Russian artillery strikes left millions without power and hospitals unable to function properly.

President Volodymyr Zelensky used his nightly address to urge people to conserve energy, particularly in hard-hit areas such as Kyiv, Vinnytsia in the southwest, Sumy in the north and Odesa on the Black Sea.

Authorities have begun evacuating residents from recently liberated parts of Kherson and Mykolaiv, fearing the lack of heat, power and water will make living conditions too difficult.

Dr Hans Henri Kluge, the WHO’s regional director for Europe, said: ‘This winter will be life-threatening for millions of people in Ukraine.

‘Attacks on health and energy infrastructure mean hundreds of hospitals and healthcare facilities are no longer fully operational, lacking fuel, water and electricity.’

Sergey Kovalenko, the head of YASNO, which provides energy for Kyiv, said the daily rolling blackouts across the country are likely to last until at least March.

‘Stock up on warm clothes, blankets, think about options that will help you wait a long outage,’ he added. ‘It’s better to do it now than to be miserable.’

The elderly, women with children and those who are ill of disabled are being prioritised (Picture: Anadolu Agency via Getty Images)

Deputy Prime Minister Iryna Vereshchuk said people living in Kherson can apply to be moved to areas where security and heating issues are less severe.

In a Telegram message for residents – especially the elderly, women with children and those who are ill or disabled – she wrote that the government will provide transportation, accommodations and medical care for them.

The evacuations are taking place more than a week after Ukraine recaptured the city of Kherson, on the western bank of the Dnieper River, and surrounding areas in a major battlefield gain.

Since then, heading into the winter, residents and authorities alike are realizing how much power and other infrastructure the Russians damaged or destroyed before retreating.

Ukraine is known for its brutal winter weather, and snow has already covered Kyiv, the capital, and other parts of the country.

Kelsey Parker snaps after receiving message from Max George on Tom’s birthday: ‘What do you want me to say?’

…read more Source:: Metro        (Visited 1 times, 1 visits today)Kelsey Parker shares how ‘tough’ Christmas is going to be for her this year after death of husband Tom Parker To view this video please enable JavaScript, and consider upgrading to a web browser that supports HTML5 video Kelsey Parker has expressed how hard Christmas…Tom […]

It’s a rather… unexpected revelation (Picture: Disney/TikTok) A short clip from hit kids’ film Toy Story 3 has caused a massive stir online after a TikTok user claimed they could hear the film’s Ken doll using a distinctly non-Disney expletive. The 2010 Disney-Pixar flick introduced Barbie’s iconic boyfriend Ken (voiced by Michael Keaton) for the […]