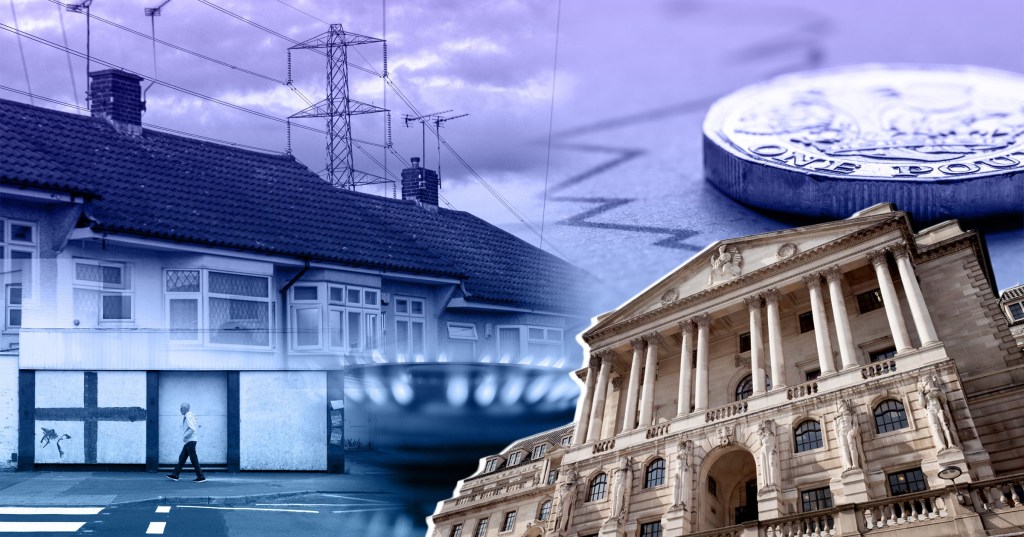 The economy will enter intro reverse growth in the second half of the year, a report has warned (Picture: Getty)

Yet another grim forecast has been issued for the UK economy as it teeters on the brink of recession.

A new report has warned Britain is set to see the return of stagflation, the condition which saw the country dubbed the ‘sick man of Europe’ in the 1970s.

A combination of slow growth, high unemployment and rising prices will continue to dent living standards and plunge more families into hardship, it warned.

The National Institute of Economic and Social Research (NIESR) said a recession is on the horizon, with gross domestic product set to shrink in the second half of this year and in the first months of 2023.

The think tank said the recession may well be a ‘relatively shallow one’ but warned there is an ‘increased possibility of a deeper recession’.

Overall, growth will be at 3.5% for this year when increases in the first half are taken into account but the rate will hover just above flatlining by the end of 2023, it warned.

The squeeze on budgets, the NIESR predicted, will mean that one in five households will have no savings by the end of 2024 and the number of people living pay cheque by pay cheque will have doubled to 6.8 million in the same period.

Ex-chancellor Rishi Sunak is on course to lose the race to be the prime minister who tackles the economic crisis to Liz Truss (Picture: Getty)

The report found that inflation will peak at around 11% in the last three months of this year but will fall back to 3% by the end of 2023.

Professor Stephen Millard said: ‘The UK economy is heading into a period of stagflation with high inflation and a recession hitting the economy simultaneously.’

He said the Bank of England will need to raise interest rates to 3%, a move which will increase government debt and hit homeowners.

The report called on the next prime minister to increase universal credit payments by £25 per week for at least six months from October, which would cost around £1.4 billion, and also to increase energy bill relief payments from £400 to £600 for 11 million low-income households, costing £2.2 billion.

It warned the 10% of poorest households will suffer if benefits don’t rise as government help on energy bills does not fully make up for the pain of inflation.

With growth either in reverse or low and inflation persistently high, low wages will complete the trio of pressures on working people.

Willian has endured an unhappy time of it since his return to Brazil with Corinthians (Picture: Getty) Former Chelsea star Willian is set for a shock return to the Premier League less than a year after his emotional return to Corinthians. The 34-year-old ended an unhappy 12-month stint at Arsenal by terminating his contract with […]

Man, 39, charged over gun attacks in Scotland which killed dad-of-six

Police believe all of the attacks to be ‘linked’ (Picture:PA) A 39-year-old man has been charged over ‘linked’ attacks in remote northwest Scotland which left one man dead and three injured. John MacKinnon, 47, was shot dead yesterday at his home in Sasaig, in the Teangue area of the Isle of Skye. From local accounts […]

Wish we were there! (Picture: GTres/SplashNews.com) Cara Delevingne and Margot Robbie have been topping up their tans while holidaying with friends in Formentera. Model Cara recently celebrated her 30th birthday in style, by living it up on a yacht under the Spanish sun, surrounded by A-list pals. She was joined by the likes of Sienna […]