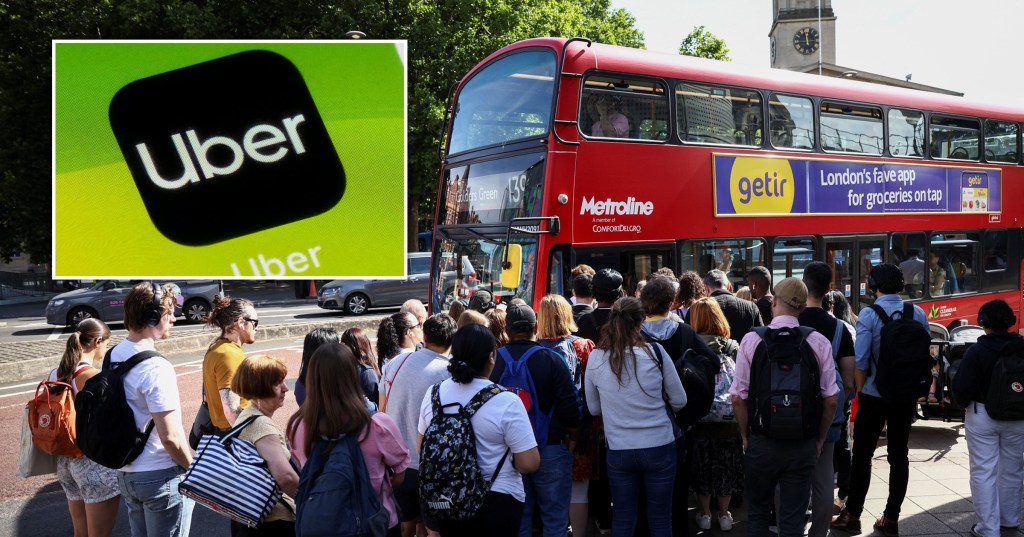 The strikes have caused disruption across the country
(Pictures: Getty / Reuters)

Passengers hit by the biggest train strike in a generation have slammed Uber after the taxi app increased fares.

More people have had to rely on the multi-billion pound company today due to industrial action bringing the rail network to a standstill.

Those travelling without a car face long queues for buses or extortionate Uber fares, with the app hiking up prices due to a spike in demand.

A three-mile journey from Paddington to King’s Cross was estimated to cost £27 at around 8.45am.

Some passengers complained about the rising prices on social media.

One person said she was charged £15 for a less than 10 minute journey.

Another said he was hit with an almost 50% surcharge.

Great uber driver tells me he “saved me this morning”.
Fair enough pal – but you did charge Â£30 quid with nearly a 50% surge.

An NHS worker shared a screengrab showing it was costing her £45 to get to work, though the length of the journey was unclear.

Another NHS worker replied saying he was quoted £50.

An Uber spokesperson said: ‘We are expecting significant increases in demand as a result of strike action across the rail network this week.

‘We are informing drivers of the expected increase in demand to help ensure there are enough cars out on the road.’

Passengers queue for a bus outside the Waterloo Station on the first day of the national rail strike in London (Picture: Reuters)

He added that the service uses ‘dynamic pricing’ which increases automatically when there’s heavy demand.

‘As a result of the strike action currently taking place on the National Rail and London Underground network, we have capped the level that prices can surge, and all users are shown the price of their trip before they book,’ he said.

‘We are also working hard to ensure that there are enough drivers out on the road to match demand.’

Brits across the country face a nightmare journey to work after thousands of members of the RMT union voted to walk out in a dispute over pay and conditions.

Only a fifth of the network is running, half the lines are closed, and those that are open will shut early this evening, at 6.30pm.

Those travelling without a car face long queues for buses or extortionate Uber fares (Picture: AFP)

Much of Britain will have no passenger trains at all, including most of …read more

Final Fantasy 7 Remake – is the original overrated? (pic: Square Enix) The Friday letters page calls for a Last Of Us Part 2 remaster, as one reader is upset at Starfield’s technical limitations. To join in with the discussions yourself email gamecentral@metro.co.uk Justified applauseI stayed up late to see the Final Fantasy 7 livestream […]

They have been named ‘an unlicensed nuisance’ (Picture: AFP via Getty Images) ‘Nuisance’ pedicab drivers in central London have been slammed with record fines amid a council crackdown. Five individuals have been charged a total of £5,682 at City of London Magistrates Court after reports of operators ‘regularly blocking pavements, playing loud music, and charging […]