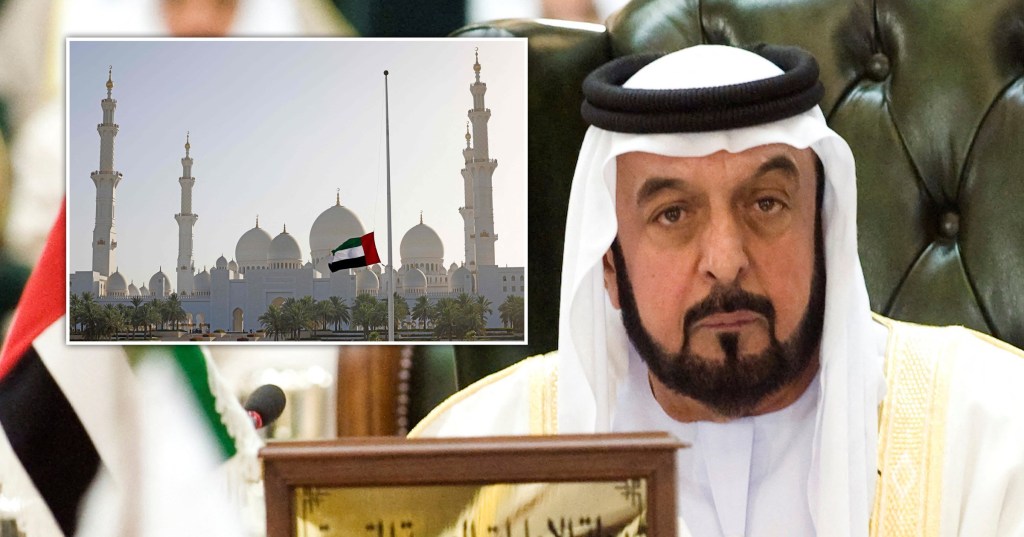 The cause of Sheikh Khalifa’s death has not yet been disclosed (Picture: Reuters/AFP)

News of his death meant the country entered a 40-day period of mourning, with private and public workplaces taking a three-day break from Friday.

Sheikh Khalifa oversaw much of the country’s blistering economic growth and was seen as a pro-Western moderniser who aligned the Gulf Arab state closer to the US.

His name was immortalised on the world’s tallest building, the Burj Khalifa, after bailing out debt-crippled Dubai during its financial crisis over a decade ago.

However, after suffering a stroke and undergoing emergency surgery in 2014, a decade after becoming president, he ceased having any involvement in the day-to-day affairs of ruling the country.

Sheikh Mohammed became a decision-maker of major foreign policy moves, such as joining a Saudi-led war in Yemen and spearheading an embargo on Qatar in recent years.

The Queen, pictured meeting Sheikh Khalifa in 2013, said he ‘will be long remembered by all who work for regional stability’ (Picture: Getty Images)

Flags in the UAE will fly at half-mast out of respect for the deceased leader (Picture: Getty Images/AFP)

The crown prince, also the deputy supreme commander of the armed forces, shepherded the UAE’s budding ties with Israel after the two normalised relations in 2020.

There was no immediate announcement on a successor, although Sheikh Mohammed is anticipated to claim the presidency at a time of high oil prices, which boost the UAE’s spending power.

‘The UAE has lost a loyal son, and the leader of its blessed empowerment journey,’ Sheikh Mohammed wrote on Twitter after his brother’s death was officially announced on state media.

Queen Elizabeth II expressed her condolences in a message to Sheikh Mohammed, writing: ‘Your distinguished brother devoted his life to serving the people of the United Arab Emirates and his relationship with its allies and friends.

‘He will be long remembered by all who work for regional stability, understanding between nations and between faiths, and for the conservation cause.

‘I offer Your Highness my sincere condolences and I extend my sympathy to the people of the United Arab Emirates.’

Boris Johnson said Sheikh Khalifa was a ‘wise and respected leader who will be missed enormously’.

He said he ‘made a personal contribution to regional stability and conservation that will long be remembered’.

‘We can still mix it up!’ – Joshua Buatsi hopeful Anthony Yarde fight can follow south London derby against Craig Richards

Yarde vs Buatsi another compelling fight at light-heavyweight (Picture: Getty/Matchroom) Joshua Buatsi is confident his clash against Craig Richards will be the first of many all-British light-heavyweight showdowns to take place soon with a meeting with Anthony Yarde still in his sights. Buatsi and Richards meet in what should be an enthralling south east London […]

How old is Richard Madeley and how long has he been married to Judy Finnigan?

Richard revealed his age on GMB this morning (Picture: Dave J Hogan/Getty Images) Richard Madeley has firmly fixed himself in the public eye this past year, following his stint on I’m A Celebrity and taking over the Good Morning Britain reigns from Piers Morgan. The TV presenter recently left GMB viewers shocked when he revealed […]

What did we learn from Kaley’s interview on The Late Late Show? Her dad is ad-or-able (Picture: CBS) Kaley Cucoo got emotional during an appearance on The Late Late Show on Monday, revealing her doting father came to watch her film every single episode of The Big Bang Theory. The actress, 36, starred as Penny […]