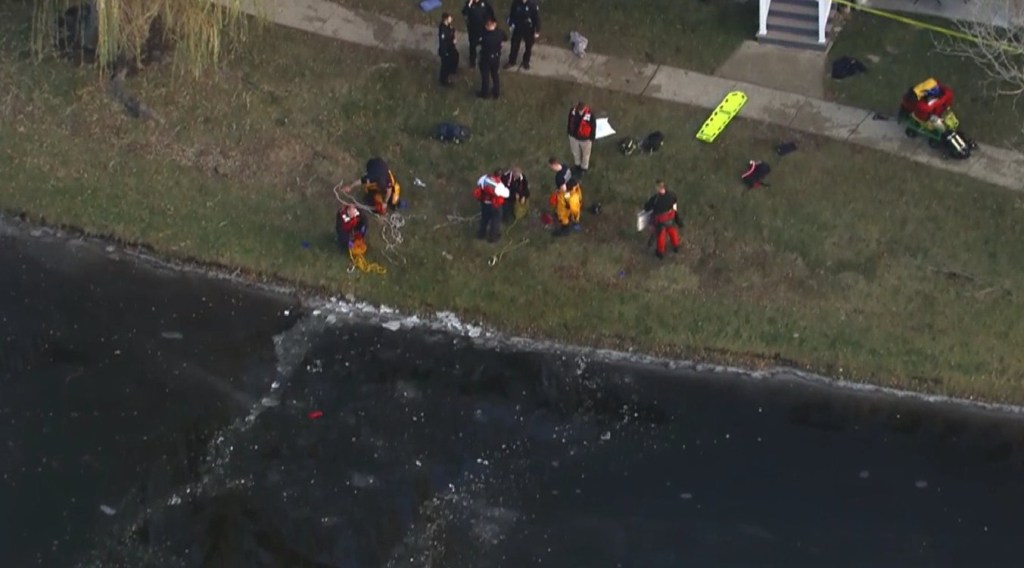 Two young boys died after being rescued from a frozen pond in the Chicago suburbs (Picture: Twitter / WGN)

Two young brothers were killed after falling into an icy pond on Wednesday, according to officials.

The family was visiting the boys’ grandmother at an apartment complex in Palatine, Illinois. The complex, called ‘The Clayson,’ surrounds a large drainage pond that had frozen over.

Around 3pm on Wednesday, they asked their mother if they could go outside and play.

First responders are seen at the pond near the Clayton apartment complex in Palatine (Picture: Twitter / CBS Chicago)

Then Ivy heard them screaming for help. She called 911, and first responders arrived to pull the duo out of the water by 3.31pm. Ivy estimated that they had been submerged for about 15-20 minutes.

Both boys died within hours of each other in the hospital on Wednesday night and Thursday morning. Their cause of death has not yet been released.

‘I never imagined having to bury my kids,’ the grieving mother told NBC Chicago. She said the two boys were inseparable, and acted as their brother’s keepers. ‘They had each other’s backs.’

Later the same day, authorities responded to another incident where a child fell through a frozen pond in the Chicago area.

In Aurora, Illinois, a 9-year-old boy walked across a frozen pond to retrieve a new football that had landed out of reach. After he fell through the ice, a woman dove into the pond to try to rescue him

Police were able to rescue the both the child and the woman in time by pulling the child out on ropes.

The daring rescue was captured on body camera and posted online on the Aurora Police Department’s Facebook page.

Is there a hosepipe ban in my area? How to check your postcode

Are you free to use your hosepipe once more? (Picture: Shutterstock / Melanie Hobson) Thames Water has announced the end of its hosepipe ban, from November 22 onwards. Now that parts of the UK are feeling frostier, you may not have been using your hosepipe all that much anyway – but if you get your […]