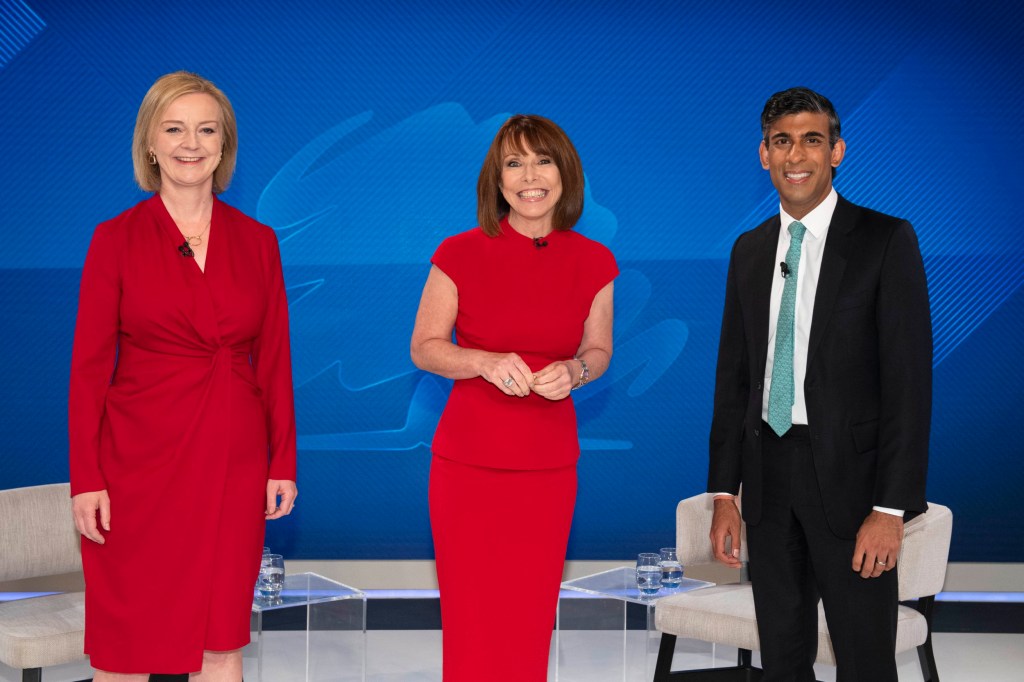 Rishi Sunak warned Liz Truss’s economic strategy will damage the nation, and that pouring ‘fuel on the fire’ will cause ‘misery for millions’.

His Tory leadership rival insisted her tax cuts could avert the recession forecast by the Bank of England.

But Mr Sunak, a former chancellor, struck back with fears her vision ‘will make the situation worse’, on the day the Bank warned inflation could peak at 13.3% in October.

Interest rates were raised to the highest level in nearly three decades, from 1.25% to 1.75%, worsening the pain for mortgage holders.

This was before the Bank predicted the economy will plunge into the longest recession since the financial crisis in 2008.

Mr Sunak told the televised debate: ‘We in the Conservative Party need to get real and fast – because the lights on the economy are flashing red and the root cause is inflation.

He stressed a need to get a grip on runaway inflation before cutting taxes, adding: ‘But it all starts with not making the situation worse.

‘Because if we just put fuel on the fire of this inflation spiral, all of us, all of you, are just going to end up with higher mortgage rates, savings and pensions that are eaten away, and misery for millions.’

Mr Sunak said there is ‘of course’ measures that can be taken to counteract a recession.

‘So what I’m not going to do is embark on a borrowing spree worth tens of billions of pounds, put that on the country’s credit card, ask our kids and our grandkids to pick up the tab because that’s not right. That’s not responsible.’

Ms Truss tsaid ‘now is the time to be bold’ in order to avoid ‘very difficult times’ (Picture: Sky News)

The financial focus of the battle to succeed Boris Johnson as prime minister only intensified with the Bank’s warnings.

Even before, the contenders’ differing strategies were already prominent as they try to win the Tory members who will select the winner.

Ms Truss reiterated her pledge to immediately reverse the national insurance increase, introduced by Mr Sunak when he was in No 11, as well as cut other taxes to prevent the job losses of a recession.

‘What the Bank of England have said today is of course extremely worrying, but it is not inevitable,’ she said.

‘We can change the outcome and we can make it more likely that the economy grows.

‘Now is the …read more

For me —and many other queer people — the win was personal (Picture: FRANCK FIFE/AFP via Getty Images) I can’t tell you how many stories I’ve heard of parents not letting their kid play football because they ‘don’t want them to become a lesbian’. Or how many times I’ve been told anecdotes of young people […]

Milly Alcock plays the young version of Rhaenyra Targaryen, the king’s daughter (Picture: HBO/Sky) The first reactions to Game of Thrones prequel House of the Dragon are in – and it sounds as though audiences are going to be in for one hell of a fiery, exciting ride when they return to Westeros. The new […]

Do Evri deliver on Sundays?

Evri cloud has a silver lining – can you expect deliveries on Sundays? (Picture: Getty) People might recall the smug look of Uncle Vernon from Harry Potter chiding Harry that there’s ‘no post on Sundays.’ Of course, he was wrong because Harry Potter is 1) fictional and 2) their network of mail carriers were owls, […]