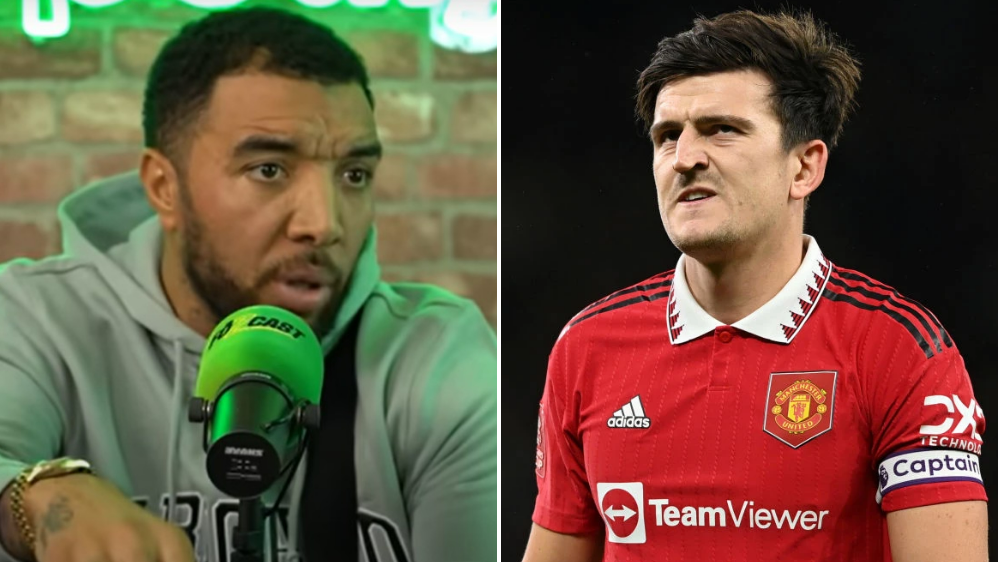 Deeney made the comments in November 2020 (Picture: Getty)

Troy Deeney has revealed Harry Maguire’s agent rang him up and ranted at him over his criticism of the Manchester United captain.

During an appearance on talkSPORT in November 2020 following United’s 1-0 defeat at home to Arsenal, Deeney questioned why Paul Pogba was bearing the brunt of criticism, insisting other senior members of Ole Gunner Solskjaer’s squad like Maguire should be equally responsible.

Appearing on Ben Foster’s Fozcast, the forward explained how in the days that followed, he received a call from Maguire’s agent Kenneth Shepherd who was furious with the comments, insisted Deeney would not have said it to Maguire’s face.

‘If I ever talk about an individual, I will always say about that game and in that moment,’ Deeney said.’ So I had an incident with Harry Maguire when I was at Watford.

‘We were speaking about Man United [on talkSPORT] and we were talking about the leadership and how it’s not just Pogba because it was about Pogba getting battered early doors. But in leadership, what about Harry Maguire, what about de Gea, what about all the senior guys, why is it just Pogba? That’s all I said.

‘I was like, “hold on one second, let’s rewind. I have said this, I didn’t say that, but I would say it to Harry’s face because I’ve got no problem.

Maguire was unaware of the call (Picture: Getty)

‘I said, “let me call him [Maguire] now and I’ll come back to you. I called him and he has no clue what’s going on.

‘So I phone the agent back and said, “listen, with the greatest respects, please don’t phone my phone giving it the big ‘un. Because I’m not that guy and you will have a problem you don’t want.”’

Deeney added that Maguire was completely unaware of the call made by the agent.

‘To be fair to Harry, he said the same thing, he said “I don’t know what that’s all about.”

‘I said, “it’s not a problem, but the way he phoned, and the aggression he was having, a younger me would have taken that a lot more personally.’

That defeat to Arsenal left United 15th in the season at that moment in time. United recovered to finish the 2020/21 in second place but Solskjaer was sacked by the club by the following year.

Since Erik ten Hag’s arrival at the summer, Maguire has lost his place in the United starting XI with reports suggesting he will among a clutch of players who …read more

Rafael Nadal lost in the second round as Novak Djokovic won the title (Picture: Getty) Rafael Nadal has joined Roger Federer in congratulating Novak Djokovic after the Serbian star made it 22 Grand Slam trophies at the Australian Open. Djokovic’s victory over Stefanos Tsitsipas on Sunday means he has now tied Nadal for the most […]

Gary Neville insists Manchester City will win the title (Picture: SkySports) Gary Neville has maintained his stance that Arsenal won’t win the Premier League this season, despite their victory against Manchester United. The Gunners went five points clear at the top of the table with a dramatic last-gasp win against the Red Devils. The victory […]

Economy is pummelled on the biggest day of action in a decade as civil servants, bus and rail staff, lecturers and teachers go on strike

Teachers’ leader Mary Bousted and RMT chief Mick Lynch protest during a march to Downing Street yesterday (Picture: Shutterstock) Half a million strikers brought much of Britain to a standstill on the biggest day of action for at least a decade – giving hard-pressed workers, business and the UK economy another battering. Walkout Wednesday saw […]